By Ece Toksabay and Tuvan Gumrukcu

ANKARA – Turkey’s lira has logged its worst year since President Tayyip Erdogan came to power nearly two decades ago, despite his appeal on Friday for Turks to trust his unorthodox policies of slashing interest rates in the face of soaring inflation.

The lira – by far the worst performer in emerging markets in 2021, as well as in the last few years – shed 44% of its value against the dollar over the year and 19% in the last week alone. [EMRG/FRX]

The currency crisis accelerated in recent months, rattling the $720 billion economy, largely due to Erdogan’s “new economic programme” focused on exports and credit despite the lira’s collapse and inflation of more than 21%.

To ease the turmoil, the president unveiled a scheme two weeks ago in which the state protects converted local deposits from losses versus hard currencies, sparking a sharp 50% rally in the lira with support from the central bank.

On Friday, Erdogan – whose opinion poll ratings are sliding ahead of an election in 2023 – called on Turks to keep all their savings in lira and shift gold into banks, saying the market volatility was largely under control.

“As long as we don’t take our own money as a benchmark, we are doomed to sink. The Turkish Lira, our money, that is what we will go forward with. Not with this foreign currency or that foreign currency,” he told a business group.

“We have been waging the battle to save the economy from the cycle of high interest rates and high inflation,” he said, reiterating his unorthodox view that high rates lift prices.


The currency crisis, the second since 2018, has badly eroded Turks’ savings and earnings while the record volatility has upended households’ and businesses’ budgets and future plans.

The lira has whipsawed from 18.4 to 10.25 versus the dollar in the last two weeks, capping its worst year since 2001, when International Monetary Fund support stemmed a crisis in Turkey.

The currency crash was triggered by the central bank’s 500 basis points of rate cuts to 14% since September, carried out under pressure from Erdogan, who appointed the bank governor in March and has since replaced much of its leadership.

Economists and former central bankers have called the easing reckless given inflation is expected to hit 30% in December due to the lira depreciation. Goldman Sachs expects it to reach as high as 40% by mid-2022.

The new deposit scheme is intended to reverse a tide of dollarisation. Under it, the state covers the difference between deposit rates and the foreign exchange and gold rate for lira converted into the new instrument.

Marek Drimal at Societe Generale said it provided some backstop, though “market participants need to see tangible steps to address underlying problems in the economy”.


Many economists have warned that if the lira continues to depreciate, the scheme could further stoke inflation and add to the state’s fiscal burden.

Some political analysts say Erdogan is betting that protecting deposits, along with a 50% hike in the minimum wage, will halt the slide in his poll ratings and open a window for early elections.

At the same time the central bank’s net foreign currency holdings – its effective buffer against financial crisis – plunged to a near two-decade low of $8.63 billion.

The central bank announced five direct interventions to support the lira in early December, including more than $2 billion in the first three efforts.

It has announced none since the anti-dollarization scheme was unveiled on Dec. 20, though its reserves drop-off signals it backed some $8 billion in additional state interventions, according to bankers and others.

Erdogan’s economic policy has sent real yields deeply negative and amounted to a red flag for foreign investors, who have fled Turkey in the last five years, a period in which the lira has shed some three-quarters of its value.


The cost of insuring exposure to Turkish debt based on five-year credit default swaps (CDS) nearly doubled over the year to 566 basis points from 305, IHS Markit data showed.

(Additional reporting by Karin Strohecker in London and Daren Butler in Istanbul; Writing by Jonathan Spicer; Editing by Alex Richardson and Hugh Lawson) 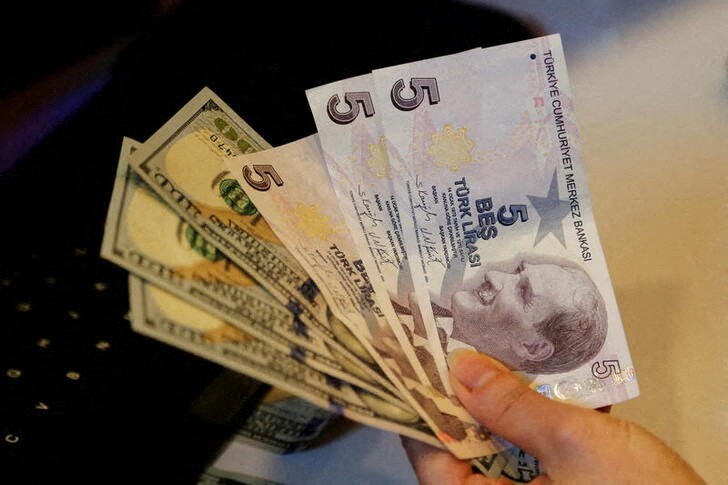