ISLAMABAD – Pakistan’s central bank chief believes the country has the capacity and financial cushion to ride out rising external account pressures being driven by a surge in global commodity prices.

The pressure should ease soon as central banks around the world tighten monetary policy, which is likely to curb rebounding global demand, he said.

“What we have to ensure is that we have the capacity to sustain ourselves through it…I believe we do,” said State Bank of Pakistan (SBP) Governor Dr Reza Baqir in an interview with Reuters on Monday.

He said the surge in global commodity prices over the past few months was being driven by a sharp recovery in demand as economies bounced back from a COVID-induced slump.

“But as central banks begin to turn hawkish, it is going to moderate global demand growth; that in turn is what is going to bring down international commodity prices,” said Baqir, who previously worked at the International Monetary Fund.

“We (Pakistan) just have to get through it until this commodity supercycle ceases,” he said, adding that two thirds of the rise in the trade deficit over the past few months had been driven by surging global commodity prices. “One third of our typical (import) payments on any given day are oil payments…and you have seen how much oil prices have risen.”

Pakistan’s imports grew 65% year-on-year to over $40 billion in the first half of this financial year, while exports rose 25% to $15.1 billion. Over the same period, the trade deficit has more than doubled to $25.4 billion from $12.3 billion.


The current account balance meanwhile turned to a deficit in the current financial year, standing at $7.1 billion in the first five months compared to a $1.9 billion surplus over the same period last year.

The rapid rise in the country’s import bill has put a strain on its foreign exchange reserves. But Baqir said these were high enough to ride out the storm, while Pakistan’s adoption of a flexible exchange rate in 2019 provided an additional buffer.

“Our flexible exchange rate system is one of the institutional reforms that has happened in Pakistan that, in turn, will help to ensure the sustainability of our balance of payments,” Baqir said.

Pakistan’s central bank has lifted rates by 275 basis points to 9.75% since September to tackle a falling Pakistani rupee, high inflation and a current account deficit. The bank signalled in December that it was likely close to done with hiking rates in the near-term. The rupee has depreciated about 10% over the past six months against the dollar.

Pakistan’s consumer price index rose 12.28% in December from a year earlier, above the central bank’s upwardly revised 9%-11% target for this financial year.

“We are confident that they (inflation worries) will be suitably addressed by the measures that we have taken,” Baqir said. 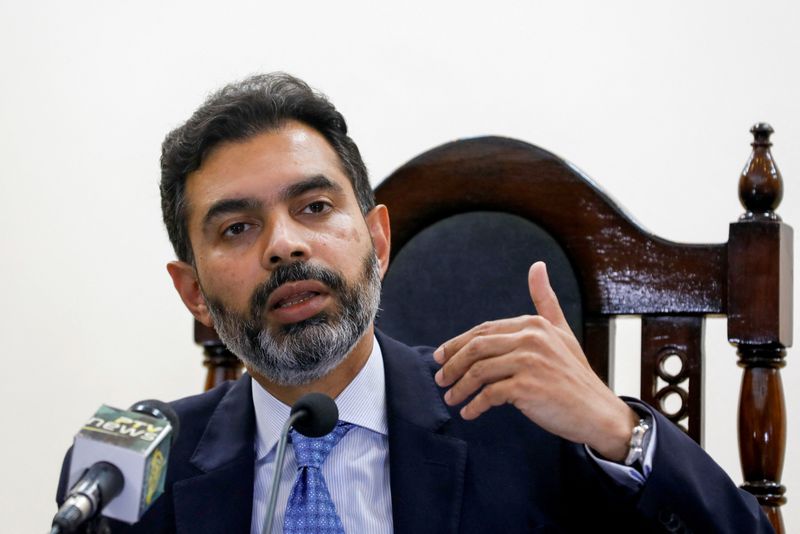