– Martin Luther King Jr.’s daughter says she believes the slain civil-rights leader would have been disappointed with efforts playing out in some parts of the United States to restrict voting rights.

“What’s going on right now would not surprise him, it would disappoint him, ” said Bernice King, who serves as chief executive of the King Center for Nonviolent Social Change in Atlanta.

Bernice King made those comments as President Joe Biden https://www.reuters.com/article/uk-usa-biden/biden-heads-to-georgia-to-reignite-voting-rights-reform-push-idUKKBN2JL1DA visited her father’s birthplace of Atlanta on Tuesday to jump start stalled efforts to reform U.S. voting rights after new laws by states that some activists say will deter Black voters from the polls.

Biden’s speech comes as Democrats gird themselves for tough 2022 midterm contests that could strip them of a congressional majority and any chance of federal changes to voting laws.

Former President Donald Trump continues to say that the 2020 election was stolen by Biden’s Democrats through voter fraud, despite recounts and investigations that found no evidence to back the claim. Since then, Republican lawmakers https://www.reuters.com/world/us/republicans-erect-voting-barriers-politically-crucial-us-states-2021-06-16 in 19 states have passed dozens of laws making it harder to vote.

Bernice King sees the recent court cases of George Floyd and Ahmaud Arbery as “a turning of the tides,” adding that they would not have been possible without fair and just district attorneys in place.

“So that’s why voting is critical, all that is tied back to our democracy, our voice, our ballot,” she said.

The youngest daughter of the iconic civil rights leader said that despite the obstacles, she was hopeful and determined to be part of the solution.


“I know that ultimately we are going to see some change and transformation. It may not be everything in one time, but we will see victories along the way.”

(Reporting by Temis Tormo in Washington; Editing by Lisa Shumaker) 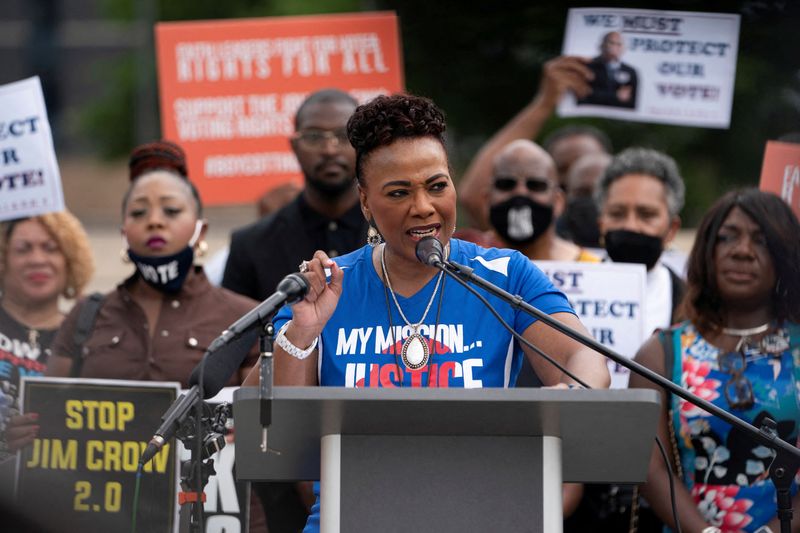