MOSCOW – Russian military forces and hardware began arriving in ex-Soviet Belarus for joint drills starting in February, Minsk said on Monday, amid soaring tensions between East and West over Ukraine.

The “Allied Resolve” exercises will be held near Belarus’s western rim, the borders of NATO members Poland and Lithuania, and its southern flank with Ukraine, Belarusian leader Alexander Lukashenko said.

“Set an exact date and let us know, so we aren’t blamed for massing some troops here out of the blue, as if we are preparing to go to war,” he told top military officials.

Troop movements by Russia are being closely scrutinised as a military buildup near Ukraine’s borders and a barrage of threatening rhetoric have stirred Western fears that Russia is planning to invade.

Moscow denies any such plan, but has used the standoff https://www.reuters.com/world/us-rallies-united-front-against-russia-putin-seeks-cracks-2022-01-14 to campaign for security guarantees from the West, including a halt to NATO expansion and a formal veto on Ukraine https://www.reuters.com/world/europe/exclusive-ukraine-suspects-group-linked-belarus-intelligence-over-cyberattack-2022-01-15, a former Soviet republic, ever joining the military alliance.

The Belarusian leader, a pariah in the West since a sweeping crackdown in 2020 and last year’s migrant crisis with the European Union, said the drills were needed as Ukraine had built up troops near Belarus.

He said Poland and the Baltics had more than 30,000 soldiers near Belarus’s borders.

Lukashenko has led the former Soviet republic that Moscow sees as a buffer state to the West since 1994 and strengthened ties with Moscow during mass protests that erupted in 2020 as the West imposed sanctions.

“These should be normal exercises to work out a certain plan for confronting these forces: the West, the Baltics and Poland, and the south – Ukraine,” he said in comments circulated by state media.

The Kremlin said separately that reports that Estonia was prepared to host up to 5,000 NATO troops showed Moscow was right to be worried.

“It’s exactly things like that which prove we have grounds to be concerned and it proves we’re not the reason for escalating tensions,” Kremlin spokesman Dmitry Peskov said.

He was asked on a conference call to comment after a senior Russian official declined to rule out or confirm whether Russia could deploy missiles in Venezuela or Cuba if the West refused to deliver Moscow’s security guarantees.

“For Latin America – we’re talking about sovereign states there, let’s not forget that. And in the context of the current situation, Russia is thinking how to ensure its own security… We are … reviewing different scenarios,” he said. 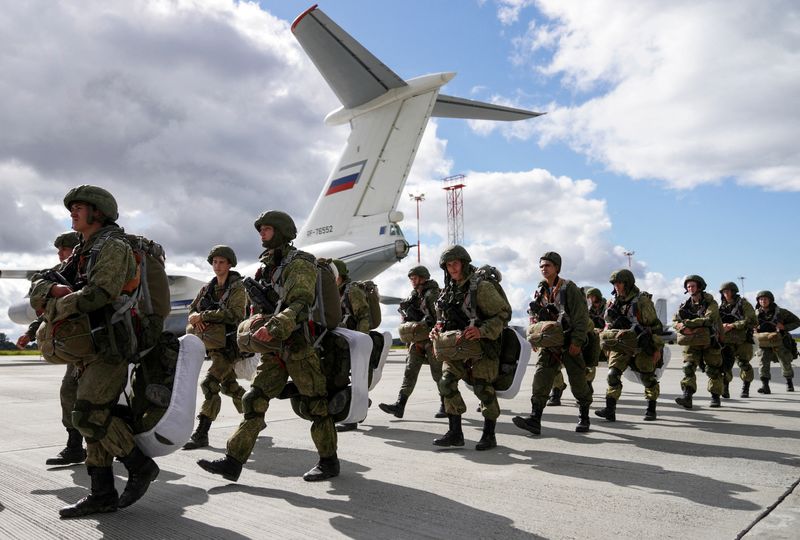