By Ghaida Ghantous and Alexander Cornwell

DUBAI – Yemen’s Iran-aligned Houthi group attacked the United Arab Emirates in what it said was an operation using missiles and drones, setting off explosions in fuel trucks that killed three people and causing a fire near the airport of Abu Dhabi, capital of the region’s commercial and tourism hub.

The strike on a leading Gulf Arab ally of the United States takes the war between the Houthi group and a Saudi-led coalition to a new level, and may hinder efforts to contain regional tensions as Washington and Tehran work to rescue a nuclear deal.

“The UAE condemns this terrorist attack by the Houthi militia on areas and civilian facilities on Emirati soil…(It) will not go unpunished,” its foreign ministry said. “The UAE reserves the right to respond to these terrorist attacks and criminal escalation.”

The UAE, a member of the coalition, has armed and trained local Yemeni forces that recently joined fighting against the Houthis in Yemen’s energy-producing Shabwa and Marib regions.

“With (nuclear) negotiators running out of time, the risk of a deterioration in the region’s security climate is rising,” said Torbjorn Soltvedt, principal MENA analyst at risk intelligence company Verisk Maplecroft.

The Houthis have frequently launched cross-border missile and drone attacks on Saudi Arabia, but have claimed few such attacks on the UAE, mostly denied by Emirati authorities.

Police said initial investigations found parts of small planes that could possibly be drones at the sites in Musaffah and Abu Dhabi airport, but they made no mention of missiles.

ADNOC said an incident at its Mussafah Fuel Depot at 10 a.m. resulted in a fire. Police closed the road leading to the area, where unverified footage on social media had shown thick smoke.

“ADNOC is deeply saddened to confirm that three colleagues have died. A further six colleagues were injured and received immediate specialist medical care,” it said.

ADNOC added that it had activated business continuity plans to ensure an uninterrupted supply of products to local and international customers.

An Etihad Airways spokesperson said a small number of flights were briefly disrupted at Abu Dhabi airport due to “precautionary measures”, but normal operations quickly resumed.

The Saudi-led alliance carried out air strikes on Yemen’s Houthi-held capital Sanaa, Reuters witnesses said, following the strike on the UAE and after the coalition intercepted eight drones launched toward Saudi Arabia on Monday.

One of the air strikes hit the home of a former military official, killing him and his 25-year-old son, a medical source and two neighbours told Reuters.


United Nations Secretary-General Antonio Guterres condemned the attack on the UAE and urged “all parties to exercise maximum restraint and prevent any escalation”, his spokesperson said.

There was no immediate comment from Iranian officials, but Iran’s Tasnim news agency reported it as an “important operation”.

Riyadh and Abu Dhabi had moved to engage directly with Iran in recent months to avoid any wider conflict that could hurt regional economic ambitions. The Yemen war is widely seen as a proxy war between Sunni Muslim Saudi Arabia and Shi’ite Iran.

“The UAE is not going to take this very lightly,” he said.

The attack coincided with a visit to the UAE by South Korean President Moon Jae-in. A Blue House official said a summit between Moon and Abu Dhabi’s crown prince was cancelled. 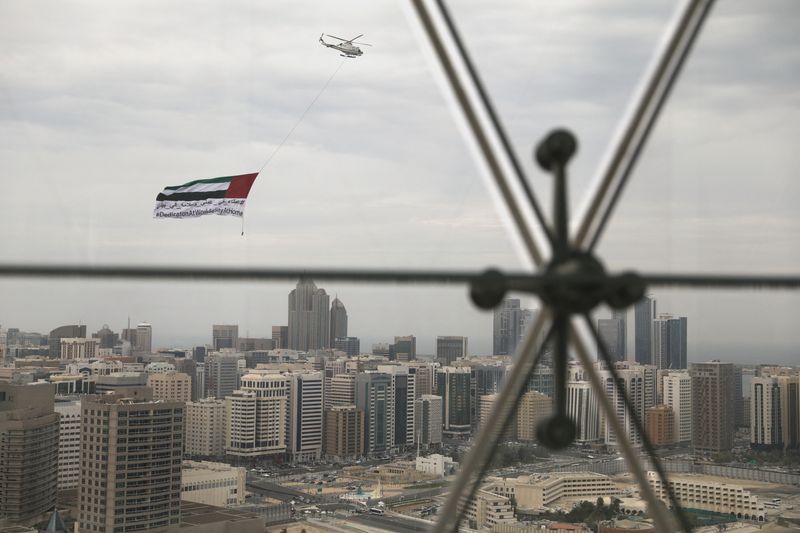