WASHINGTON – The world is “not on a good track” to meet a global goal to avoid the worst impacts of climate change and must intensify efforts to move away from fossil fuels this decade, John Kerry, the U.S. special envoy on climate change, said on Monday.

“We’re in trouble. I hope everyone understands that,” Kerry told an event called Building Momentum to UN COP27 hosted by the U.S. Chamber of Commerce and officials from Egypt, the host of the next UN climate summit.

Kerry told the event he is concerned about the recent uptick in the use of coal globally and about plans to build new coal plants without carbon capture technology.

In November, Egypt will host the next UN climate summit, known as COP27, in Sharm el-Sheikh where the government will look to showcase its own work to phase out coal https://www.reuters.com/world/middle-east/innovative-financing-can-help-unlock-promises-egypts-cop27-minister-2021-12-02 in power generation, improve management of waste water, and launch construction of public transportation projects.

Egyptian Foreign Minister Sameh Hassan Shoukry said as the host of the UN climate summit, Egypt aims to be a voice for mobilizing climate finance to support developing nations and transferring clean energy technology to African nations who are among those hurt most by climate change.

“We will be listening to the needs and priorities of Africa and other developing countries who have suffered greatly from the negative effects of climate change,” said Shoukry, who will be the president of COP27.

Kerry said actions countries have taken do not meet the severity of the problem, even though “a huge amount of good” came out of the COP26 summit in Glasgow last November, including concluding the “rule book” for executing the Paris Climate Agreement.


The UK COP26 president, Alok Sharma, also raised concern about the road ahead from Glasgow https://www.reuters.com/business/cop/britain-urges-nations-deliver-climate-pledges-this-year-2022-01-24 in a separate speech on Monday, saying that countries are struggling to find ways to deliver on the promises they made in Scotland.

He cited the struggles facing the United States, where President Joe Biden has struggled to get through a multi-billion dollar spending bill that is needed to carry out his administration’s climate pledges.

Kerry did not address the uncertain fate of the congressional bill and focused on other countries.

He said the recent uptick in coal use over the last year and plans by countries to continue building coal plants will worsen global warming and urged countries to change course.

“Most countries have the ability to deploy very significant additional amounts of renewables and they’re not choosing to do that,” he said, adding that sticking with coal or planning to build out natural gas infrastructure would lock in decades of additional greenhouse gas emissions.

Many Chamber of Commerce members support building more natural gas-fired power plants while the country transitions to renewables, and Kerry told the group he “is for gas” but only if it includes carbon capture technology.

“If it’s abated – terrific. If you can capture 100% (of the carbon and methane emissions} and it makes it affordable – that’s wonderful. But we’re not doing that,” he said. 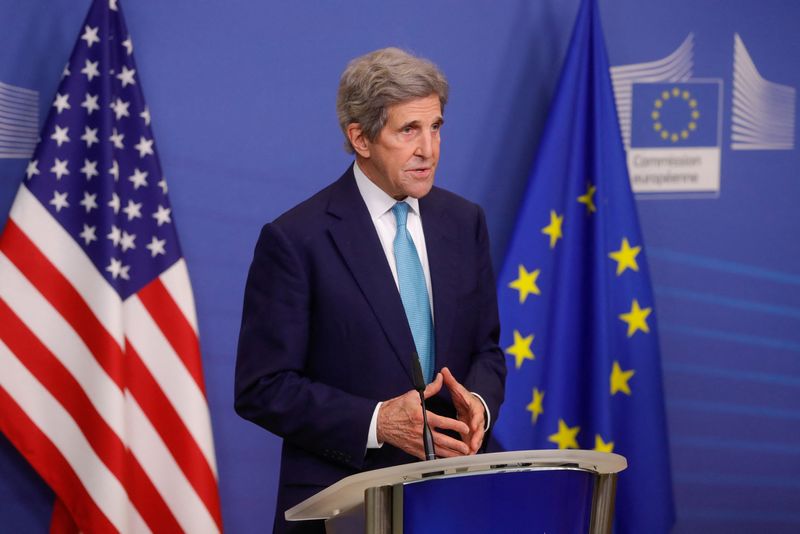 Biden Admin Blocks Yet Another Massive Mining Project, Hobbling Its Own Climate Agenda