WASHINGTON – Dominion Voting Systems Corp has told a court there is “no realistic possibility” that the voting machine manufacturer will reach settlements in its billion-dollar defamation lawsuits against Rudy Giuliani and Sidney Powell, lawyers who worked for former President Donald Trump.

Dominion and another voting software firm, Smartmatic, have brought several lawsuits against people who spread conspiracy theories related to their voting machines after the 2020 presidential election that Trump lost to President Joe Biden.

“Given the devastating harm to Plaintiffs, the lack of remorse shown by Defendants, and the fact that many of them continue to double down on their lies, Plaintiffs do not believe any realistic possibility of settlement exists,” Denver-based Dominion said in a filing https://storage.courtlistener.com/recap/gov.uscourts.dcd.225699/gov.uscourts.dcd.225699.63.0.pdf on Monday in federal court in Washington.

Lawyers for Giuliani and Powell said in the same filing that their clients may be open to settlement talks once the exchange of evidence, or “discovery,” is complete.

“Powell and Giuliani have nothing to show remorse for and dispute that they have lied about anything,” the defense lawyers said.

“There’s no particular incentive to settle with Giuliani or Powell, and it’s not just the sadistic glee of making their lives miserable by forcing this to continue,” said Don Herzog, a University of Michigan law professor.

“It’s that almost always, the party settling will stipulate in its terms of settlement: I don’t concede that I did anything wrong. And unless they’re nuts, what the corporation wants out of those two is exactly the acknowledgment that you did something wrong. So for them, there’s a pressing interest to go to trial and make them lose,” Herzog added.

Giuliani, the former New York City mayor, was the lead campaign lawyer for Trump, who continues to falsely claim the 2020 election was stolen from him through widespread voting fraud.


Trump’s campaign distanced itself from Powell in November 2020 after she appeared with Giuliani at a news conference and claimed without evidence that electronic voting systems had switched millions of ballots to Biden.

Powell the following month visited Trump at the White House and urged him to seize voting machines and to appoint her as a special counsel to investigate the election, according to the news website Axios.

Dominion has other pro-Trump media personalities and networks, including MyPillow CEO Mike Lindell and Newsmax, seeking billions of dollars in monetary damages. The defendants have argued in court filings that they engaged in free speech protected by the U.S. Constitution’s First Amendment.

(Reporting by Jan Wolfe in Washington and Helen Coster in New York; Editing by Will Dunham and Noeleen Walder) 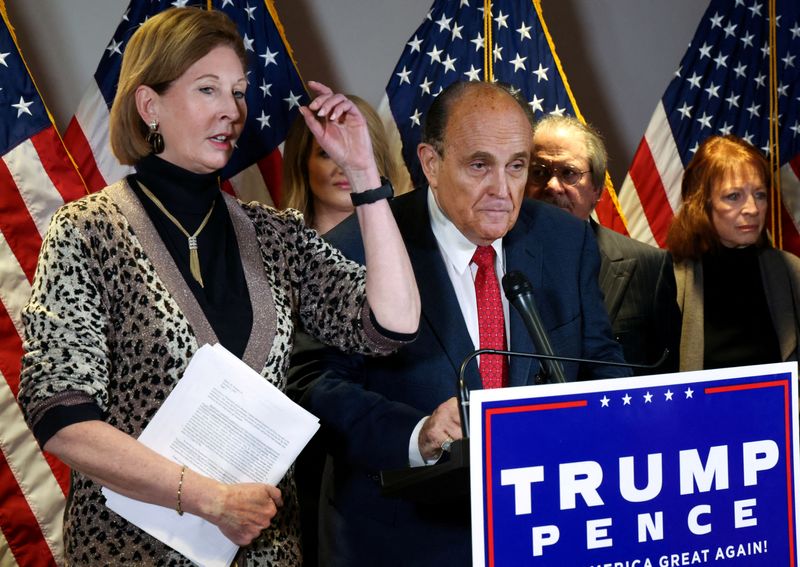