BERLIN -German business morale improved in January for the first time in seven months as easing supply bottlenecks brightened the outlook for manufacturers in Europe’s largest economy, promising a strong recovery from the coronavirus pandemic in spring.

The Ifo institute said on Tuesday its business climate index rose to 95.7 from an upwardly revised 94.8 in December. A Reuters poll of analysts had pointed to a January reading of 94.7.

“The German economy is starting the new year with a glimmer of hope,” Ifo President Clemens Fuest said.

Company executives were considerably more upbeat about their business outlook while their assessment of the current situation was a bit less optimistic, Fuest added.

In manufacturing, supply bottlenecks in intermediate products and raw materials eased a little which helped to lift both assessments of the current business situation and business expectations for the next six months, Ifo said.

Business morale also improved in the services sector with the tourism industry looking forward to a promising summer holiday season, the survey showed.

Still, service providers were less satisfied with their current situation due to COVID-19 restrictions for unvaccinated citizens who still account for roughly a quarter of the German population.

Ifo economist Klaus Wohlrabe told Reuters the improvement in business sentiment was encouraging, but it was still too early to talk about an economic turnaround.

Wohlrabe also warned that inflation was unlikely to ease in coming months as every second company across industry, trade and retail suggested in the survey it was planning further price increases.

The Ifo figures chimed with Markit’s purchasing manager index https://www.reuters.com/world/europe/easing-supply-shortages-sustains-german-manufacturing-recovery-pmi-2022-01-24 (PMI) from Monday that also showed a relaxation in supply chains which helped push up activity in the manufacturing sector to a five-month high in January.

“The German economy seems to be coming out of the winter slump,” VP Bank analyst Thomas Gitzel said.

Gitzel cautioned, however, an escalation in the conflict with Russia over Ukraine could weigh on German business morale.

The DIHK Chamber of Industry and Commerce https://www.reuters.com/markets/europe/german-firms-fear-supply-chain-pain-chinas-battle-with-omicron-2022-01-25 also pointed to the risk that the Omicron coronavirus variant could trigger more strict lockdown measures in China and result in more supply bottlenecks.

Most analysts expect the economy to stagnate or even shrink in the first three months of the year, following a drop of up to 1.0% in the final three months of 2021, according to a preliminary estimate of the federal statistics office.

The German cabinet is expected to approve its annual economic report https://www.reuters.com/article/germany-economy-gdp-idUSKBN2JV1IY on Wednesday in which Berlin will cut its GDP growth forecast for this year to 3.6% from its October estimate of 4.1%, according to a draft seen by Reuters on Friday. 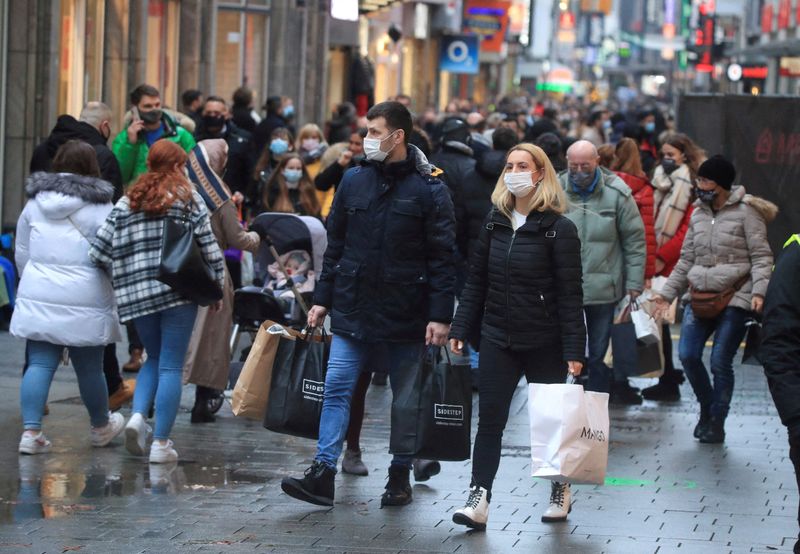