By John McCrank and Katanga Johnson

WASHINGTON – A year after the “meme stock” rally humbled hedge funds and roiled Wall Street, the U.S. Securities and Exchange Commission (SEC) is cracking down on several areas of the equity market.

“The events of last January gave us an opportunity to consider how we can further our efforts to make the equity markets as fair, orderly, and efficient as possible,” SEC Chair Gary Gensler said on Wednesday.

He was referring to so-called “Reddit rally” in which GameStop Corp and other “meme stocks” popular on Reddit and other social media surged to extreme highs on buying from investors trading heavily through Robinhood and other commission-free retail brokerages. The surge led to big losses, or a “short squeeze” for hedge funds who had bet the shares would decline.

The intense volatility prompted Robinhood and others to restrict trading in the affected stocks, curbing the rally, infuriating retail investors and rattling market confidence.

Here are issues the SEC is scrutinizing:

Gensler has criticized the “gamification of trading” in which commission-free brokerages and other digital platforms encourage excessive trading using lights, noises, notifications other psychological gimmicks common on video games.

He has also highlighted the use of artificial intelligence, predictive data analytics and machine learning to push products.


In August https://www.reuters.com/legal/transactional/us-markets-regulator-wants-public-feedback-firms-digital-engagement-practices-2021-08-27, the SEC issued a consultation on potential new rules to limit gamification and these other “digital engagement prompts.” The agency is expected to proceed with a rule change https://www.reuters.com/business/finance/will-games-stop-sec-mulls-crackdown-trading-apps-2022-01-26 in coming months.

Gensler has criticized payment for order flow (PFOF), the practice in which commission-free brokers generate revenue by sending customer orders to wholesale market makers in return for payments, rather than to exchanges.

He has floated https://www.reuters.com/article/usa-sec-gensler-markets-idCNL4N2Q13ST a ban on the practice, saying it raises potential conflicts of interest, giving brokers incentives to encourage customers to trade more frequently to maximize the payments.

Proponents say PFOF is a major reason brokerages were able to stop charging commissions, and retail investors often get a lower better price than they would on the main exchange.

The GameStop saga highlighted the small number of market-makers that dominate the retail market, which could pose competition issues, Gensler has said.

Overall, more than 40% of all trades are executed away from exchanges. That is partly due to rules that allow market makers to offer fractional sub-penny price improvement on bids and offers, whereas exchanges have to quote in pennies, which Gensler has said has created an unlevel playing field.

According to its latest public agenda https://www.reginfo.gov/public/do/eAgendaMain?operation=OPERATION_GET_AGENCY_RULE_LIST&currentPub=true&agencyCode=&showStage=active&agencyCd=3235&csrf_token=ACE6459BAE38251002FF06695AAC34E8A26DDF9AEFCB5DF139E0DAC4CD05ADBEA9212C833BBEE3FE8C7DC33AC6BDF83B2299, the SEC is considering proposing changes “to modernize rules related to equity market structure such as those relating to order routing, conflicts of interest, best execution, market concentration, and the disclosure of best execution statistics.”

Most of the stocks in the GameStop saga were heavily shorted – a strategy used to bet a stock price will fall. While the SEC said in its post-mortem https://www.reuters.com/business/fun-facts-us-sec-report-januarys-gamestop-saga-2021-10-18 of the saga that the available data did not suggest foul play when it came to such short sales, Gensler has said greater transparency of short selling may be warranted.

The agency plans to finally implement a rule created by the 2010 Dodd Frank Act that would expand the current investment position reporting requirements to include details on short sales.

The “meme stock” volatility prompted the post-trade clearinghouse that guarantees trades to demand that retail brokerages pay billions of dollars in extra collateral to guarantee trades in case either party defaults.

In response, several brokers restricted trading in the affected stocks.

Robinhood CEO Vlad Tenev said the problem was largely due the two days it takes trades to settle, and if settlements were in real time so much collateral would not be necessary.

The SEC is also mulling changes to shorten the settlement cycle to one day. 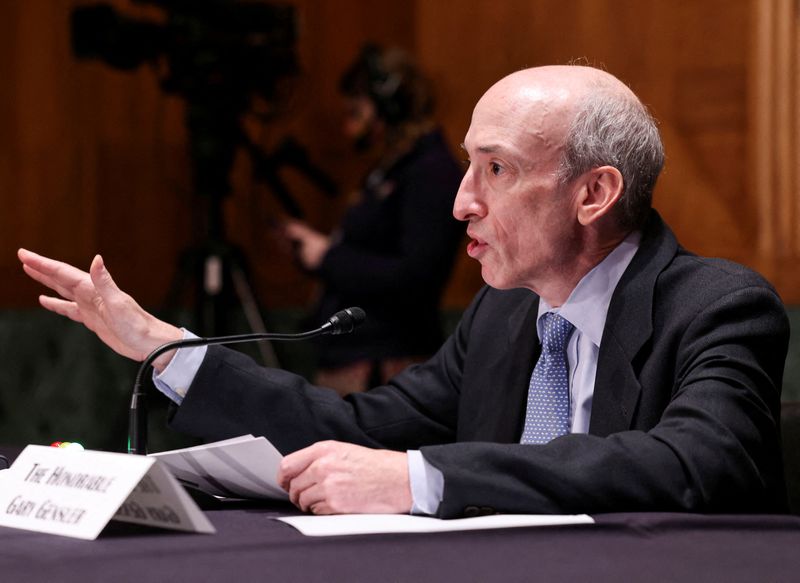