By Ann Saphir and Lindsay Dunsmuir

This time will be different.

“We are going to need to be, as I’ve mentioned, nimble about this. The economy is quite different this time,” Powell said on Wednesday following the Fed’s January policy-setting meeting at which it signaled its first interest rate hikes of the COVID-19 era would likely start in March. And from there on, it’s pretty much anyone’s guess.

“Powell put a kibosh on any type of ‘measured/gradual’ guidance, because the economic outlook is much too uncertain,” Jefferies economists Aneta Markowska and Thomas Simons wrote in a note titled: “FOMC Signals A Guidance-Light Tightening Cycle.”

For starters, inflation is far higher and the economy and labor markets are much stronger than when the Fed undertook its last set of rate rises in the previous decade, Powell said.

Then, from December 2015 to 2018, the Fed never left less than three months between rate hikes, and never raised the target rate more than a quarter-of-a-percentage-point at a time.

The policy path, Powell and other Fed policymakers promised repeatedly during that period, would be gradual. And once the Fed began shrinking its balance sheet to further tighten policy, two years after it began raising rates, it promised to do so at the pace that paint dries.

Today, inflation is near a 40-year high and the unemployment rate, at 3.9%, is within touching distance of the Fed’s goal of maximum employment.


“As we work our way through this, meeting by meeting, we are aware that this a very different expansion…Those differences are likely to be reflected in the policy that we implement,” said Powell, who used the word “nimble” at least three times.

Powell didn’t detail exactly what those differences would be, and in fact, asked directly if the Fed could be expected to raise rates in bigger intervals or was otherwise departing from its ‘gradual’ script, said policymakers hadn’t yet broached those questions.

“We will begin to address them as we move into the March meeting and meetings after that,” he said. “We fully appreciate that this is a different situation.”

In December Fed policymakers had signaled they could raise rates three times this year, but since then the inflation picture has, if anything, deteriorated, Powell said.

On the possibility of more than four rate hikes this year, “he didn’t say they wouldn’t,” said Chris Zaccarelli, chief investment officer at Independent Advisor Alliance, “which indicates a flexibility to raise rates much more quickly (if necessary) than anyone was expecting.”

Interest rate futures markets have bought fully into a faster trajectory, with the pricing there now reflecting better than even odds of five hikes of a quarter point each this year.

Powell repeatedly emphasized that the Fed’s primary job now was to bring down inflation closer to its 2% goal. Improving, if far from fully fixed, supply chains would help, as would the lack of any new fiscal stimulus in the works.

But rather than assuage concerns that the Fed might become quite aggressive as it seeks to tamp down inflation, Powell pointed to the different reality this time.

(Reporting by Ann Saphir and Lindsay Dunsmuir;Additional reporting by Michelle Price in Washington and Sinead Carew in New York; Editing by Dan Burns and Andrea Ricci) 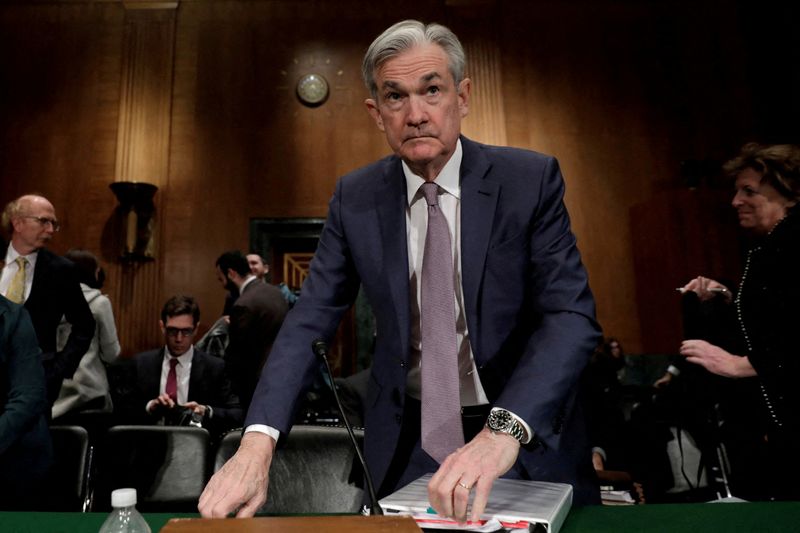