MEXICO CITY – Miguel Alejo does not know how inflation is measured or what makes a recession. But at the Mexico City food market where he has worked for over 40 years, he knows when business is struggling.

Like many colleagues working stalls in the open market in a middle-class neighborhood in the west of the city, the vegetable vendor complains bitterly of poor sales and increases in the price of goods he makes a living from.

“It’s become very tough for us here,” the 62-year-old said, as he sold broccoli, spinach and lettuce. “We’re not bringing in much because things really aren’t selling like they used to.”

“The economy has really gone down,” he added, describing December sales as “dead” and well below pre-pandemic levels.

Economic growth in the country of over 126 million people ground to a near standstill during the second half of 2021.

On Monday, the national statistics agency is due to publish a preliminary estimate for fourth-quarter gross domestic product (GDP). If the figure is negative, Mexico will likely have entered a technical recession.

Brokerage Monex reported recently that data suggested the economy had entered a “recessionary dynamic” as it clawed back ground after the pandemic led to a GDP contraction of 8.5% in 2020.

Some forecasters now believe the economy may not even have grown 5% last year, and an increasing number expect GDP to have gone backwards in the final quarter.

Jonathan Heath, a board member of Mexico’s central bank, said last week that if there are no revisions to prior quarters, GDP could have shrunk 0.5% quarter-on-quarter.

GDP had gone negative even before the pandemic began, and worries are growing that the $1.3 trillion economy could be smaller when President Andres Manuel Lopez Obrador’s six-year term ends than it was when he took office in December 2018.

U.S. economic growth in 2021 outpaced that of Mexico, where the tepid economy could encourage more people to migrate and try their luck in the United States.

Lopez Obrador has prioritized assisting Mexico’s poorest, and analysts said his welfare schemes have helped offset the pandemic’s impact at the lower end of the spectrum.

But he has also unsettled investors, accusing companies of conspiring with past governments to bilk taxpayers and trying to renegotiate their contracts. Gross fixed investment levels are about 16% lower than when he was elected in July 2018.

This month, Lopez Obrador said the worst of the pandemic has passed and the economy was on the right track. But plenty of Mexicans are not convinced.

“It makes me angry because it’s not true, that’s why (Lopez Obrador) needs to go out and be with the people so they realize how things really are, not just the statistics and the data that they give him,” said Noemi Santiago, a 59-year-old Mexico City homemaker. “The economy is very slow.”

Also, prices are rising fast. Headline inflation was 7.13% in the first half of January. The core index of inflation, which strips out some volatile items, surged above 6%, the highest in two decades.

“Everything is very expensive and there’s hardly any profit margin,” 59-year-old fruit vendor Felix Rodriguez said in the market. “There isn’t much money circulating, I don’t exactly know why, but we’re feeling it here.”

Gabriela Siller, an economist at Grupo Financiero BASE, said economic stagnation and high inflation was a recipe for a feared combination: stagflation. 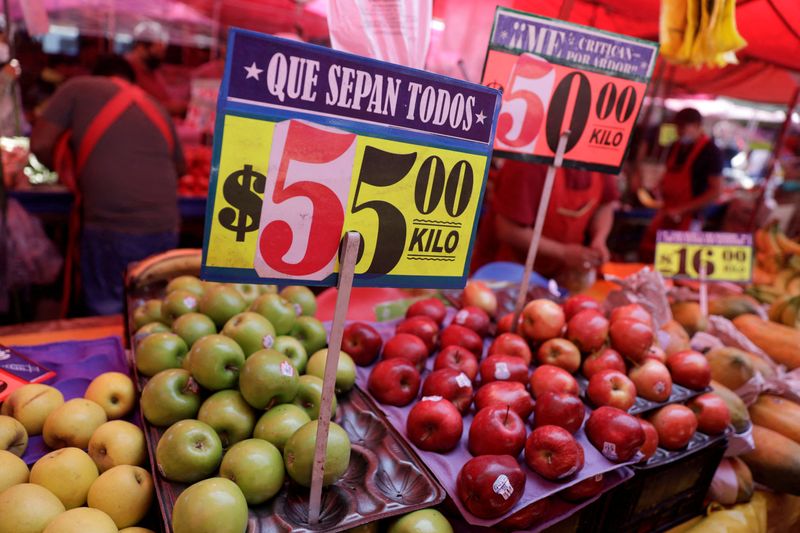