BUENOS AIRES -Argentina has struck an agreement in principle with the International Monetary Fund over a new $44.5 billion standby deal, both sides said on Friday, a major breakthrough in tense talks to restructure loans the country cannot repay.

The South American country has been locked in talks for over a year with the IMF over a new program to revamp debt outstanding from a failed $57 billion loan deal from 2018, the fund’s largest ever. It faced a $700 million payment due Friday.

“We had an unpayable debt, which left us without a present and a future. Now we have a reasonable agreement that will allow us to grow and meet our obligations through growth,” President Alberto Fernandez said in an address to the nation.

He said the agreement would not limit Argentina’s economic plans or spending, which had been something of a red line for a country emerging from years of recession and the harsh impact of the COVID-19 pandemic.

The IMF said in a statement that its staff had reached an “understanding” with the government over key policies that would underpin the final deal, including the path toward fiscal consolidation, which had been a key sticking point in the talks.

“IMF staff and the Argentine authorities have reached an understanding on key policies as part of their ongoing discussions of an IMF-supported program,” Luis Cubeddu, mission chief for Argentina, said in a statement.

The deal would allow for spending increases on infrastructure, science and technology, and would protect targeted social programs, the IMF said, while energy subsidies would be reduced “in a progressive manner”.


The two sides will continue their work in the coming weeks towards reaching a staff-level agreement, the IMF added.

Recent uncertainty over a deal has hammered Argentina’s sovereign bonds, while anti-IMF rhetoric has risen in the grain-producing country, with some protesters on Thursday calling for the government to suspend repayments.

“It’s far from a perfect deal, but it means the current government will be able to muddle through economically and investors can start to focus on political change in next year’s (presidential) elections,” said Ted Pincus at Switzerland-based fund Mangart Capital.

“The IMF seems to have capitulated to political pressure.”

Argentina’s Economy Minister Martin Guzman said in a news conference that under the deal the country would target reducing its fiscal deficit to 0.9% by 2024 and gradually end central bank financing to the Treasury.

“We hope to reach our deficit objectives with real spending that does not stop the economic recovery and to be able to gradually strengthen tax collection,” Guzman said.

He ruled out an abrupt exchange rate devaluation, said the country would seek to have positive real interest rates and bring down rampant inflation currently running at above 50% on an annual basis, which hurts savings and salaries.


Argentina and the IMF had been at loggerheads in talks over how quickly Argentina should reduce its fiscal deficit, with the country arguing it needed to be able to maintain spending to preserve the fragile economic growth recovery.

Nikhil Sanghani, Latin America economist at Capital Economics, said that the deal — after months of “hardball” tactics — would bring “some relief to international bondholders in the near term”, though many issues remained.

“This is just the start of a long journey to fix Argentina’s macroeconomic imbalances, and there is still a lot that could go wrong over the coming years,” he said in a note. 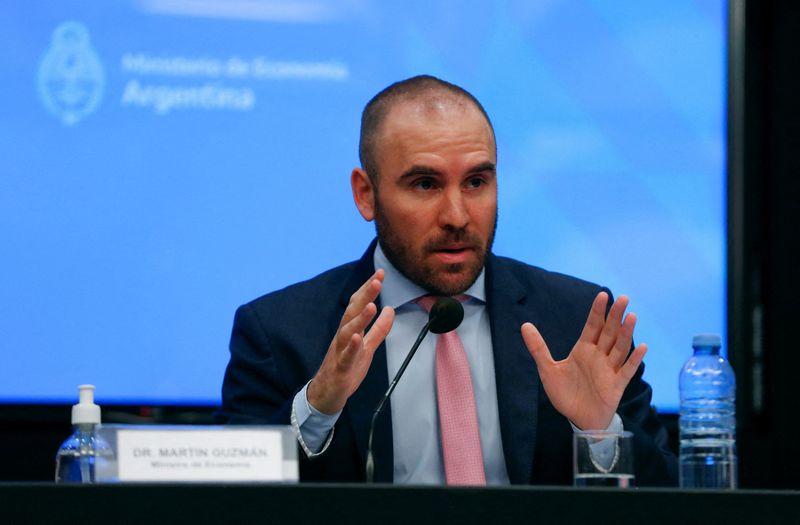