By Trevor Hunnicutt and Gustavo Palencia

TEGUCIGALPA -Xiomara Castro was sworn in as Honduras’ first woman president on Thursday in front of a cheering crowd including U.S. Vice President Kamala Harris, who pledged U.S. government support to stem migration and fight corruption.

Castro’s inauguration ends the eight-year rule of Juan Orlando Hernandez, a one-time U.S. ally who has been accused in U.S. courts https://www.reuters.com/article/us-usa-honduras/honduran-president-target-of-u-s-investigation-court-filings-show-idUSKBN2A8291 of corruption and links to drug traffickers. Even as Hernandez left office a U.S. congresswoman called for him to be indicted, and for requests to be made for his extradition.

Castro, flanked by her husband, former President Manuel Zelaya, was sworn in at a packed soccer stadium where supporters applauded her vows to fix the country’s massive debt burden.

“The economic catastrophe that I’m inheriting is unparalleled in the history of our country,” a somber Castro said in her inaugural address.

Her government also faces tests over a sharply divided Congress, and relations with China due to Honduras maintaining diplomatic ties with Taiwan.

Harris, who was loudly applauded when introduced during the inauguration, congratulated Castro over her “democratic election.”

In a meeting shortly after the ceremony, Harris promised to collaborate on migration issues, economic development and fighting impunity, and said she welcomed Castro’s plans to request United Nations help to establish an anti-corruption commission.

Harris has been tasked with addressing the “root causes” of migration in Central America’s impoverished Northern Triangle of countries, but her trip comes as U.S. President Joe Biden’s popularity at home has waned and his immigration strategy https://www.reuters.com/article/us-usa-immigration-children-insight-idCAKBN2C21FH has stalled https://www.reuters.com/world/us/bidens-immigration-goals-fade-after-setbacks-us-mexico-border-2022-01-20.


“We do very much want and intend to do what we can to support this new president,” said one administration official.

Castro tweeted that she appreciated Harris’ visit and the Biden administration’s willingness to support the Honduran government.

The two did not discuss China, she told reporters.

U.S. officials want to work with Castro both to curb illegal immigration from Central America and shore up international support for Taiwan as part of its efforts to stem China’s influence.

Honduras is one of the few countries maintaining diplomatic ties with Taipei instead of Beijing, and Castro during her campaign backtracked on comments that she might switch allegiance to China as president.

Luis Leon, director of the Netherlands Institute for Multiparty Democracy in Central America, said Harris’ arrival was a boost for Castro in the dispute over control of Congress and in addressing Honduras’ weak economy.


Castro said it was “practically impossible” to make current debt payments without a restructuring, after debt jumped sevenfold under her two conservative predecessors.

The country’s total debt stands at about $15.5 billion, or nearly 60% of gross domestic product, an economic problem Castro frequently highlighted ahead of her landslide win in November.

“My government will not continue the maelstrom of looting that has condemned generations of young people to pay the debt they incurred behind their back,” she added.

She vowed to immediately give more than 1 million poor Hondurans free electricity, with bigger consumers subsidizing the cost.

Castro, who describes herself as a democratic socialist, has vowed to tackle corruption, poverty and violence, chronic problems that have fueled U.S.-bound migrants.

But her legislative program has been jeopardized https://www.reuters.com/world/americas/honduras-next-president-blasts-party-betrayal-congress-2022-01-21 by renegade politicians from her leftist Libre party who allied with the opposition National Party to vote for one of its members to head Congress, breaking a pact with a key electoral ally.

Castro also takes office at a time of controversy for her predecessor Hernandez, who had served a maximum two consecutive terms as president and had been a longstanding U.S. ally in immigration and anti-narcotics operations.

U.S. Congresswoman Norma Torres has called for Hernandez’s indictment on drug charges, and for U.S. officials to request his extradition.

But Hernandez may be shielded from extradition for up to four years, as he was sworn in https://www.reuters.com/world/americas/hours-out-office-honduras-ex-president-gains-immunity-through-regional-post-2022-01-28 as a member of the Central American parliament shortly after Castro’s inauguration.


He has repeatedly denied accusations of corruption and links to drug traffickers.

Hernandez’s brother last year was sentenced by a U.S. judge to life in prison plus 30 years for drug trafficking. 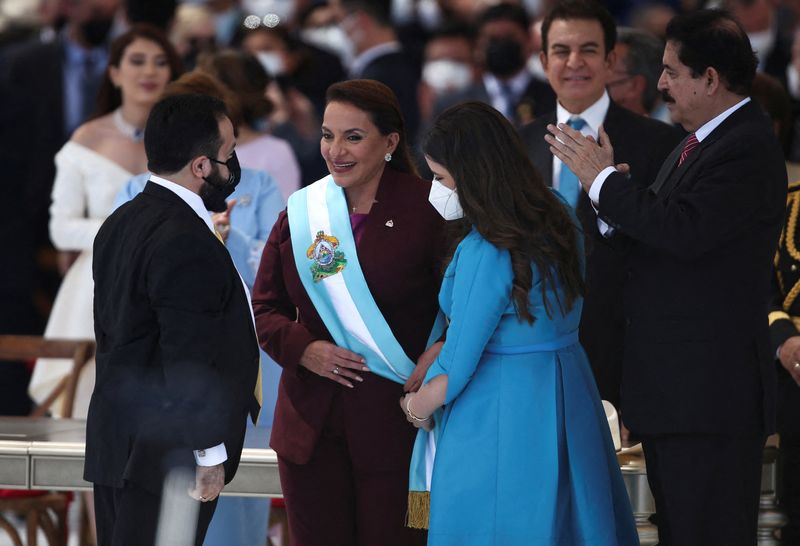 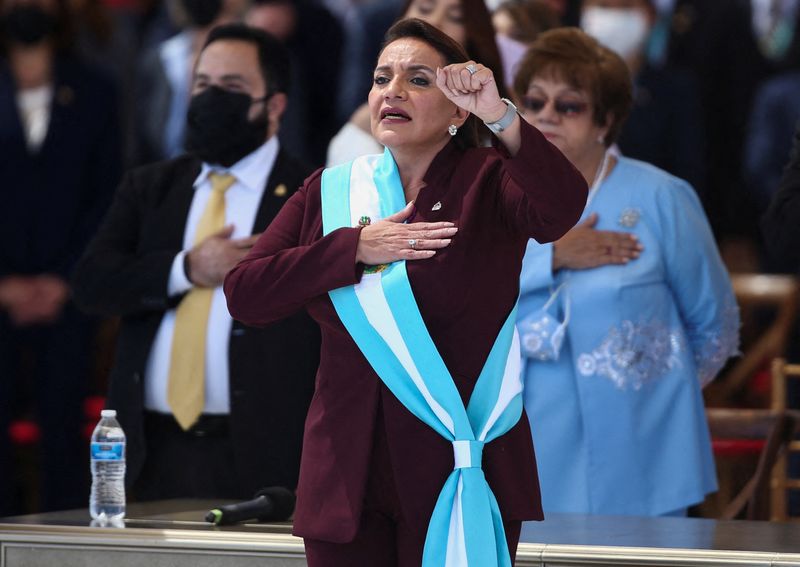 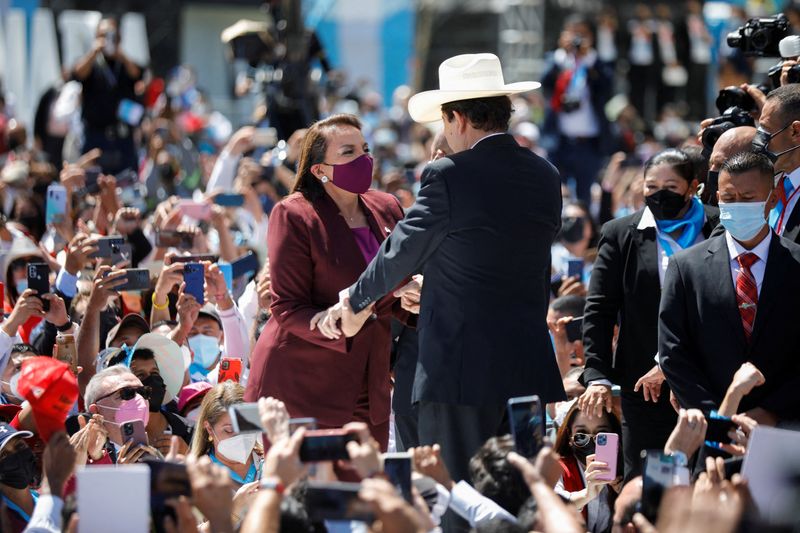 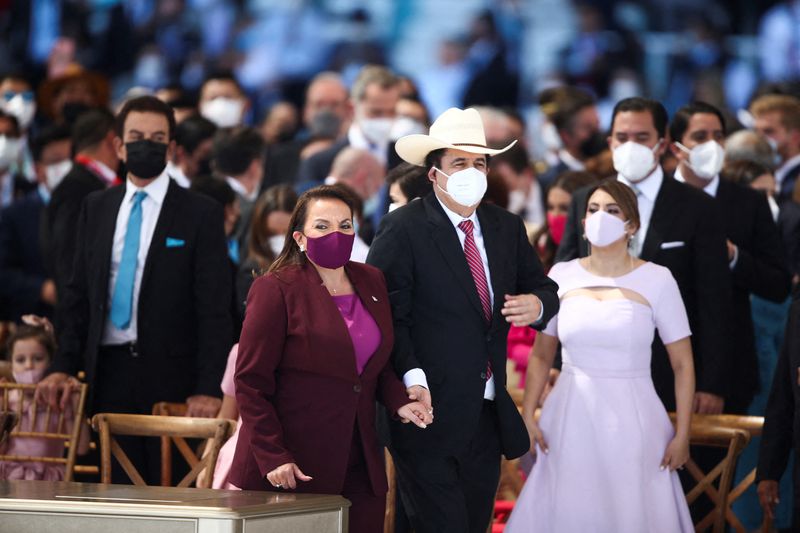 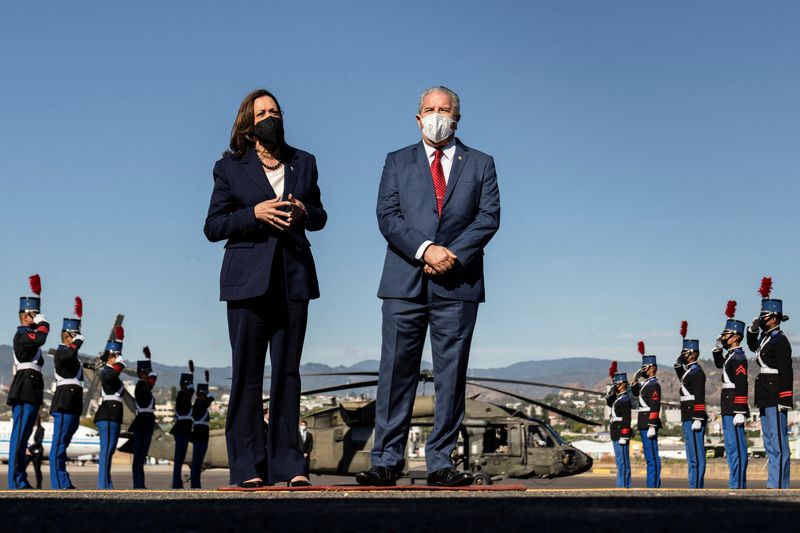