WASHINGTON – Scientists have detected what appears to be an incredibly dense star behaving unlike anything else ever seen – and suspect it might be a type of exotic astrophysical object whose existence has until now been only hypothesized.

It may be the first known example of what is called an “ultra-long period magnetar,” they said. This is a variety of a neutron star – the compact collapsed core of a massive star that exploded as a supernova – that is highly magnetized and rotates relatively slowly, as opposed to fast-spinning neutron star objects called pulsars that appear from Earth to be blinking on and off within milliseconds or seconds.

“It’s mind-bogglingly wonderful that the universe is still full of surprises,” said radio astronomer Natasha Hurley-Walker at the Curtin University node of the International Centre for Radio Astronomy Research (ICRAR) in Australia, lead author of the study published this week in the journal Nature.

The object may be continuously beaming strong radio waves from its north and south poles. As that beam swept through the line of sight from Earth’s vantage point, it appeared to switch on every 18 minutes and 11 seconds for about 30 to 60 seconds, then off again. That is an effect similar to a lighthouse with a rotating light that seems to blink on and off from the perspective of a stationary observer.

It was found in a broader research effort mapping celestial sources of radio waves.

“This is an entirely new kind of source that no one has ever seen before,” Hurley-Walker said. “And while we know the Milky Way must be full of slowly spinning neutron stars, no one expected them to be able to produce bright radio emission like this. It’s a dream come true to find something so totally unexpected and amazing.”

It is located relatively close to Earth in cosmic terms, roughly 4,200 light years – the distance light travels in a year, 5.9 trillion miles (9.5 trillion km) – away.

“It’s incredibly bright when it’s ‘on.’ It’s one of the brightest radio sources in the sky,” said study co-author Tyrone O’Doherty, a Curtin ICRAR node doctoral student who found the object.

It fits into a category called “transients” – astrophysical objects that appear to turn on for limited amounts of time. “Slow transients” like a supernova can suddenly appear then disappear a few months later as the stellar explosion dissipates. Pulsars are “fast transients,” rapidly blinking on and off. Transients between these two extremes had remained elusive until now.

Neutron stars including pulsars are among the universe’s densest objects. They are roughly 7.5 miles (12 km) in diameter – akin to the size of a city – but with more mass than our sun. A neutron star with an extreme magnetic field, a magnetar, could potentially power the radio pulsations, the researchers said.

As for why its rotation is so slow, it could be that it is very old and has slowed over time, according to Curtin ICRAR node astrophysicist and study co-author Gemma Anderson.

“This is more likely to be the ‘first of its kind’ rather than ‘one of a kind,” Anderson said.

It also perhaps could be another type of dead star called a white dwarf or something completely unknown, Hurley-Walker said.

The researchers have not detected it since 2018.

“We are now monitoring this object using many different radio telescopes in the hope it switches ‘on’ again,” Anderson said. 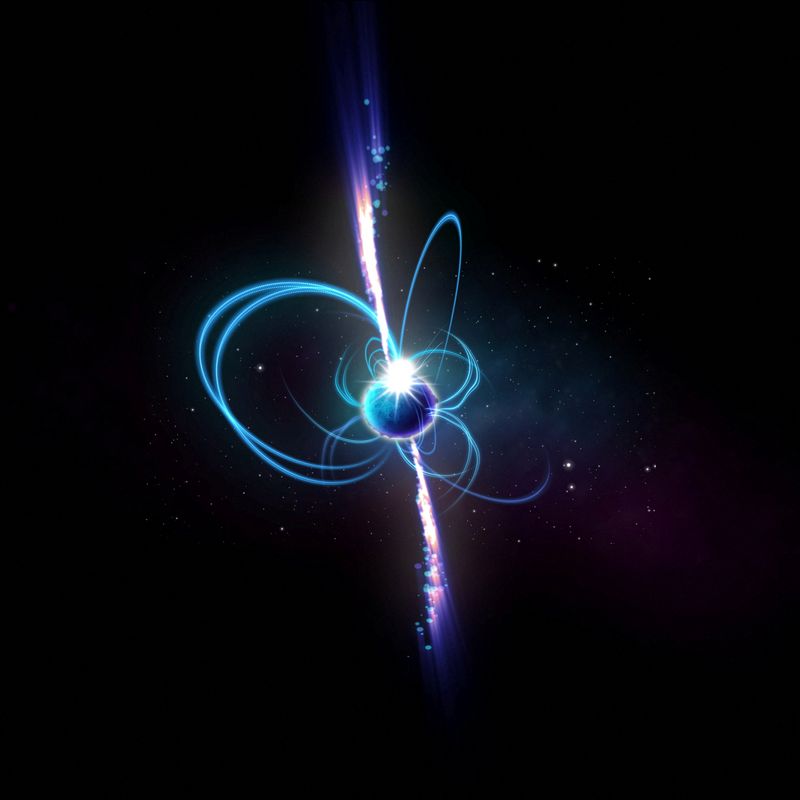