PRAGUE – Thousands of Czechs massed in Prague’s Wenceslas Square on Sunday, waving flags and chanting slogans against COVID-19 restrictions, even as infections surge.

Protesters mainly objected to harsher restrictions for the unvaccinated, including a ban on eating in restaurants.

“The state should listen to the people’s demands. The arrangements and restrictions lead us on the road to hell,” Zuzana Vozabova who banged a drum through the protest, said.

The country of 10.7 million reported its highest daily tally of cases on Wednesday – 54,689, and the numbers on other recent days have ranked among the highest since the start of the epidemic.

Despite the soaring numbers, the government scrapped a decree last week making COVID-19 vaccinations mandatory for key professionals and over-60s to avoid “deepening fissures” in society.

The centre-right ruling coalition of Prime Minister Petr Fiala has shortened quarantine and isolation times as it braced for the Omicron variant, while launching mandatory testing of employees at companies.

Hospitalizations stood at 1,989 as of Saturday, far below the numbers of around 7,000 reported during the previous peak at the turn of last November and December.

The country has reported 37,184 coronavirus deaths since the start of the pandemic, one of the world’s worst rates per capita. 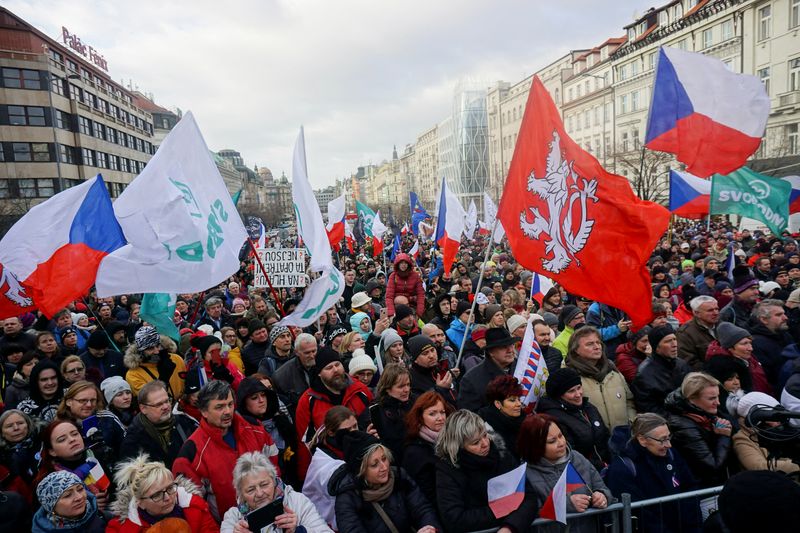