SYDNEY – Australia’s central bank kept its cash rate at a record low of 0.1% on Tuesday and ended its A$275 billion ($194.40 billion) bond buying campaign as expected, but pushed back hard on market wagers for an early rate rise.

Wrapping up its February policy meeting, the Reserve Bank of Australia (RBA) emphasised that ceasing bond purchases did “not imply” a near-term increase in interest rates and the Board was still prepared to be patient.

The dovish message saw the local dollar slip 0.4% to $0.7036 in response. Lowe is set to give a speech on policy on Wednesday and the bank will release a full set of economic forecasts on Friday.

Most analysts had expected an end to bond buying as such quantitative easing was no longer required with unemployment falling to 13-year lows of 4.2% and core inflation surging to seven-year highs of 2.6%. [AU/INT]

The latter was a major shock given the RBA had thought core inflation would not reach 2.5% until the end of next year.

As a result, Lowe said core inflation was now forecast to rise to around 3.25% in coming quarters, before easing to 2.75% over 2023. Unemployment was seen falling to below 4% later this year and to be around 3.75% at the end of next year.

Markets have long been wagering the RBA will ultimately blink on inflation and raise rates as early as May, with another four hikes to 1.25% priced in by December.


A May move would also be a political hot potato given a national election is likely to be called for that month.

New Zealand’s central bank has already hiked twice in the face of global inflationary pressures, and the U.S. Federal Reserve has flagged its first tightening for March.

The RBA, however, is still prepared to wait for wages to pick up after years of sub par outcomes. Lowe wants to see annual wage growth reach 3% or more, up from the current 2.2% and a pace not seen since 2013.

“Wages growth also remains modest and it is likely to be some time yet before aggregate wages growth is at a rate consistent with inflation being sustainably at target,” Lowe repeated on Tuesday.

A surge in coronavirus cases did hit consumer spending in January, but that followed a binge in the December quarter that points to considerable economic momentum.

The RBA still expected economic growth to run at a solid 4.5% this year, before slowing to 2% over 2023.

“The Omicron outbreak has affected the economy, but it has not derailed the economic recovery,” Lowe concluded. 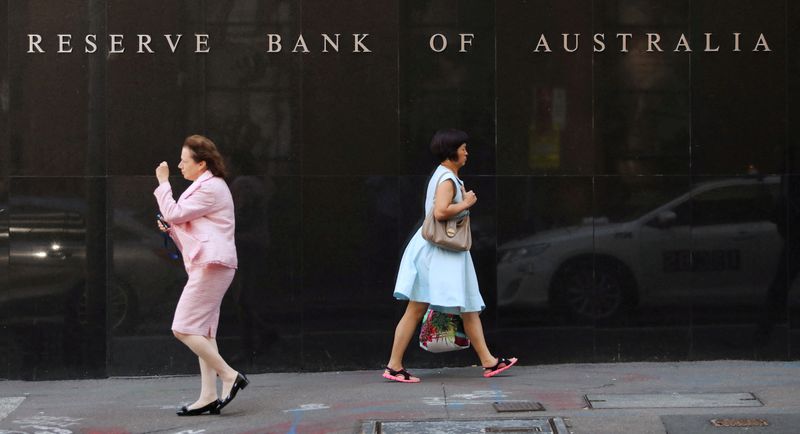