– Russia has massed troops near Ukraine and the West has threatened economic sanctions if it launches an invasion. Moscow denies planning an invasion but has demanded sweeping Western security guarantees in a tense standoff.

Here is a timeline of the main events in Ukraine’s political history since it won independence from Moscow in 1991.

* 1991: Leonid Kravchuk, leader of the Soviet republic of Ukraine, declares independence from Moscow. In a referendum and presidential election, Ukrainians approve independence and elect Kravchuk president.

* 2004: Pro-Russian candidate Viktor Yanukovich is declared president but allegations of vote-rigging trigger protests in what becomes known as the Orange Revolution, forcing a re-run of the vote. A pro-Western former prime minister, Viktor Yushchenko, is elected president.

* 2005: Yushchenko takes power with promises to lead Ukraine out of the Kremlin’s orbit, towards NATO and the EU. He appoints former energy company boss Yulia Tymoshenko as prime minister but, after infighting in Ukraine’s pro-Western camp, she is sacked.

* 2008: NATO promises Ukraine it will one day join the alliance.

* 2010: Yanukovich defeats Tymoshenko in a presidential election. Russia and Ukraine clinch a gas pricing deal in exchange for the extension of the lease for the Russian navy in a Ukrainian Black Sea port.


* 2013: Yanukovich’s government suspends trade and association talks with the EU in November and opts to revive economic ties with Moscow, triggering months of mass rallies in Kyiv.

* 2014: The protests, largely focused around Kyiv’s Maidan square, turn violent. Dozens of protesters are killed. In February, parliament votes to remove Yanukovich, who flees. Within days, armed men seize parliament in the Ukrainian region of Crimea and raise the Russian flag. Moscow annexes the territory after a March 16 referendum which shows overwhelming support in Crimea for joining the Russian Federation.

– In April, pro-Russian separatists in the eastern region of Donbass declare independence. Fighting breaks out which has continued sporadically, despite frequent ceasefires, into 2022.

– In May, businessman Petro Poroshenko wins a presidential election with a pro-Western agenda.

– In July, a missile brings down passenger plane MH17 en route from Amsterdam to Kuala Lumpur, killing all 298 people on board. The weapon used is traced back by investigators to Russia, which denies involvement.

* 2017: An association agreement between Ukraine and the EU is passed, opening markets for free trade of goods and services, and visa-free travel to the EU for Ukrainians.

– Former actor and comedian Volodymyr Zelenskiy defeats Poroshenko in an April presidential election, and promises to tackle corruption and end the simmering conflict in eastern Ukraine. His Servant of the People party wins a July parliamentary election.

– U.S. President Donald Trump asks Zelenskiy in July to investigate Joe Biden, then his rival in the U.S. presidential race, and Biden’s son Hunter Biden over possible business dealings in Ukraine. The call eventually leads to a failed attempt to impeach Trump.

* June 2020 – IMF approves a $5 billion lifeline to help Ukraine stave off default during a pandemic-induced recession.

* Feb. 2021 – Zelenskiy’s government imposes sanctions on Viktor Medvedchuk, an opposition leader and the Kremlin’s most prominent ally in Ukraine.

* Spring 2021 – Russia masses troops near Ukraine’s borders. They are partly dispersed after what Russia says was a training exercise.

* Dec 17 – Russia presents detailed security demands including a legally binding guarantee that NATO will give up any military activity in eastern Europe and Ukraine.

* Jan 14 – A cyberattack warning Ukrainians to “be afraid and expect the worst” hits Ukrainian government websites.

* Jan. 17 – Poroshenko returns to Ukraine to face charges in a treason case. Russian forces start arriving in Belarus, to the north of Ukraine, for joint drills.

* Jan 28 – Putin says Russia’s main security demands have not been addressed but that Moscow is ready to keep talking. 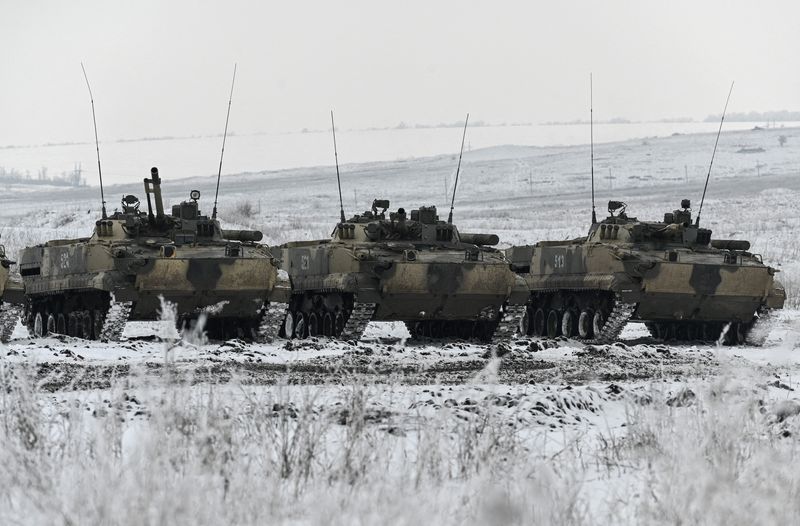