By Jason Lange and Alexandra Ulmer

-Donald Trump’s fundraising slowed in late 2021 but the former leader still amassed more than $100 million in cash that could help Republicans in their bid to win congressional majorities later this year, disclosures released on Monday showed.

Trump’s main fundraising committee, known as Save America, took in about $23 million between July and December of last year, down from $62 million in the first half of 2021, according to reports to the Federal Election Commission.

Trump, now about one year out of office after losing the 2020 presidential election to Democrat Joe Biden, remains popular among Republicans as he continues to falsely state he lost the election due to fraud.

The slowdown in his fundraising raised eyebrows among Republicans.

“The further Trump gets away from the White House, the harder it seems to be for him to raise money,” said Dan Eberhart, a prominent Republican donor and the CEO of oilfield services company Canary, LLC.

While Trump has strongly hinted he could run for president again in 2024, campaign finance rules forbid him from funding his own candidacy with money raised by Save America.

But Trump is spending large sums to hold political rallies that ostensibly support Republican candidates but which feature his own speeches as the main event.

“Trump very well may find a way to spend the money he raised in 2021 in support of a 2024 campaign and get away with it,” said Paul Ryan, a campaign finance specialist at Common Cause, a nonpartisan group that advocates for government reform.


In the second half to 2021, Save America paid event management company Event Strategies, Inc more than $1.4 million, according to Save America’s financial disclosure.

Trump has endorsed dozens of Republican candidates, including several who are mounting challenges against Republicans who voted with Democrats to impeach Trump on a charge he incited a deadly assault on the Capitol on Jan. 6, 2021.

Save America, which ended 2021 with $105 million in cash, has contributed just $1.35 million to “like-minded causes and endorsed candidates,” according to sums released by Trump’s office.

The group in July made a $1 million donation to the Conservative Partnership Institute, which currently lists Trump’s former White House chief of staff Mark Meadows as a senior partner.

Trump’s former campaign committee, now dubbed the Make America Great Again PAC, had $6.7 million in cash at the end of the year, with much of its outlays in the second half of the year going to legal expenses, according to a separate financial disclosure.

Save America and the former campaign together spent more that $290,000 on rent, catering, meetings and lodgings at Trump properties during the period, the disclosures showed. In addition, Make America Great Again spent more than $52,000 in rental and meeting expenses at Trump’s Mar-a-Lago resort in Palm Beach, Florida, according to its filing.

In the statement about the fundraising haul, Trump spokesperson Taylor Budowich said the former leader’s movement “is set to crash across the midterms and carry forward all the way through 2024.”

Democrats, who hold slim majorities in Congress, are bracing for a difficult election season as Biden’s popularity has slumped among voters worn down by the COVID-19 pandemic and its toll on the economy. 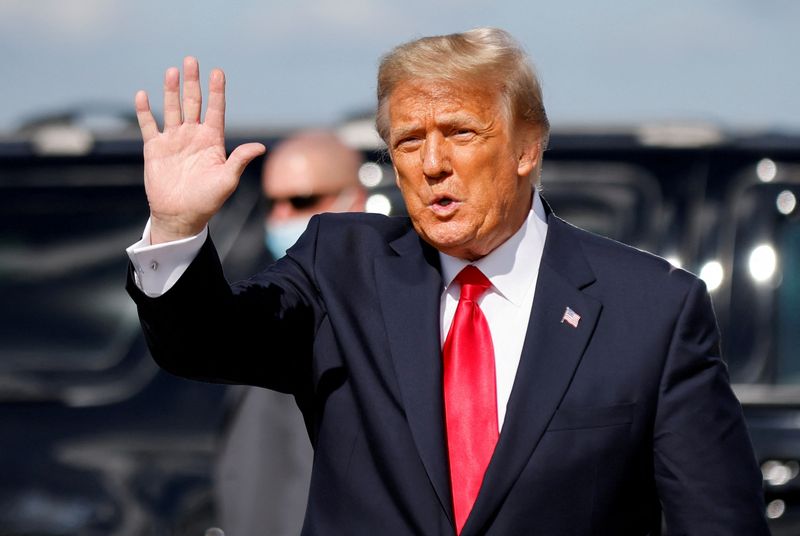