– All three Wall Street benchmarks advanced on Tuesday and the energy index closed at a multi-year high, although seesaw trading reflected investor uncertainty about how to play the current market.

Recent sessions have been choppy, as the prospect of an aggressive rate-hike campaign by the U.S. Federal Reserve looms large and investors seek to position themselves accordingly – a task not made easy by lingering pandemic influences on the economy and geopolitical tension in Europe.

But despite losing 5.3% and 3.3% in January respectively, the S&P 500 and the Dow have now recorded three straight days of gains, with the Nasdaq – which dropped 8.99% in the first month of 2022 – posting four positive sessions in the last five.

It did not look like that would happen earlier in the session, when all three benchmarks traded lower in the wake of data from the Labor Department and the ISM’s purchasing managers’ index (PMI).

“You’re starting to see that there are a lot of investors who are concerned about valuations going forward, but there are others who are worried about growth, so it seems the wall of worry keeps on growing as the economy exits this pandemic,” said Ed Moya, senior market analyst at OANDA.

“This will be the year when Fed will pull back support … the markets will not be on steroids anymore and may go through a phase of detox,” said Anu Gaggar, global investment strategist at Commonwealth Financial Network.

Geopolitical tensions added to market volatility, with Ukraine’s president signing a decree to boost his armed forces by 100,000 troops over three years, as European leaders lined up to back him in a standoff with Russia and the United States demanded immediate Russian de-escalation.

Those strong energy prices helped Exxon Mobil Corp to post its biggest quarterly profit in seven years on Tuesday. Its stock jumped 6.4% as a result, to close above the $80-per-share mark for the first time since April 2019.

As of Tuesday, 184 S&P 500 companies posted quarterly results, of which 78.8% reported earnings above analyst expectations, according to Refinitiv.

Google parent Alphabet Inc rose 1.7% ahead of quarterly results published after the bell. Amazon Inc and Meta Platforms Inc are also on deck later this week.

Of those which reported earlier on Tuesday, United Parcel Service Inc jumped 14.1% – its biggest one-day gain in 18 months – after projecting 2022 revenue above market expectations.

AT&T Inc dropped 4.2% after saying it will spin off WarnerMedia in a $43 billion transaction to merge its media properties with Discovery Inc and also cut its dividend by nearly half.

Volume on U.S. exchanges was 11.71 billion shares, compared with the 12.45 billion average for the full session over the last 20 trading days.

(This story corrects headline, first and 11th paragraphs to show energy sector index closed at a multi-year high, not a record high)

(Reporting by Bansari Mayur Kamdar and Medha Singh in Bengaluru and David French in New York; Editing by Shounak Dasgupta and Lisa Shumaker) 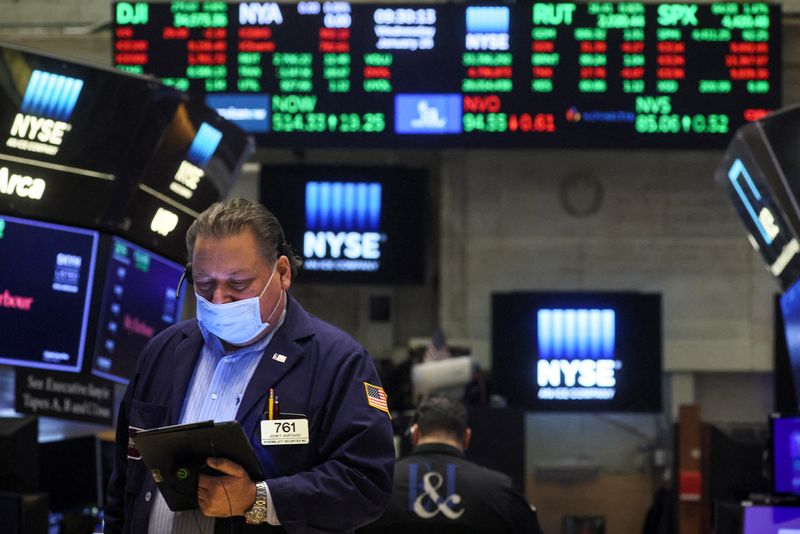