– U.S. President Joe Biden’s nominees to the Federal Reserve’s Board of Governors have completed their first official step in the confirmation process with nomination hearings before the Senate Banking Committee.

Here’s what’s next for the new leadership of the U.S. central bank as it girds for its battle with high inflation.

Jerome Powell’s four-year term as Fed chair ends this weekend. On Friday, the Fed’s board appointed him chair pro tempore, effective Saturday, so he can continue to carry out his job while the Senate considers his renomination.

The last time a Fed chief’s term expired before a Senate confirmed a new term was in 1996. The Fed’s board voted to appoint Alan Greenspan as chair pro tempore on Friday, March 1 of that year, the last business day before his term expired. The Senate confirmed his third term as Fed chair on June 20, 1996.

Powell remains in charge of monetary policy. In January, he was reelected as chair of the Federal Open Market Committee by the members of the policy-setting panel, the Fed said on Friday.

Democratic Senator Sherrod Brown, the committee’s chair, has set Feb. 15 for the committee vote on all five nominees. The panel’s membership is evenly split between Democrats and Republicans.

During the hearings at least one Republican, and in some cases more than one, indicated support for the nominations of Powell, Brainard, Jefferson and Cook, signaling those four could be “reported favorably” for confirmation consideration to the full Senate.

The outlook for Raskin, Biden’s pick for vice chair of supervision, was less clear. “She tried to convince Republicans that she would not be heavy-handed, but I don’t think she was very successful,” said Derek Tang, an economist at LH Meyer/Monetary Policy Analytics.

If the committee “fails to report favorably” on any nominee, Senate Majority Leader Chuck Schumer can have the full Senate vote on “discharging” the Senate banking panel from considering Raskin’s nomination further. A confirmation vote could be held a week or so later, once a couple other technical procedures are complete. The process was used last fall to move forward on the stalled nomination of Bureau of Consumer Financial Protection Director Rohit Chopra.

DATE TO BE ANNOUNCED: CONFIRMATION

Brown has said he has spoken to Schumer about getting the Fed nominations quickly to the Senate floor.

With the Senate split evenly between Democrats and Republicans, the Fed nominees may find their fates hinge on the vote of Senator Joe Manchin, a moderate Democrat from West Virginia. Asked earlier this week for his views, Manchin said the nominees were “extremely qualified,” but the rest of his response indicated he was referring to potential nominees to the U.S. Supreme Court, not the Fed.

Manchin has said he is concerned about inflation. Cook, Jefferson and Raskin all said they viewed fighting inflation to be the top job for the Fed. Manchin also opposes aggressive climate action, which is what Republicans say Raskin’s confirmation would mean.

One further twist: the vote may also depend on attendance.

President Donald Trump’s attempt to get his one-time economic adviser and controversial Fed nominee Judy Shelton confirmed failed in 2020 in part because a couple of Republicans were quarantining due to COVID-19 exposure and could not come to the Senate floor to vote.

Senator Ben Ray Luján, a Democrat from New Mexico, suffered a stroke last week, and his absence has already forced the postponement of several nominations. His recovery will reportedly take four to six weeks, putting off the earliest likely confirmation vote on the Fed nominees until March.

WHAT ABOUT POWELL’S UPDATE TO CONGRESS?

The Fed chief typically gives Congress a monetary policy update in February and November each year. But even if that testimony is delayed at this critical moment in U.S. monetary policy, the Fed chair pro tempore has plenty of other venues by which to get out his message. 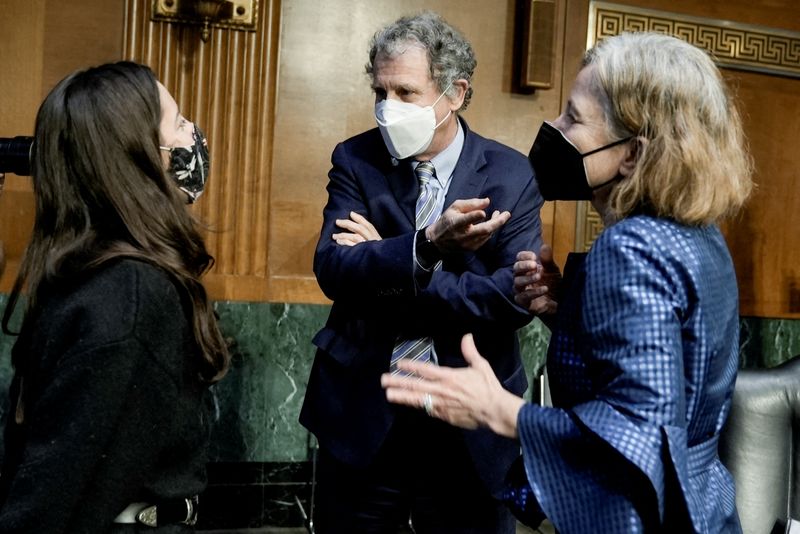