By Eva Mathews and Dawn Chmielewski

– Facebook-parent Meta Platforms Inc said on Monday that billionaire investor Peter Thiel, an early investor who has been on the company’s board since 2005, has decided to retire.

Thiel aims to spend time helping elect candidates who he believes will advance former President Donald Trump’s agenda in the U.S. midterms, the Congressional elections this year, a person familiar with the situation said.

Thiel, a co-founder of online payments system PayPal and a rare voice of conservative politics in Silicon Valley, became a Facebook investor in 2004, when he provided $500,000 in capital at a $5 million valuation for a 10% stake in the company and a seat on its board of directors.

Thiel will serve as a director until Meta’s annual shareholder meeting but will not to stand for re-election, the social media giant said.

“Peter is truly an original thinker who you can bring your hardest problems and get unique suggestions,” Chief Executive Officer Mark Zuckerberg said, thanking Thiel for his service.

The announcement comes as Meta’s shares have fallen sharply over concerns that privacy changes to Apple products was making it harder for advertisers to see how their ads work on Facebook. The stock fell 5.1% on Monday, and has lost a third of its value this year, but is still worth more than $600 billion.

Thiel left with kind words for Zuckerberg. “His talents will serve Meta well as he leads the company into a new era,” Thiel said in the statement announcing his departure from the board.

He did not respond to a request seeking further comment.

Thiel was one of Silicon Valley’s most prominent Trump supporters, speaking at the Republican National Convention in July 2016, where he hailed Trump as “a builder.” He later served as an advisor on Trump’s White House transition team.

Thiel plans in particular to help Blake Masters, a Republican candidate hoping to unseat Democratic U.S. Sen. Mark Kelly of Arizona, the person familiar with the situation said. He was also backing J.D. Vance, author of the best-selling memoir “Hillbilly Elegy” and a Republican Senate candidate in Ohio, the person said.

The billionaire has contributed $10 million each to political action committees supporting their individual candidacies, according to OpenSecrets.org, which tracks political donations.

Thiel’s backing of Trump was unusual in Silicon Valley and led to dispute with fellow Facebook director, Netflix CEO Reed Hastings. In a 2016 email to Thiel, Hastings called his support of the presidential candidate “catastrophically bad judgment” and questioned his fitness to remain on the board, according the Wall Street Journal, which reviewed the message. 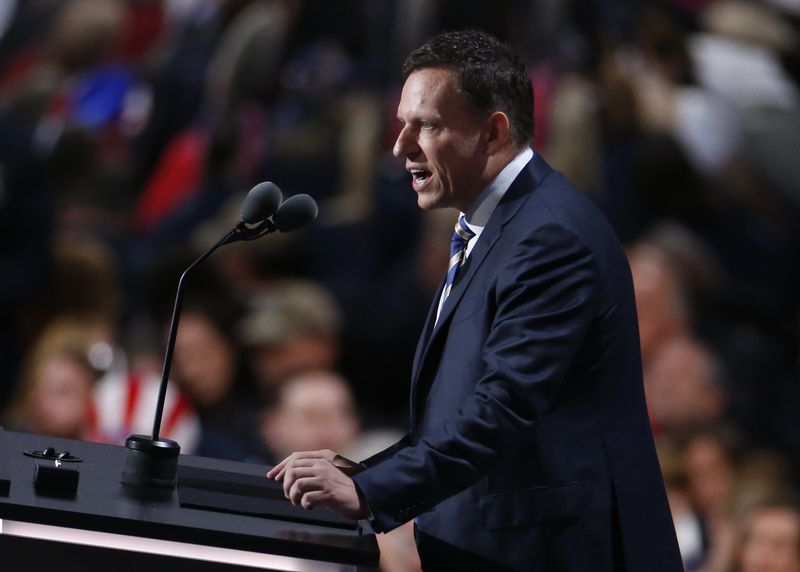