WASHINGTON -The Federal Bureau of Investigation is probing a meeting in a downtown DC garage the day before the January 6 Capitol Hill riot between the then-leader of the Proud Boys extremist group, the now-indicted leader of the Oath Keepers militia and other far-right figures, according to two witnesses interviewed by FBI agents.

Among the half dozen people gathered at a garage near the Phoenix Park Hotel was Oath Keepers head Stewart Rhodes, who was indicted this year on charges of “seditious conspiracy” in the insurrection. Proud Boys Chairman Enrique Tarrio, who was not present at the riot, was also at the garage meeting but left Washington afterward.

The meeting put the heads of the nation’s two best-known violent far-right pro-Trump groups in immediate proximity to each other 24 hours before the breach of the Capitol. Three attendees or their representatives contacted by Reuters say they did not discuss matters related to January 6.

Bianca Gracia, who heads a pro-Trump coalition called Latinos for Trump and an affiliated Political Action Committee named Latinos For America First, was at the garage meeting as well, according to witnesses and video taken by a documentary film crew. Also present was Kellye SoRelle, a lawyer for the Oath Keepers and Latinos for Trump. SoRelle told Reuters she was invited by Gracia to meet Tarrio and share information about criminal defense attorneys. She said her role in the meeting was brief, and did not concern plans for the next day.

A U.S. House of Representatives committee is investigating the January 6 riot, in which supporters of then-President Donald Trump sought to block Congress’ certification of Joe Biden’s election as president. The committee has subpoenaed the phone records of a photographer who accompanied Tarrio to parts of the garage meeting.

Tarrio told Reuters last June that his meeting at the garage with Rhodes was unplanned and not significant. “By coincidence,” Tarrio said, “he was inside … that parking garage.” He said he shook hands with Rhodes solely to be polite. “He’s here, I’m not going to not shake somebody’s hand.” He has denied any Proud Boys planning ahead of January 6.

Reached again in January, Tarrio said he would not answer further questions. “I usually speak to all reporters,” he texted back after one question, “but when they become conspiracy theorists … that’s usually when I sever ties.” Tarrio has said he stepped down as Proud Boys chairman earlier this year.

An attorney for Rhodes, who is being held pending trial, emailed Reuters that “there was no coordination” between Rhodes and Tarrio.

The FBI’s investigation of the meeting has not previously been reported, nor have the circumstances of the gathering. A short clip of the gathering appeared in a British Channel 4 documentary last year about the Proud Boys, spurring some chatter on Twitter.

Michael Simmons, who was present during part of January 6 with Rhodes, said Rhodes had not mentioned meeting Tarrio. When Reuters told him of the meeting, Simmons said he was shocked because, he said, Rhodes had been critical of Tarrio and the Proud Boys. “Why would you meet Enrique in a fucking parking garage?” said Simmons, who has not been charged. “It just blows my mind. That’s crazy!”

Federal prosecutors have charged multiple leaders of the Proud Boys and Oath Keepers with playing leading roles in the mayhem of January 6. Tarrio has not been indicted in the case.

Last March, prosecutors cited the social media messages of one Oath Keeper leader indicted in the January 6 case. “This week I organized an alliance between Oath Keepers, Florida 3%ers, and Proud Boys,” he allegedly wrote in a Facebook message before the riot, citing a different gathering, prosecutors said in a court filing. The Three Percenters is a loosely organized far right militia, some of whose members have been charged in the Capitol attack.

So far, however, the Justice Department has not disclosed clear evidence that the far-right groups plotted to come together on January 6.

On the afternoon of January 5, 2021, Washington teemed with Trump supporters preparing for January 6, when Congress was scheduled to ratify Biden’s presidential victory at the Capitol. Tarrio had just been released after a night in a Washington jail, where he was held on charges of burning a Black Lives Matter flag in December 2020. A judge ordered him to leave town until his court appearances. Tarrio later served nearly six months for burning the banner and carrying illegal rifle magazines into the city that December.

After he was released on January 5, the documentary film crew working on the Proud Boys report drove Tarrio to the Phoenix Park Hotel, not far from the Capitol building, said a source familiar with the matter.

Oath Keepers leader Rhodes had left Texas on January 3, spending over $10,000 on firearms equipment on his journey to the DC area, prosecutors say in an indictment unsealed January 4. The indictment said he conspired “to oppose by force the lawful transfer of presidential power.” He stayed at a hotel in Vienna, Virginia.

Just as Tarrio arrived from jail January 5, Rhodes was outside the Phoenix Park Hotel in DC, said a source at the scene.

Sorelle said her recollection was that Tarrio and a couple of others were in the garage when she walked in with Rhodes and Gracia. She said Rhodes shook Tarrio’s hand and the two exchanged pleasantries. Then she briefly discussed Tarrio’s need for a lawyer in the DC criminal case, for which he’d been arrested the previous day. She said about six people were there. Latinos for Trump has not been accused in the January 6 violence.

Contacted this January, Gracia declined to discuss the garage meeting. Previously, she told Reuters her group had a morning rally on January 6 near the U.S. Senate, and that she left by 12:15 PM, went to her hotel and slept through the insurrection. “We’re a very spiritual group and we’re grounded in God and we stayed where we were supposed to stay and we prayed,” she said. SoRelle says she too went to the morning January 6 rally by Latinos for Trump, where she spoke, as did Rhodes, SoRelle and Simmons said.

The photographer, Amy Harris, was also with Tarrio at the garage meeting January 5, two sources said. Harris, who originally specialized in photography of music concerts and festivals, had shifted to protests in 2020, and had begun focusing on Tarrio and the Proud Boys. The House committee has subpoenaed Harris’s phone records; she is suing the January 6 committee to block the subpoena. “Harris’s work documenting Tarrio throughout the remainder of 2020 earned her Tarrio’s trust as a journalist and, accordingly, the trust of the members of his group,” her suit said.

The documentary film crew was from a company called “Saboteur Media.” It gathered a snippet showing Tarrio, Rhodes and Gracia standing in the garage but does not have audio, according to a source familiar with it. Reuters has seen a photo of the participants standing together at the garage.

The FBI has obtained a copy of the footage, a source told Reuters. 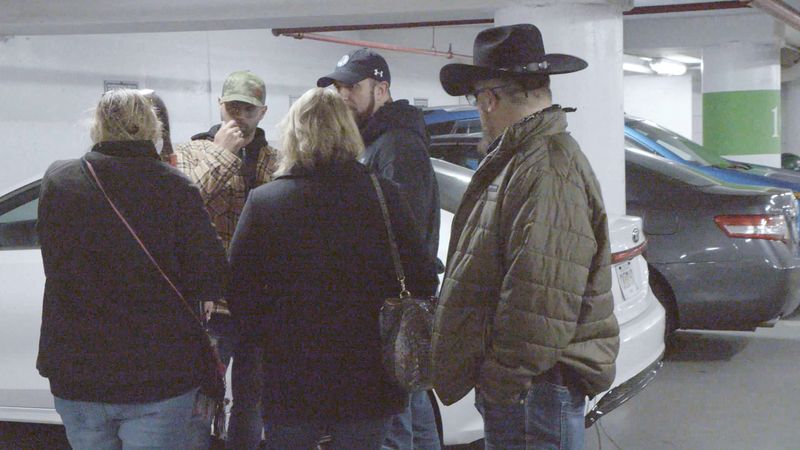 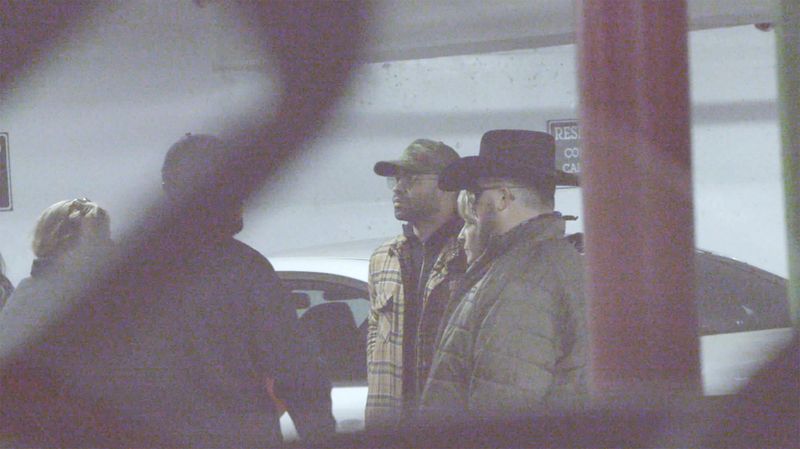 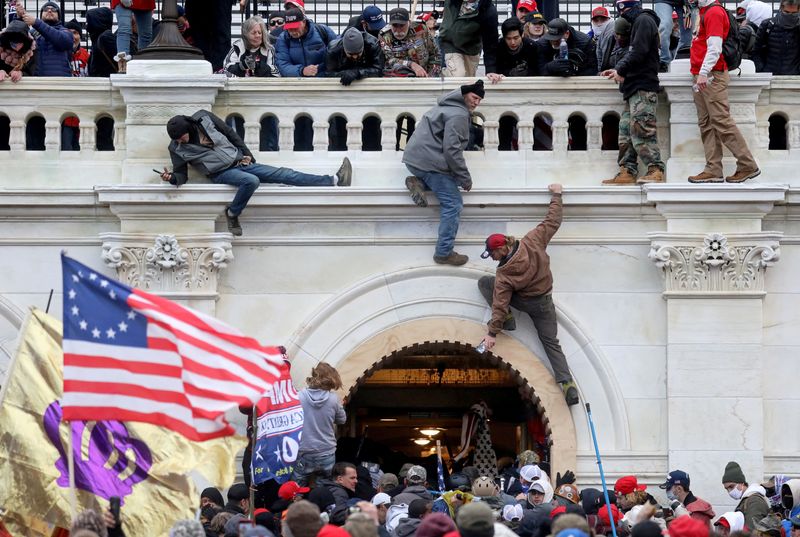 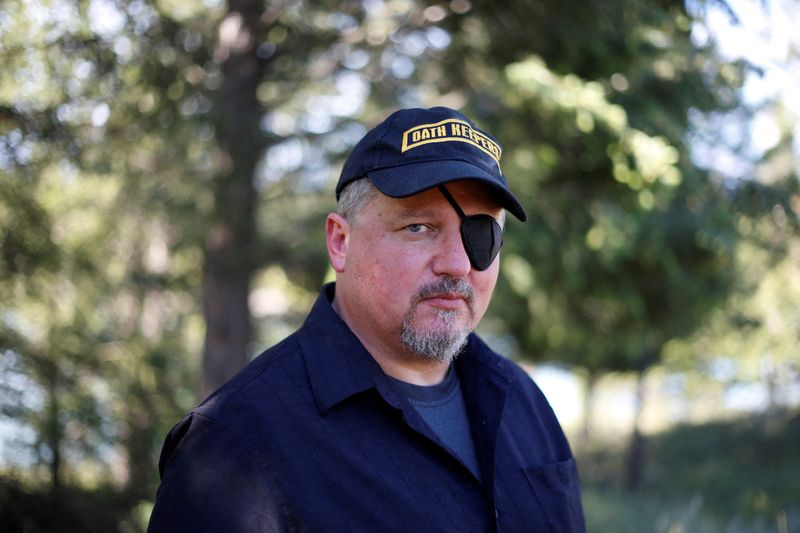 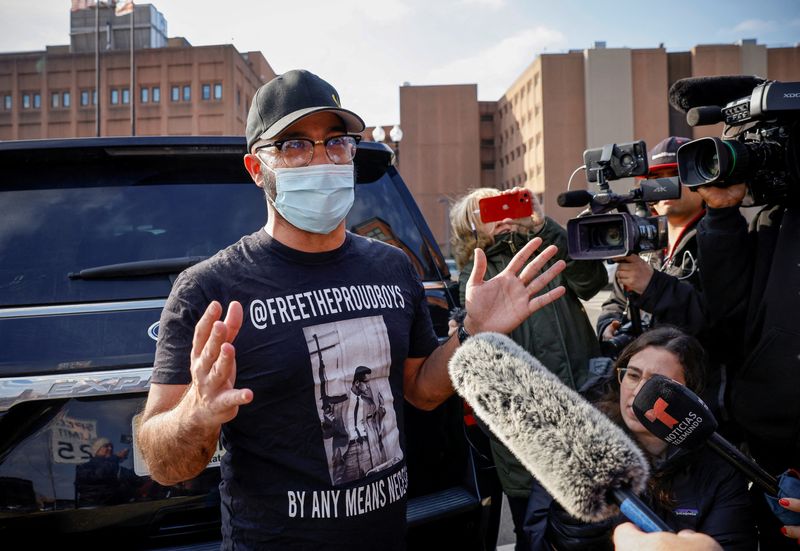