WASHINGTON – The White House on Monday released a highly anticipated report from its labor task force that highlights low union participation in the U.S. government, and includes nearly 70 recommendations on how the government can help workers join labor unions and bargain collectively.

More than 300,000 employees in the federal government, the country’s largest employer, are eligible to join a union but have not, the report said.

The government will offer unions seeking to build membership greater access to federal employees, the reports says, and push agencies such as the National Labor Relations Board and the Federal Labor Relations Authority to coordinate on worker organizing.

The 43-page report also asks the Labor Department to ensure that workers who face retaliation when engaged in organizing receive full protection. And it aims to prevent the misclassification of workers as independent contractors – part of a long-running battle for the Labor Department with companies that rely on so-called “gig economy” workers.

President Joe Biden established the task force in April with the goal of reversing a decades-long decline in union membership. He appointed Vice President Kamala Harris as the chair of the task force and Labor Secretary Marty Walsh as vice chair of the group, which also includes over 20 heads of agencies and Cabinet officials.

Union support was important to Biden’s victory in several Rust Belt states in the Midwest and Northeast in 2020, and those voters’ choices in 2022 will play a key role in the midterm congressional and gubernatorial elections.

“This report is going to do some good things for workers in America,” Labor Secretary Walsh told Reuters in an interview.


Harris and Walsh, who held more than two dozen meetings with stakeholders around the country, met with Biden on Friday to discuss the report, a source with knowledge of the matter said, speaking on condition of anonymity.

During the meeting, Walsh said, Biden and Harris were focused on “what’s the follow-up going to be, so it’s not just the paper documents.” They discussed “coming up with a system” that helps report progress, he said.

The task force will submit a second report in six months, which will describe progress in implementation, he said.

Liz Shuler, president of the AFL-CIO, the country’s largest labor federation, comprising 57 affiliated unions and 12.5 million workers, told Reuters the U.S. labor movement will “be the eyes and ears on the ground,” making sure the report gets implemented.

“I think this could be a game changer, to have the power of the federal government examining itself and how its practices can be utilized to advance worker organizing,” she said.

Biden’s administration may be the most overtly pro-labor since Harry Truman left the Oval Office nearly 70 years ago, labor leaders and outside analysts have said, citing actions that have put unions “at the center of policy.

Biden has rarely missed a chance to highlight his interest in bolstering the U.S. labor movement, including through a slew of provisions in his legislative initiatives.

The White House report does not state how much union membership has risen since Biden took office a little over a year ago but says the pandemic has boosted union approval. Sixty-eight percent of Americans currently approve of labor unions — the highest level since 1965.

Unions have lobbied for passage of the Protecting the Right to Organize Act, or PRO Act, which would prohibit employers from holding mandatory anti-union meetings and impose financial penalties for violating workers’ labor rights. The U.S. House of Representatives passed the measure in March and Biden supports the legislation, but it faces long odds in the Senate.


“It is important to acknowledge that the task force recommendations do not and cannot take the place of the robust legislative change that is needed to fix our labor laws,” the report said.

(Reporting by Nandita Bose in Washington; Editing by Stephen Coates and Heather Timmons) 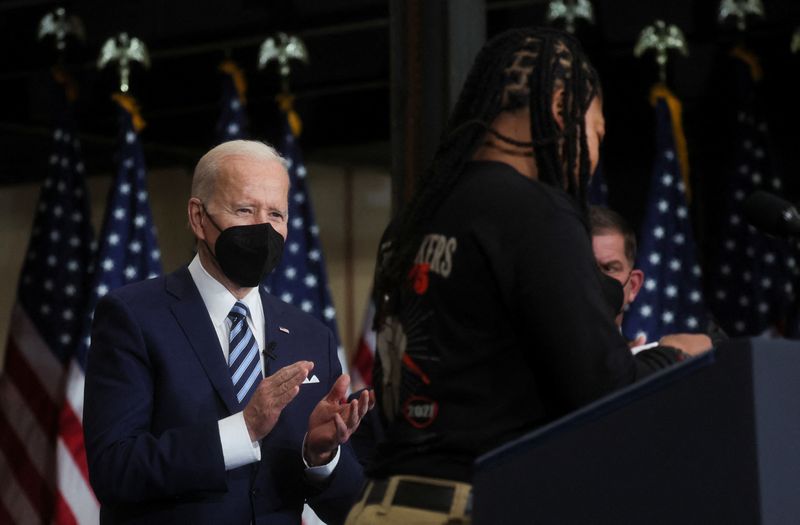