By Kenneth Li and Nick Zieminski

NEW YORK -Thomson Reuters Corp missed fourth-quarter earnings forecasts on Tuesday as the news and data provider stepped up investments it said would help deliver stronger-than-expected revenue growth this year and next.

The parent company of Reuters News reported adjusted earnings fell to 43 cents per share from 54 cents a year earlier. That was 3 cents below Wall Street expectations, according to data from Refinitiv.

Edward Jones analyst Matt Arnold called it a “mixed quarter,” with better than expected revenue offset by weaker profits. The Toronto-based company is well placed to grow earnings given stable demand for its products, but the shares already reflect those positives, he said in a note to clients.

The stock was down 3.5% in early New York and Toronto trading.

Thomson Reuters, which owns the Westlaw legal database and the Checkpoint tax and accounting service, said it invested $25 million in the quarter on additional sales and marketing resources, product development and data analytics.

Chief Executive Steve Hasker said the company was in a strong position to tap into trends emerging in the economic recovery from the COVID-19 pandemic.

“Customers (are) increasingly realizing the value of our content and tools in a hybrid working world that’s affected by accelerating complexity,” he said in an email to staff.

Total revenues rose 6% in the quarter to $1.71 billion, ahead of analyst expectations, according to estimates from Refinitiv.

While information services stocks continue to show resilient growth, they have lagged the broader market in 2022 as investors have switched to companies with more scope for recovery in profits as the pandemic abates, Edward Jones’ Arnold said.

Thomson Reuters’ U.S.-listed shares are down about 16% this year versus a 4% drop for the S&P 500. The company’s peers include RELX Group’s LexisNexis, Bloomberg LP, News Corp’s DowJones, and Wolters Kluwer NV.

Thomson Reuters is mid-way through a two-year $600 million investment into a “Change Program” to transform itself from a holding company of different businesses to a more focused, content-driven technology company.

“We’ll continue to look at acquisitions to supplement our existing assets to help drive organic growth in 2022 and 2023,” Chief Financial Officer Michael Eastwood told Reuters in an interview, adding the company potentially had “billions” available for deals.

The three main divisions – Legal Professionals, Tax & Accounting Professionals, and Corporates – reported quarterly sales up between 5% and 9%, but only the tax segment saw higher adjusted earnings before interest and other items (EBITDA).

The Reuters News division showed double-digit increases in both sales and adjusted EBITDA.

Thomson Reuters swung to a diluted loss per share of 36 cents in the quarter and posted a 73% drop in operating profit to $257 million, due to higher costs and a boost in the year earlier period from the sale of an investment.

The company also said it had to pay $80 million to UK tax authorities by March, but that it was disputing the demand. It gave no further details.

Reuters News makes more than half its revenue from supplying news to Refinitiv, a data company spun off from Thomson Reuters and now owned by the London Stock Exchange (LSE). Thomson Reuters holds a minority stake in the LSE following the deal, worth about $7 billion as of Monday, the company said.

(Writing by Nick Zieminski in New YorkEditing by Mark Potter) 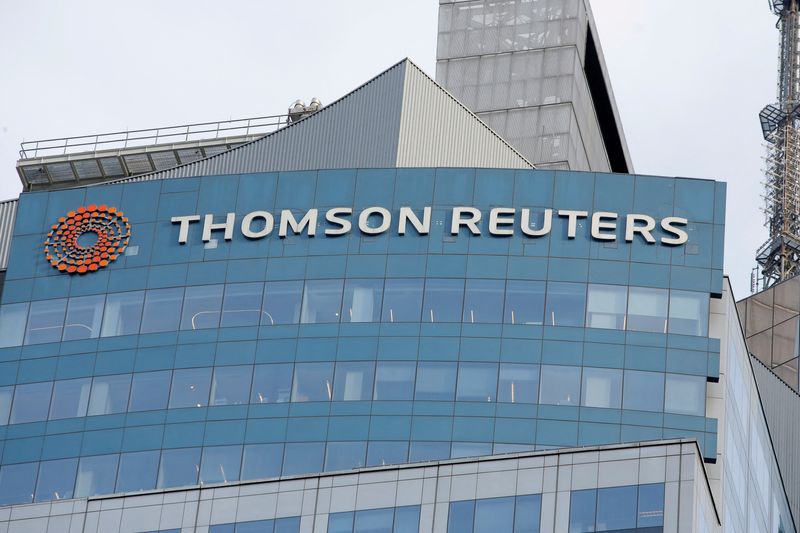