– Wall Street ended sharply higher on Tuesday, lifted by Apple and Microsoft, while a jump in Treasury yields elevated bank stocks ahead of a key inflation reading this week.

The benchmark S&P 500 and the tech-heavy Nasdaq reversed early losses and gained in the latter part of the session, with Amazon.com Inc gaining 2.2%, and Apple and Microsoft both rising over 1%.

Shares of Bank of America Corp, JPMorgan Chase & Co and Wells Fargo all gained over 1%.

The S&P 500 energy sector index sank 2.1% as investors worried the resumption of indirect talks between the United States and Iran could revive an international nuclear agreement and allow more oil exports from the OPEC producer.

“Today’s gain is probably due to some of the Macron headlines, but it’s also just recognition of the fact that the economy is in pretty good shape, and we probably overdid it a little to the downside,” Ladner said.

With Tuesday’s rise, the S&P 500 remains down about 5% so far this year, while the Nasdaq has lost about 9%.

U.S. consumer prices data, set to be released on Thursday, is forecast at a four-decade high of 7.3%. The numbers follow strong U.S. labor data last week that added to investor concerns that the Fed will tighten rates faster than thought.

Concerns around aggressive policy tightening by the U.S. central bank, geopolitical tensions in Ukraine and mixed results from Big Tech have weighed on the major U.S. indexes since the start of the year.

Earnings were mixed on Tuesday, with Pfizer Inc down after the drugmaker’s full-year sales forecast for its COVID-19 vaccine and antiviral pills fell short of estimates.

Amgen Inc surged nearly 8% after the company announced a buyback of up to $6 billion and forecast earnings would more than double by 2030.

Facebook-owner Meta Platforms fell 2.1% after billionaire investor Peter Thiel decided to step down from the company’s board, driving a fourth day of losses in the stock after its bleak forecast last week wiped out billions of dollars in market value.

Peloton Interactive Inc soared 25%, despite slashing its revenue forecast as the exercise bike maker said it would replace its chief executive and cut jobs in a bid to revive sagging sales.

Coty Inc jumped 8% after the cosmetics seller raised its earnings forecast for 2022.

Advancing issues outnumbered declining ones on the NYSE by a 1.58-to-1 ratio; on Nasdaq, a 1.71-to-1 ratio favored advancers.

Volume on U.S. exchanges was 10.3 billion shares, compared with a 12.3 billion average over the last 20 trading days.

(Reporting by Bansari Mayur Kamdar in Bengaluru and by Noel Randewich in Oakland, Calif.; Editing by Maju Samuel and David Gregorio) 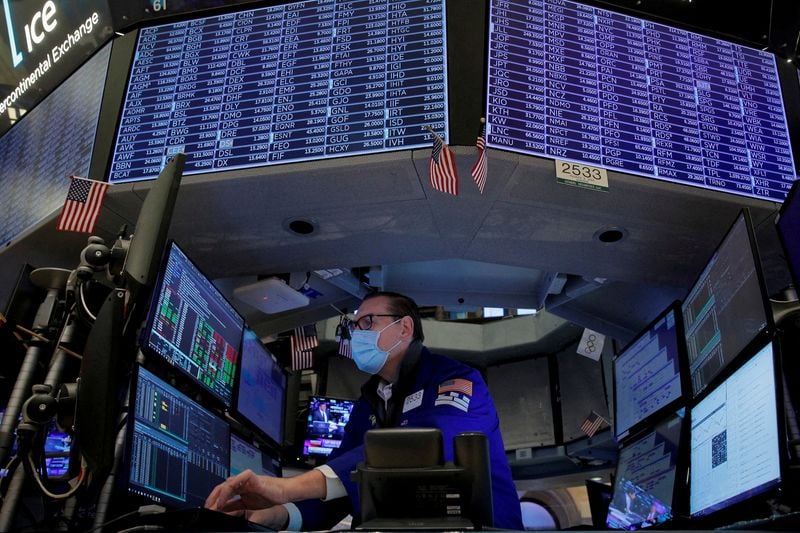