LUHANSK REGION, Ukraine – A group of Ukrainian soldiers patrols the frontline in eastern Ukraine when they suddenly hear the noise of grenades going off in the distance. They crouch down and start running towards the safety of the trenches.

This is the contact line of Ukraine’s eight-year war against Russian-backed forces that President Volodymyr Zelenskiy says has claimed 15,000 lives.

Russia has massed more than 100,000 troops near Ukraine’s borders in recent weeks, ringing alarm bells in NATO member states who fear a new military offensive. Moscow denies any such plan.

The soldiers in the Luhansk region, which shares much of its border with Russia, say they are fed up with uncertainty and want some kind of breakthrough in the conflict that has kept them in the trenches since 2014.

“We are sick of this never-ending war. Make it or break it, let them attack us or we should attack them to end this uncertainty. We are all tired of this,” said Bohdan, a Ukrainian soldier who refused to give his surname for security reasons.

Bohdan, 27,  a former miner and a student of aviation engineering in Pavlohrad, near Dnipro, has been stationed on the frontline for the past year.

Although the bigger guns have been silent for some time, mortar and rocket-propelled grenade explosions still break the silence over the snow-covered fields.

Soldiers are doing what they can to cope with tension and fight boredom.

Bohdan spends time exercising with barbells and a skipping rope in a makeshift gym he has built in the trench that he has been posted at for the past several months.

Another soldier, Konstyantin, 44, a former policeman from Lviv in active service since 2014, says training will be crucial if full-scale conflict breaks out.

“If something starts it is impossible to predict what’s going to happen and to plan accordingly. One will have to rely on one’s skills, habits and experience,” he said. 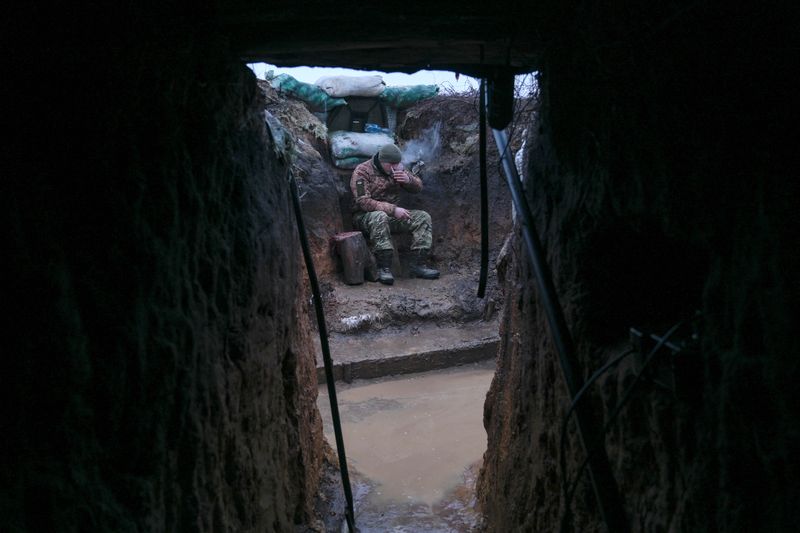