SYDNEY – A day after Australia’s Prime Minister Scott Morrison apologised in parliament for the treatment of women who had suffered sexual abuse there, a prominent campaigner said she wanted to see action more than words.

Former political staffer Brittany Higgins, who says she was raped in a parliament office by a fellow staffer, said she was concerned workplace sexual abuse was in danger of becoming a “political perception problem neutralised and turned into a net positive”.

“Actions are what matter,” Higgins said in a speech at the National Press Club in Canberra. “Task forces are great. Codes of conduct are important. But only if it’s paired with institutional change.”

The apology by Morrison, who must hold an election by mid-May, came after he struggled last year to placate public anger amid several allegations of sexual abuse, discrimination against women and misconduct in parliament.

A review sparked by Higgins going public with details of her alleged sexual assault in a ministerial office found half of parliamentary staff had experienced harassment, bullying or sexual assault.

As parliament sat for the first time in 2022 on Tuesday, the speaker read a statement apologising for “an unacceptable history of workplace bullying, sexual harassment and sexual assault in parliamentary workplaces”.

In his address to the parliament, Morrison apologised to all who had suffered, and directly to Higgins for what happened to her.

Higgins said on Wednesday she recognised the significance of the moment but was concerned the government had only learnt how to be better at talking about the issue.

Last year, police charged a 26-year-old man after an investigation into Higgins’ case. He is due to face court later this year.

The parliamentary apology marked a rocky start to an election year for Morrison as anti-vaccination protesters gathered outside parliament and his conservative party faced ructions over a religious freedom bill.

His personal integrity has also come under attack from damaging leaks, including by Higgins, of historical text messages from state and Coalition partner leaders, including some labelling him a “liar”.

Higgins spoke at the press club alongside another prominent campaigner for the rights of abuse victims, former Australian of the Year Grace Tame.

Tame was asked how opposition Labor leader Anthony Albanese could do better on the issue of workplace abuse if elected.

“All that Anthony would have to do is none of the things Scott’s done,” Tame said. 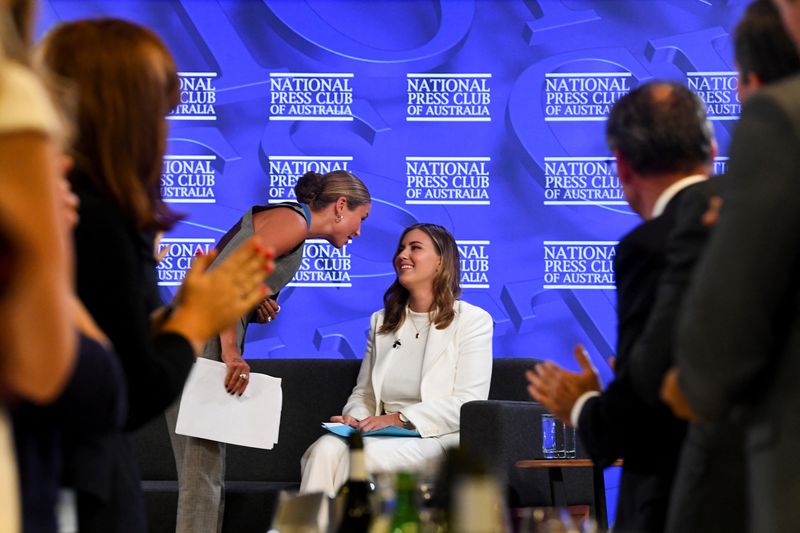