OTTAWA – Sleeping in trucks and staying warm at fire pits and portable saunas, protesters camped out in the frigid Canadian capital of Ottawa are digging in for a long stay, convinced they have momentum and right on their side.

The number of protesters in the “Freedom Convoy” – initially an opposition to vaccine mandates for cross-border drivers that has morphed into a wider protest against COVID restrictions and the Canadian government – has thinned since it arrived in Ottawa 13 days ago.

“We want freedom for our kids,” said Jean-Pierre Lapointe, who came from Quebec with his small children, their strollers strung with small Canadian flags. His daughter had a cardboard sign around her neck: “My future is in your hands.”

He said they would stay “until we get out freedom back. … I want all the mandates to end.”

Several protesters told Reuters they had lost jobs or had trouble finding work because they were not vaccinated. Others cited objections to government policy beyond the vaccine mandates such as a federal carbon tax and housing unaffordability. Virtually all of them spoke about losing their right to autonomy.

Trucks and other vehicles in the area were emblazoned with variations on “FREEDOM” and exhortations against vaccine mandates, lockdowns and other measures. Some protesters wore Canadian flags as capes or baseball caps reading “Make Canada Great Again,” a play on former U.S. President Donald Trump’s slogan.

The protest, congregated around the Canadian Parliament and central bank, has shut down the city’s downtown core and frayed residents’ nerves due to blaring trunk horns. A court granted an injunction against using horns on Monda https://www.reuters.com/world/americas/canada-police-seen-getting-tough-trucker-protests-continue-2022-02-07y, but police have been unable to shift the protesters, some of whom are demanding the resignation of Prime Minister Justin Trudeau.

Clustered around metal drum fire pits, protesters traded debunked talking points on how Trudeau profited from buying vaccine patents or from contracts that went to a private company charged with administering COVID-19 tests.

A well-organized supply chain has kept the protesters stocked with fuel, food and everything from diapers to bouncy castles for children. Open-sided tents piled high with food and water fed the protesters, who were largely peaceful. The group has raised millions in funding, some of which came from U.S. supporters, Canadian police said.

About a quarter of the 418 protest trucks have children in them, Ottawa Deputy Police Chief Steve Bell said. Citing concern for their welfare in relation to cold, noise, carbon monoxide risks and access to sanitation, police are in touch with child welfare authorities, Bell said.

“We’re not at the stage where we’re looking to do any sort of enforcement activity around that,” he said.

Police have made 23 arrests, issued about 1,300 tickets issued and have 79 criminal investigations open as of Tuesday.

“I’m a very wealthy man,” said Kenny McKean, a domestic trucker from Huntsville, Ontario, who said his fuel costs are running at C$200 a day. “I can stay to the end.”

(This story corrects length of protest to 13 days, not 12, in second paragraph) 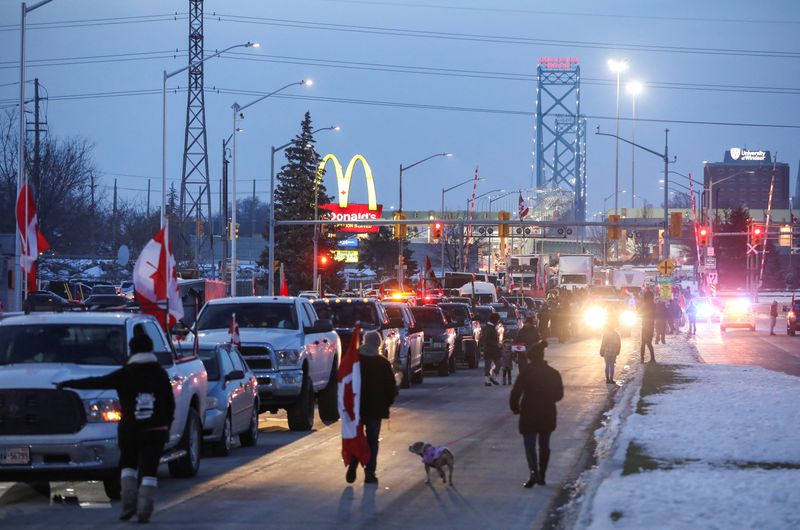