MOSCOW – Russia launches the active phase of vast military exercises in Belarus on Thursday, a display of strength that shows how Moscow’s tightening grip on Minsk has given it enhanced capabilities in its standoff with the West over Ukraine.

The joint Allied Resolve drills that NATO has described as Russia’s biggest deployment to ex-Soviet Belarus since the Cold War run until Feb. 20 and are part of a Russian troop buildup near Ukraine that has stirred fears of a looming invasion.

Russia, which denies any invasion plans, has not disclosed how many troops will be involved. Many of the troops have been deployed from thousands of miles away in Russia’s Eastern Military District in the far east.

In military terms, the deployments create a new front for Ukraine to worry about and stretch Kyiv’s forces thinner around its long defensive perimeter, said Neil Melvin, director of International Security Studies at the RUSI think-tank in London.

The deployments to the north of Ukraine put Russian troops much closer to Ukraine’s capital Kyiv, which lies just over 90 km (56 miles) from the border at its closest point.

With the deployment of fighters and air defence systems, Russia has much more effective defensive cover for its Kaliningrad exclave in Europe, and electronic jamming systems in Belarus make Western intelligence gathering harder, said Melvin.

“(This) puts forces in play on NATO’s eastern flank that will discourage or prevent NATO having any kind of role,” he said.

For years, Belarusian leader Alexander Lukashenko, a wily political operator in power since 1994, played off East against West for political gain and resisted the idea of hosting a permanent Russian military base.

But since Russian President Vladimir Putin shored him up with political and economic support to help him weather huge opposition protests in 2020 he has shed much of that veneer of autonomy, analysts said.

“I think he finally decided that in order to stay in power he should rely on his strategic alliance with Moscow and of course these joint military exercises are yet another kind of manifestation of this new closeness,” said Andrey Kortunov, head of the Russian International Affairs Council which is close to the Foreign Ministry in Moscow.

“Now he has full backing from Putin in exchange for his loyalty. Apparently both sides are happy with this deal, at least for the time being,” he said.

“This is basic code for a permanent presence,” said Mathieu Boulegue, a research fellow at London’s Chatham House think-tank. “You can call it what you want: whatever the rhetoric around it, it’s going to turn into an informal permanent presence that Russia has always wanted.”

On Feb. 27, Belarus is expected to hold a referendum to change its constitution. Changes would include removing its formal status as a “neutral” country and a “nuclear-free” zone.

The Kremlin has said the Russian troops will return to their permanent garrisons once the drills are over.

But the beleaguered Belarusian opposition-in-exile, which has fretted for years that Lukashenko is trading off chunks of sovereignty in return for backing from Moscow, fears Russia’s troops may not leave entirely.

“Lukashenko has opened Pandora’s Box. He thinks he’s still in control, but we’re not sure. Is he able to make sure these troops are going home, or not?” said Franak Viacorka, an adviser to Belarusian opposition leader Sviatlana Tsikhanouskaya. 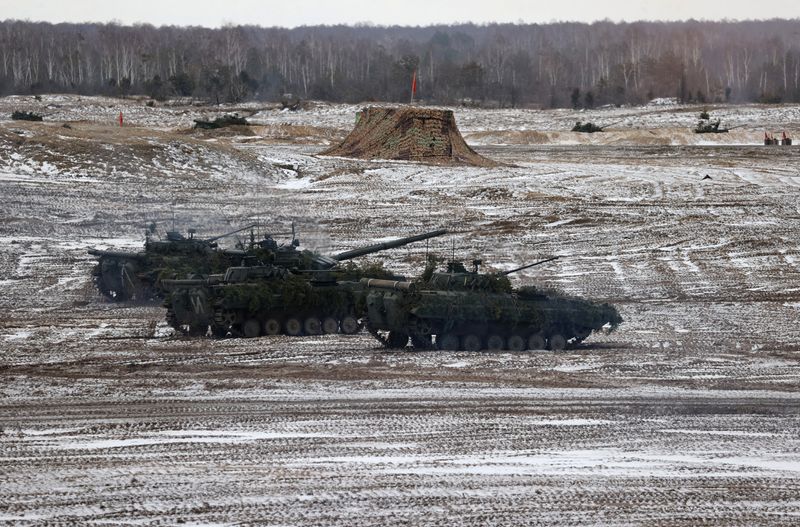