Increasing costs for freight and ingredients such as wheat, corn and edible oils due to global supply chain snarls have significantly hurt packaged food companies, leaving them with little choice but to hike prices.

Kellogg said the nearly three-month strike that started in October at its U.S. cereal plants hit margins in the fourth quarter, as it hired temporary workers at higher wages, and would affect sales in the first half this year.

A small fire also occurred at one of the plants in early December.

“After our supply was further disrupted by the fire and strike, we are recovering production, inventory and service levels and commercial programs in that (U.S. cereal) business”, Chief Executive Officer Steven Cahillane said on a call with analysts.

Kellogg, however, expects adjusted full-year profit per share to grow by 1% to 2% on a currency-neutral basis thanks to increased prices for its breakfast cereals and snacks such as Pop-Tarts and Pringles. Analysts on average expected a 0.1% rise, according to Refintiv IBES data.

The company said its forecast accounted for further inflationary pressures and the impact of the workers’ strike.

Shares of the Michigan-based company rose about 3.5% in morning trading.

Adjusted gross margin for the fourth quarter fell to 30.2% from 34.2% a year earlier, while net income attributable to Kellogg more than doubled to $433 million, or $1.26 per share.

Net sales fell to $3.42 billion in the quarter but beat the consensus estimate of $3.39 billion.

(Reporting by Mehr Bedi in Bengaluru; Editing by Ramakrishnan M.) 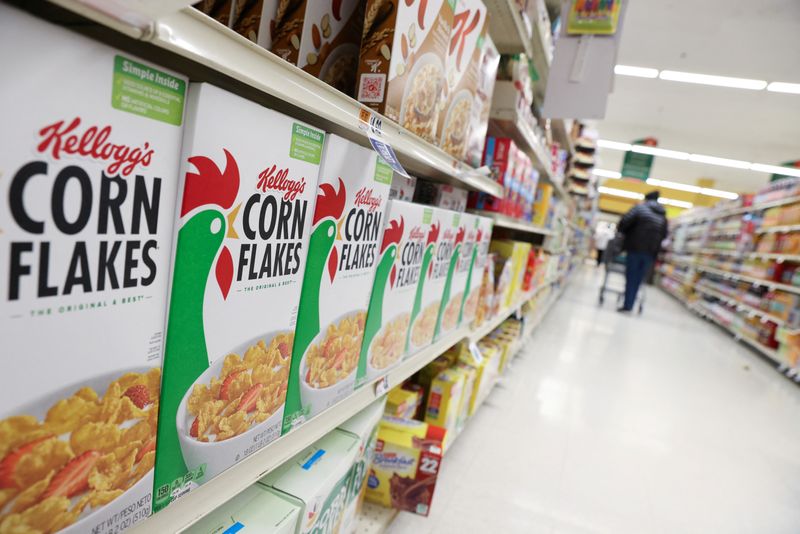