By Richa Naidu and Ross Kerber

LONDON/BOSTON – The board of Ben & Jerry’s aims to work out a “new arrangement” for sales in Israel before the end of the year, Unilever PLC’s CEO said on Thursday, after the U.S.-based independent ice cream brand last year committed to halting sales in Israeli-occupied Palestinian territories.

“Our absolute focus right now is to figure out what the new arrangement will be for Ben & Jerry’s,” CEO Alan Jope said on a conference call with journalists after the company announced earnings.

Jope’s comments were the most specific he has given about the actions of the ice cream brand, based in the state of Vermont. Ben & Jerry’s said in July that it would halt sales in Israeli-occupied Palestinian territories, a protest against Israeli settlements that has sparked some backlash including divestments by U.S. pension funds.

Jope did not directly criticize the sales limit but said, “On subjects where Unilever brands don’t have the expertise or credibility, we think its best that they stay out of the debate.”

“Ben & Jerry’s is a great brand – most of the time they get it right – they have a great track record of campaigning on important issues that are relevant to their consumers,” Jope added.

Investors are watching the ice cream controversy as a test of Jope’s ability to balance his emphasis on marketing tied to social issues with financial results.

Speaking before Jope’s remarks, Kevin Dreyer, a portfolio manager at Gabelli Funds, whose parent GAMCO owns about 225,000 Unilever shares, said that while many Unilever consumers like its green-labeled products, some political activism by Unilever’s brands could alienate some consumers.

Jope has previously said Ben & Jerry’s board acted independently and that Unilever does not support efforts to isolate Israeli, where it employs nearly 2,000 people. Ben & Jerry’s had said it would continue to sell ice cream in Israel “through a different arrangement.”

Ben & Jerry’s accounts for about 3% of the world’s ice cream market. The brand’s sales grew 9% last year, Unilever said, outpacing overall underlying sales growth of 4.5%. The company did not give further details on sales.

“I definitely would not make a connection between those (Ben & Jerry’s) statements and its sales growth,” Jope said on the call.

“The growth that we’re seeing on Ben & Jerry’s is driven much more by their innovation programme,” Jope added.

(Reporting by Richa Naidu in London and by Ross Kerber in Boston; Editing by Will Dunham) 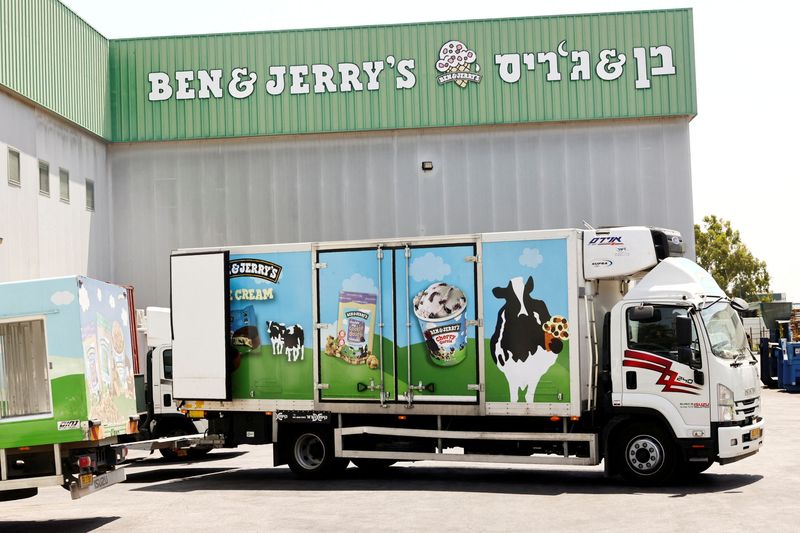