By Jonathan Stempel and Jody Godoy

NEW YORK – Sarah Palin’s defamation case against the New York Times is heading to a jury, after her lawyer accused the newspaper of falsely associating her in a 2017 editorial with a mass murder, a link that a Times lawyer said was an honest mistake.

In his closing argument in federal court in Manhattan, Palin’s lawyer Kenneth Turkel said the Times and its former editorial page editor, James Bennet, turned a “blind eye” to the facts as it smeared the reputation of Palin, a former Alaska governor and 2008 Republican U.S. vice presidential candidate.

“The Times resurrected a horrific, false accusation (that) in its simplest form accused Governor Palin of inciting the murder of six people,” he said. “She’s got thick skin. This one crossed the line.”

In response, Times lawyer David Axelrod said the editorial was an “honest mistake” and not meant as a “political hit piece” and that Palin offered no evidence it harmed her reputation, citing her continued public appearances after it was published.

“The criticism was of the New York Times for messing something up,” Axelrod said. “You saw no evidence that anyone criticized Governor Palin for what was written in the editorial. None, zip, zilch.”

He also urged jurors to consider the need for a robust press to cover news and express opinion, citing protections afforded by the First Amendment to the U.S. Constitution.

“The First Amendment is so important that honest mistakes do not create liability,” he said. “The evidence does not support branding him (Bennet) with a scarlet ‘D’ for defamation for the rest of his life.”

The trial is in its seventh day, and is being closely watched by First Amendment advocates.

Palin, 58, has said she may use the case to challenge longstanding protections for U.S. news media against defamation claims by public figures.

Jurors must decide whether Palin proved with clear and convincing evidence that the Times and Bennet acted with “actual malice,” https://www.reuters.com/article/uk-new-york-times-palin-idUKKBN25O31B meaning they knew the editorial was false or had reckless disregard for the truth.

The “actual malice” standard came from New York Times v. Sullivan, a landmark 1964 U.S. Supreme Court decision. Palin has signaled she will challenge that standard on appeal if she lost.

It incorrectly linked Palin to the January 2011 shooting https://www.reuters.com/article/us-usa-shooting-congresswoman-factbox/factbox-congresswoman-gabrielle-giffords-shot-idUSTRE70723F20110108 in a Tucson, Arizona, parking lot where six people were killed and then-Democratic U.S. Representative Gabby Giffords was seriously wounded.

The editorial was written after a shooting at a congressional baseball practice in Alexandria, Virginia, where Republican U.S. Representative Steve Scalise was among the wounded https://www.reuters.com/article/us-virginia-shooting/scalise-in-critical-condition-after-attack-by-gunman-at-baseball-field-idUSKBN1951M1.

Bennet inserted language that drew an incorrect connection between the Giffords shooting and a map circulated by Palin’s political action committee that the editorial said placed 20 Democrats, including Giffords, under crosshairs.

“The link to political incitement was clear,” the editorial said. It was corrected the following morning, and Bennet testified during the trial that he never intended to blame Palin or her political action committee.

In her own testimony, Palin spoke about being a mother and grandmother still living in her Wasilla, Alaska, hometown, likening herself to the biblical underdog David against the Times’ Goliath.

She said the editorial left her feeling “powerless” and “mortified,” upset her sleep, and caused people to think less of her.

But while Palin’s public profile has long been lower than in 2008, she failed to offer specific examples of how the editorial hurt her reputation or caused her harm.

Turkel said none of that excused the Times. 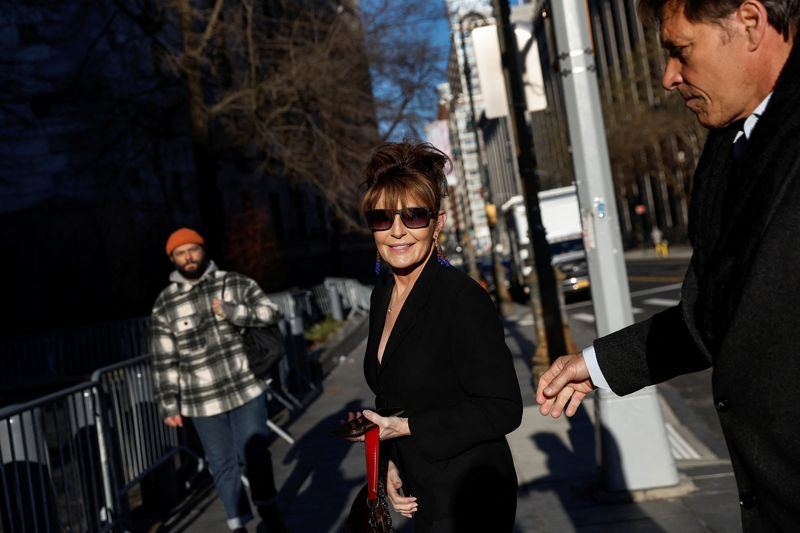