CHICAGO -A variety of U.S.-based groups are organizing convoys of trucks and other vehicles for this weekend and early next month, emulating the protests against COVID-19 mandates that have roiled Canada https://www.reuters.com/world/americas/canada-protests-enter-third-week-sophisticated-demonstrators-dig-2022-02-11 and disrupted North American supply lines.

An organization dubbed “Convoy to Save America” said on its website that two separate vehicle convoys will converge this weekend at the Peace Bridge, a U.S.-Canadian border crossing in Buffalo, New York. One of the convoys will leave New York City on Friday and the second from Mount Juliet, Tennessee, on Saturday.

Pennie Fay, one of the group’s founders, told Reuters that the convoys will consist of sports utility vehicles and minivans filled with supplies such as water, food, gas cards and blankets for Canadian truck drivers who arrive on the U.S. side.

“This weekend is about the Canadians, about supporting them,” said Fay, who is leaving from Nashville, “while at the same time bringing attention to the fact that we want the mandates gone. Remove them from state to state. We want a free country.”

In Canada, the trucker protest is entering its third week. Beginning as a protest over a vaccinate-or-quarantine mandate for cross-border drivers, its scope has expanded to include a more generalized opposition to government rules set up to control the spread of the virus over the past two years.

Truck drivers have occupied the Canadian capital of Ottawa and now are blocking the Ambassador Bridge, the busiest international land border crossing in North America and a critical lifeline for the automotive industry, between Windsor, Ontario, and Detroit, Michigan. Truckers have also blocked smaller border crossings in Canada’s Alberta and Manitoba provinces.

Some U.S. Republicans have vowed to investigate GoFundMe after it took down a page accepting donations in support of protesting truck drivers.

On Friday, during a protest against New York’s school mask mandates in Buffalo, demonstrators put money into cans that were passed around for donations for Canadian truckers. Demonstrators also rolled around a wheelbarrow that they filled with coins and bills for the truck drivers.

Earlier this week, the U.S. Department of Homeland Security warned law enforcement agencies of a possible convoy of protesting truckers gathering at this weekend’s Super Bowl in Los Angeles, according to several media reports.

The agency said in a statement that it is tracking reports of a potential convoy traveling to several U.S. cities, but the statement did not allude to the Super Bowl.

A variety of U.S. groups are organizing on social media platforms such as Telegram, TikTok and Facebook, aiming to tap into frustration that appears to be growing among Americans over COVID-19 mandates. In some cases, logistics for possible large convoys across the nation are part of those discussions.

One of the efforts, dubbed “The People’s Convoy,” which has 64,000 followers on Facebook, is planning a rally in Coachella Valley in Indio, California, on March 4. Truck drivers will then convoy from California and other parts of the country to Washington, D.C., to show their disapproval over mandates.

“It’s happening whether you like it or not, it’s going to happen,” Brian Brase, one of the group’s organizers, said in a TikTok post. “It’s not a right issue. It’s not a left issue. It’s not an anti-vax thing. It’s about the constitution and our rights as Americans.” Brase could not be reached immediately for further comments.

(Reporting by Brendan O’Brien in Chicago and Carlo Allegri in Buffalo; Editing by Mark Porter and Grant McCool) 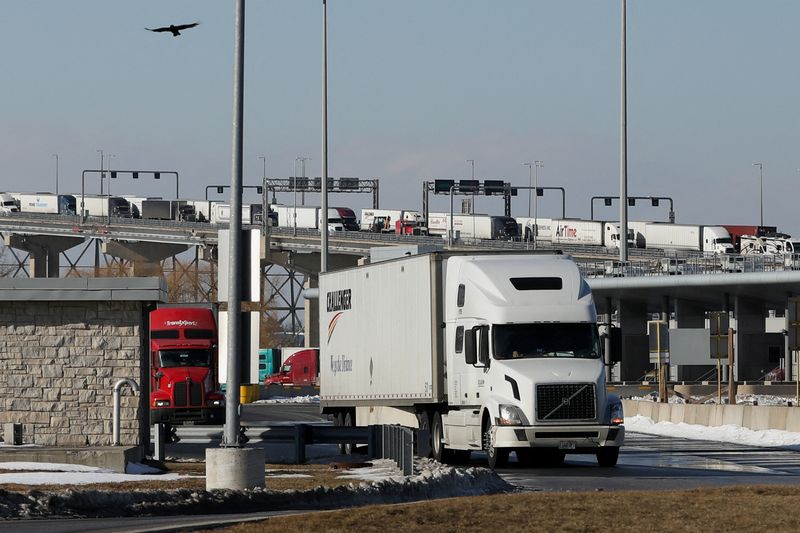