INGLEWOOD, Calif. – The new SoFi Stadium will get its day in the sun when the $5.5 billion venue hosts the NFL’s championship game on what is forecast to be the hottest ever Super Bowl Sunday.

Temperatures are expected to be in the mid-80s and the architects behind the massive “indoor-outdoor” stadium said the conditions would play to its strengths.

The stadium’s curved form and aerodynamic canopy was inspired by the Southern California coastline to promote natural cooling, said Lance Evans, HKS director of sports and the architect who led the stadium’s design.

“Because there are no walls — the roof is ‘anchored’ at four different spots — fans feel the Pacific breeze while ‘inside’ the 70,000-seat stadium,” Evans told Reuters in an email.

Perforations on the canopy act as a valve to let hot air out and cool air in, said Bill Zahner, CEO of Zahner, which implemented HKS’s vision for the semi-translucent roof.

“Even the color of the canopy was deliberate – the custom white finish of the facade panels reflects the sun’s infrared light,” Zahner said.

At night a 14-acre LED screen on the roof, essentially a giant television, serves as a “welcome card” to visitors landing at nearby Los Angeles International Airport (LAX), displaying images of all kinds.

“@RamsNFL bring another ring to LA!” read a tweet by Lakers great Earvin “Magic” Johnson that appeared on the stadium, which is home to the LA Rams, who will take on the Bengals in Sunday’s championship game, and the LA Chargers.

Once inside, fans are greeted by a 360-degree, double-sided infinity screen that draws them into the action no matter where they are in the stadium.

At more than 125 yards long and 75 yards wide, the screen is larger than the field it hangs above and is the largest ever made for a sports venue.

And there is still more to come.

Commercial and residential properties are set to open in Hollywood Park, with SoFi, funded and developed by Rams owner Stan Kroenke, serving as the centerpiece.

SoFi’s schedule is already filling up.

The stadium is set to host College Football Playoffs next year, will likely host World Cup soccer matches in 2026, may hold the Super Bowl again in 2027, and will be the stage of the Olympics opening ceremony in 2028.

“We wanted to create the living room for the city of Inglewood while also creating a global stage,” said Mark Williams, a global director at HKS.

“It will be very visible to the world as it hosts mega events, like what we’re going to see with the Super Bowl.” 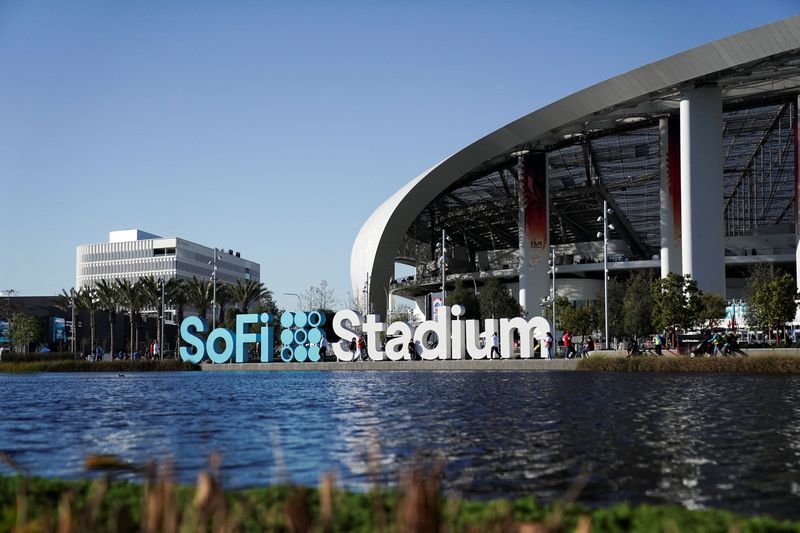