BEIJING – The world’s top anti-doping authority will investigate the entourage of 15-year-old Russian figure skater Kamila Valieva who tested positive for a banned drug, plunging her into a doping scandal at the Beijing Winter Olympics.

Valieva, whose Olympic future will be decided after a Court of Arbitration for Sport (CAS) hearing that started at 8:30 p.m. Beijing time (1230 GMT), effortlessly completed a clean run-through of her short programme in practice on Sunday.

Watching from the sidelines were her three coaches, Eteri Tutberidze, Sergei Dudakov and Daniil Gleikhengauz, as well as the team doctor Filipp Shvetsky and a physiotherapist.

The World Anti-Doping Agency (WADA) said in a statement to Reuters on Sunday that it would ask its independent Intelligence and Investigations Department to investigate the coaches, doctors and other adults surrounding the athlete.

Earlier, the International Olympic Committee (IOC) said it had formally asked WADA to launch an investigation.

WADA also said that the Russian Anti-Doping Agency (RUSADA) has indicated it had already started investigating the entourage because Valieva is a minor.

From the hotel where the athlete’s fate was being decided, CAS Director General Matthieu Reeb told reporters that he expected Valieva to testify via video link and that the hearing could go on all night.

“We don’t know how long it will take,” Reeb said. “It could be a long night. We have many parties involved. All are represented by lawyers.”

The athletes and all parties involved would testify via video link.

“All the lawyers, all the parties will be on video. The athlete will be on-line and will testify on-line,” Reeb said. “We suppose she will speak in Russian and we will have an interpreter.

“We can expect it will be a long night. After the meeting we will tell the media when we will announce the final decision. It will be tomorrow afternoon but at what time we don’t exactly know yet,” he said.

Valieva tested positive for a banned heart drug at her national championships last December, but it took more than six weeks for her to be notified, allowing her to compete in Beijing.

Her future at the Games, and a gold for the Russian Olympic Committee (ROC) in the team event that she dominated on Monday, now hang in the balance amid a global outcry over Moscow’s doping history.

Tutberidze, the most sought-after figure skating coach in Russia, has not responded to Reuters emails.

On Saturday, she said she was certain Valieva was “clean and innocent” in an interview with Russian state television.

At 15, Valieva is one of the youngest athletes to have a positive test revealed at the Olympics, prompting outrage and questions about the role of the adults around her and the continuing scourge of Russian doping in international sport.

The IOC set up the entourage commission in 2010 as positive drug cases of athletes mounted in the 2000s, especially with the re-testing of samples of past Olympics.

Russia’s state-backed doping scandal after the 2014 Sochi Olympics made more apparent that athletes often did not act alone but were supported by a network, including medics, coaches, agents and family and friends.

The commission can sanction individuals for a number of violations that include doping, unsportsmanlike conduct and harassment. Sanctions can range from reprimands to permanent exclusion from the Olympics.

On Sunday, however, it was Valieva’s future at the Games that was being debated. A panel of three judges for CAS were hearing arguments from the IOC, WADA and International Skating Union to reinstate a ban lifted by the Russian Anti-Doping Authority on Feb. 9.

At stake is Valieva’s entry in the women’s singles event on Tuesday. CAS has said it will notify all parties on Monday.

The fate of the gold medal that has not been awarded for the Feb. 7 women’s team event is likely to take longer to clear up. The United States and Japan are also waiting in the wings for their medals.

“The athletes are a bit disappointed that they have to wait for the medal ceremony to happen -– they had really worked so hard for that medal,” said Japan’s chef de mission, Hidehito Ito. 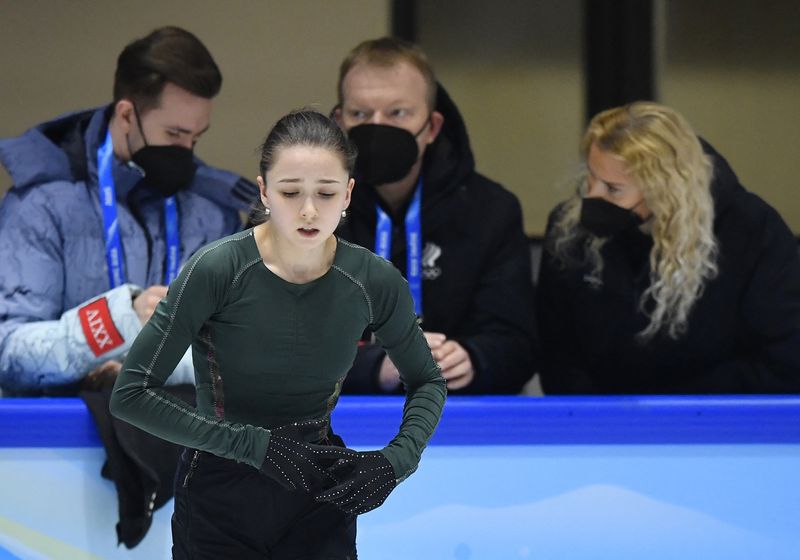 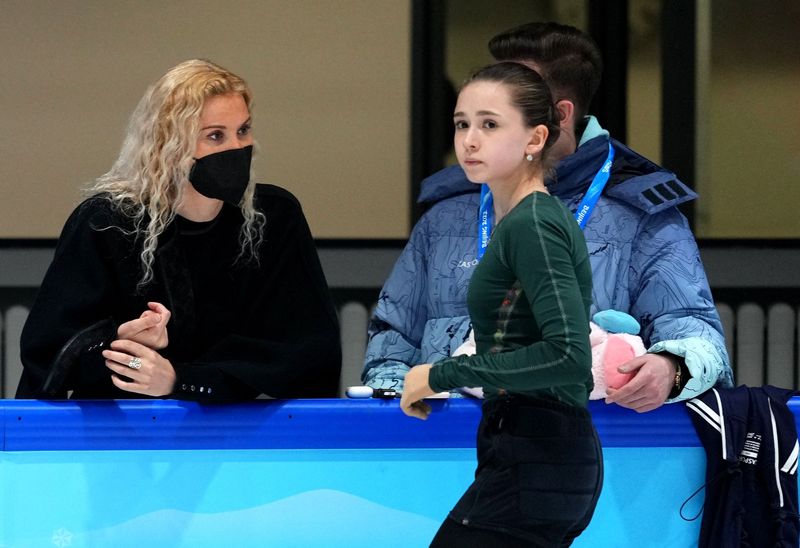