Below are some reactions to Trudeau’s move gathered from press conferences and social media.

The standard for invoking the Emergencies Act “has not been met,” the Canadian Civil Liberties Association said in a statement.

The Act exists for situations that seriously threaten “the ability of the Government of Canada to preserve the sovereignty, security and territorial integrity of Canada” and that “cannot be effectively dealt with under any other law of Canada,” adding the use of such legislation “should not be normalized.”

PHIL BOYLE, ASSOCIATE CHAIR FOR LEGAL STUDIES AT THE UNIVERSITY OF WATERLOO

“It seems an interesting strategic move there to go after the money. That seems appropriate. One of the things that worked in Windsor, with the Ambassador Bridge, was the threat of taking away their licenses. If your livelihood depends on license, you’re going to think twice before putting that at risk. So that might very well work with the case of Ottawa,” Boyle told Reuters.

“No doubt there will be some litigation to come of this, considering it’s never been done before… If these emergency measures are targeted within a particular province… Trudeau would only do it if he had the relevant province on board. Maybe that would lessen the potential for litigation.”

“It seems that they’re mostly going to focus on orders and regulations relating to finance… and that’s a fairly effective tool,” Lindsay told Reuters.

“I suspect following the money and then turning the money off is probably a good strategy and not one that’s easily done… temporary short-term measures that wouldn’t normally be acceptable can be put in place.”

“They can certainly do things quicker, which is certainly the intention of these orders and regulations under the Emergencies Act. To be able to do things when it’s useful rather than six months later when you’ve gone through all the regular democratic processes and regulations or an Act changed.


“I imagine this will start of week full of political discourse over whether the government overstepped or not.”

“There’s the danger this could create more problems, that’s why this has to be done with the cooperation of premiers and if they don’t want help, then the federal government needs to hang back. It has to be very targeted, very strategic and very restrained, because these are enormous powers that are being implemented.”

“I’ll support the federal government and any proposals they have to bring law and order back to our province, to make sure we stabilize our businesses and trade around the world as the world is watching us right now, wondering if it’s a stable environment to open up businesses and expand businesses,” Ford told reporters.

“These occupiers, they’re doing the total opposite what they say they’re there to do. They’re hurting hundreds of thousands of families, millions of jobs across the province.”

“The protest hasn’t been a material market mover of the Canadian dollar but ending the protest with emergency powers would remove the tail risk of a longer disruption.”


Legault told reporters that imposing the act risks putting “oil on the fire” by further polarizing the population and argued that local police in the mostly-French speaking province have the situation under control.”

“I was very clear with the Prime Minister, that the federal emergency act must not apply in Quebec. I think we don’t need it. I think that at this moment it would not help the social climate. There’s a lot of pressure right now and I think we have to be careful. So it’s about time we put all Quebecers together. But I can understand that enough is enough in Ottawa. You can protest but you cannot do what they are doing since two weeks.”

“We would prefer that the Emergencies Act not be invoked, but if it is we would very much prefer that it not be applied to Alberta,” Kenny told a media briefing.

“In my view, the sweeping effects and signals associated with the never-before-used Emergencies Act are not constructive here in Manitoba, where caution must be taken against overreach and unintended negative consequences. While the situation is very different in Ontario, this ultimate federal legislation should only be considered on a measured and proportional basis, in locations where it is truly needed,” Stefanson told reporters.

“The illegal blockades must end, but police already have sufficient tools to enforce the law and clear the blockades, as they did over the weekend in Windsor. Therefore, Saskatchewan does not support the Trudeau government invoking the Emergencies Act. If the federal government does proceed with this measure, I would hope it would only be invoked in provinces that request it, as the legislation allows,” Moe told reporters


“The federal government must consult with provinces and Cabinet must believe the protests rise to the level of a national emergency. Can it truly be said the security of Canada is threatened by largely non-violent protests? Certainly, our sovereignty and territorial integrity are not at risk,” West tweeted.”

(This story refiles to fix typo in heading before 5th paragraph) 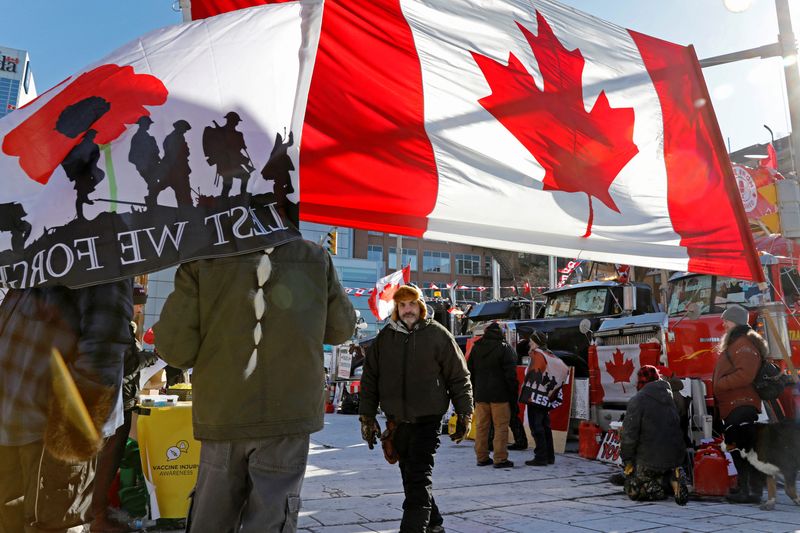