WASHINGTON -Raging inflation in the United States took center-stage in the Senate on Tuesday, as Democrats focused on legislative efforts to ease the problem and Senate Republican Leader Mitch McConnell met with Federal Reserve Chair Jerome Powell on the matter.

With public opinion polls highlighting Americans’ discontent over rising consumer prices for everything from groceries to gasoline, Senate Democrats met in private to discuss an array of possible moves to address inflation.

“You’re going to see a lot of activity in March from us on that issue,” Senate Majority Leader Chuck Schumer told reporters following a closed-door meeting Democrats held to discuss possible legislative fixes.

Meanwhile, Powell visited with McConnell in the Capitol for about 30 minutes in a meeting the Republican leader said would focus on inflation and the U.S. economy. Powell declined to comment to reporters as he exited. A McConnell aide had no comment on the meeting.

Schumer ticked off several pockets of the economy that could be targeted in legislation, some of which already have been included as parts of other pending Democratic bills.

He said those include lowering the cost of prescription drugs and foods, easing a shortage of semiconductor chips that has contributed to higher prices of automobiles and suspending a federal tax on gasoline.

Democrats said they were seeking bipartisan solutions, but it was not clear which of the proposals under consideration could gain traction.

Congress can do “very little” about inflation in the short run, University of California, Berkeley, economics professor Yuriy Gorodnichenko said. Gas prices are driven more by market swings like what might be precipitated by a Russia-Ukraine conflict than by the size of a gas tax, he said in a phone interview.

Related News:   EXPLAINER - Why was the Turkey-Syria earthquake so bad?

“I’m not sure there’s much Congress can do about it,” he said, adding that most Americans experience inflation across a broad spectrum of items, from bread to cars to clothing, over which lawmakers have little sway.

In a Senate split 50-50 between Democrats and Republicans, broad consensus would be needed and already there were red flags being raised to some of the ideas.

“They (oil companies) are experts in … screwing consumers and in corrupting Congress and in polluting our world. So, I want to be very careful about what I give them,” Democratic Senator Sheldon Whitehouse told reporters when asked about legislation to suspend the gasoline tax through the rest of 2022.

No. 2 Senate Republican John Thune, in a Senate speech, said doing so would blow a “huge hole” in federal funds for maintaining and upgrading highways.

Throughout Joe Biden’s year-old presidency, McConnell and his fellow Republicans have blasted Democrats for policies they say stoked inflation.

An inflation rate that hit a 40-year high in January is promising to become a central issue in the midterm election campaigns for Congress that will culminate with Nov. 8 elections. Republicans are vying to regain control of the Senate and House of Representatives where Democrats currently hold narrow majorities.

In the 12 months through January, the Consumer Price Index rose 7.5%.

Early suggestions by the Biden administration that inflation would be fleeting appeared to have caught Democrats flat-footed, as they now scramble to address it. 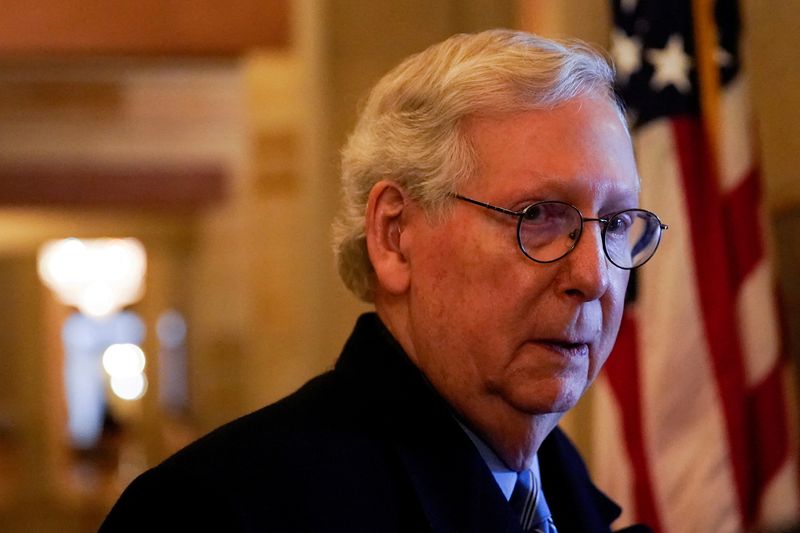