By Jonathan Spicer and Nevzat Devranoglu

The plan is risky given some small protests have already emerged in the face of annual inflation nearing 50%, and with many economists expecting price and wage pressures to persist throughout the year.

The lira, which plunged 44% last year, is also potentially vulnerable to the U.S. Federal Reserve’s interest rate tightening and, closer to home, any Russian military incursion into Ukraine that could strain Ankara’s ties with Moscow and NATO.

But for now, Erdogan – whose push for unorthodox rate cuts initially sparked the crisis last year – has managed to regain some confidence among savers and investors with a combination of state-backed deposit guarantees and costly market interventions.

That has bought the government time to let cuts in sales taxes work to cool off prices and ease the pain for consumers, while it seeks to boost Turkey’s export sector with the help of low lending rates and planned capital injections into state lenders.

Ankara expects those steps, combined with newfound lira stability and eventual base effects, will allow annual inflation to peak in April or May and recede by year end to about 24%, far below analysts’ forecasts.

The stakes are high for Turkey’s leader of 19 years who faces an election by mid-2023 that current polls suggest he might lose.

Ratings agencies and analysts say that while the budget can fund such measures for now, costs and inflation may spiral if the lira comes under renewed pressure. Simply raising interest rates instead would be a better way of containing inflation and bolstering the currency, they say.

Real rates are far in negative territory at 35% and official reserves low and deep in the red when accounting for swaps, leaving Erdogan’s experiment vulnerable to another crisis.

“The government is now using the fiscal space to balance the economy to the extent they can, but of course you can only pull this lever so far given inflation and … massively negative real rates,” said Anupam Damani, New York-based head of international debt at investment manager Nuveen.

Erdogan’s key goal is to narrow the chronic current account gap – near $15 billion last year – which would replenish official reserves possibly helping the lira, and there are early signs he may have some success there.

As Turkey’s beaches begin filling up in May, Ankara forecasts tourist arrivals to return to pre-pandemic numbers with close to $34 billion in revenues expected to wash in, shoring up the sector that accounts for over 10% of the economy. Turkey’s car rental association told Reuters the fleet size should rebound 25% this year, reflecting visitor expectations.

However, it is not unusual for Turkey to record current account surpluses in the summer only to swing back into deficit in the winter and it may take an export miracle to change that pattern.

After a series of cuts last year to 14% in the policy rate, the lira crashed to all-time lows in December and inflation soared. Since then, however, the depreciation-protected deposits and central bank’s forex sales have calmed markets.

Households and companies have poured some 350 billion lira ($25.5 billion) into the protected accounts, nearly half converted from hard currencies, according to official data.

The central bank has boxed the exchange rate into a tight range near 13.5 to the dollar so far this year, a far cry from the lira’s wild swings in December.

Bankers and economists estimate the central bank spent $20 billion in December and $3 billion in January supporting the lira, but next to nothing this month and Finance Minister Nureddin Nebati said last week there was no more need to intervene in markets.

Erdogan has promised to protect Turks from “crushing” annual price rises, including 50% for electricity, 55% for food and 76% for energy. The value added tax on basic foods was slashed this month and more relief, possibly for housing, is expected.

Nebati has urged patience and said Turks would wake up to a “very different” reality by the middle of the year.

He also told investors in London the economy would be in even better shape by the election and said now was the “perfect” time to invest, according to one participant.

Goldman Sachs also said that while the state’s deposit protection scheme successfully triggered “a wave of dedollarisation” its success adds to the state’s currency risk exposure.

A test of business confidence comes early next month when February data could show an easing of the trade deficit after it soared in January as a result of a stockpiling rush in the face of soaring import prices, analysts said.

Meanwhile, the patience the government is asking for is wearing thin. Food couriers, nurses and other workers have carried out strikes in recent weeks, joining other scattered rallies in some cities.

Esat Celik, 32, an Istanbul construction worker relying on odd jobs, said he spends more than half his income on food and children’s needs. “I am unemployed now,” he told Reuters. “It is very hard to continue like this but let’s see how long it lasts.”

(Writing by Jonathan Spicer; Additional reporting by Can Sezer, Ezgi Erkoyun and Ceyda Caglayan in Istanbul, Rodrigo Campos in New York and Sujata Rao in London; Editing by Tomasz Janowski) 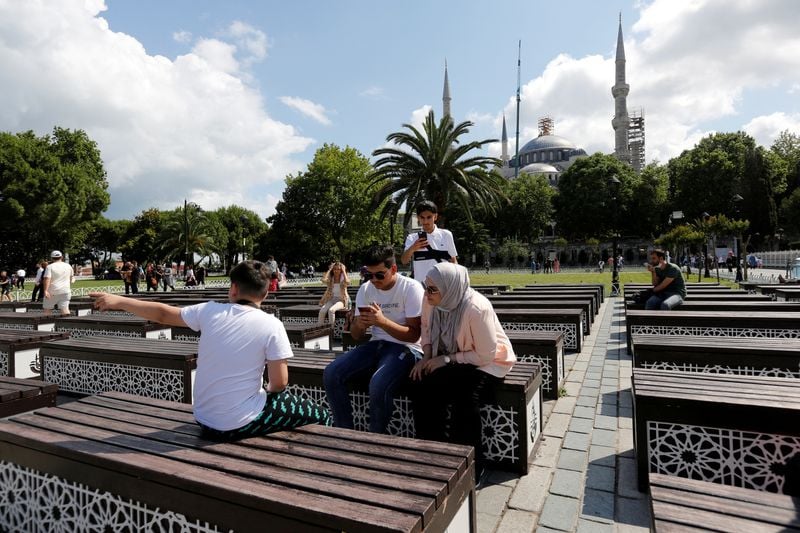