By David Ljunggren and Julie Gordon

OTTAWA -Police in the Canadian capital Ottawa on Wednesday warned truck drivers blockading the downtown core to depart or face arrest in crackdown seeking to end a three-week-old protest over COVID restrictions.

Interim Police Chief Steve Bell vowed “to take back the entirety of the downtown core and every occupied space” in “coming days.”

Police handed leaflets to truckers that said, “You must leave the area now. Anyone blocking streets … may be arrested.” Police also ticketed some of the hundreds of vehicles blocking Ottawa’s downtown core.

At least one large rig left while some demonstrators put the leaflets into a toilet placed in front of a truck. Some truckers blew their horns in violation of a court order forbidding such behavior.

Wendell Thorndyke, who has parked in front of parliament for 21 days, insisted he had no intention of leaving. “We think it’s cute. They turned all the cops into meter maids,” he said as he filled his engine with oil.

In a video posted by CTV reporter Mackenzie Gray on Twitter, Tamara Lich, a prominent fundraiser for and organizer of the Ottawa protest, demanded an end to all state-of-emergency declarations, vaccine mandates and COVID-19 restrictions


Sources told Reuters that frustration with the failure of police to lift blockades at the border and in the capital ultimately drove Trudeau to seek emergency powers.

Mendicino said there were links between protesters in the capital and members of a far-right organization who were charged in an Alberta border blockade earlier in the week.

Police arrested 13 people in the blockade at the town of Coutts, Alberta and seized weapons. Four members of the group have been charged with conspiracy to commit murder.

“What we’re beginning to see emerge now are the hallmarks of a sophisticated and capable organization of a small number of individuals …. driven by an extreme ideology that would seek … to overthrow the existing government,” he said.

Mendicino spokesperson Alex Cohen said the minister was referring to the group Diagolon, which the Canadian Anti-Hate Network describes as a far-right network espousing conspiracy theories. A body armor vest seized by police in Coutts had a patch with Diagolon’s emblem, a black background with a white diagonal stripe.

“I hope he (Mendicino) was not referring to me or any of my friends because that would be extremely dangerous language,” Jeremy MacKenzie, the group’s de facto leader, told Reuters.

“I think they are looking for a bogie-man to detract from the (protest) movement and what the convoy people are trying to achieve.”

Police in Windsor, Ontario said they intercepted a small convoy of trucks on Tuesday that they suspected wanted to reinstate a blockade on the Ambassador Bridge to Detroit, which is crucial to trade with the United States.

Protesters blocked the bridge for six days before being removed on Sunday. The incident prompted U.S. President Joe Biden to express his concerns to Trudeau.


Canadian border guards on Wednesday turned back My Pillow founder Mike Lindell and a truck carrying 10,000 pillows for the protesters because he was unvaccinated and had not taken a pre-arrival COVID-19 test, a government source said.

In a telephone interview, Lindell, a vocal supporter of former U.S. President Donald Trump, denied he had been at the border. But he said his truck had obtained a permit and would try crossing again on Thursday.

“Tomorrow morning, we’re coming across the border,” said Lindell. “And we’ll be in Ottawa, we hope, by the afternoon delivering the pillows.” 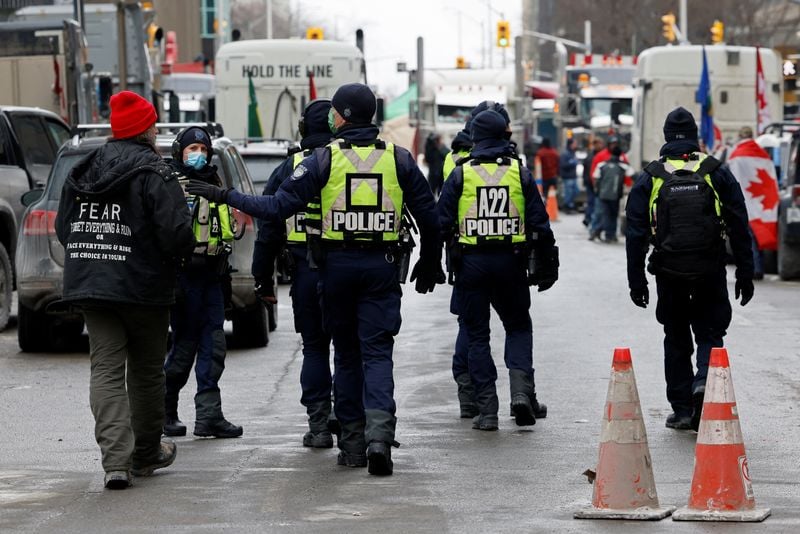 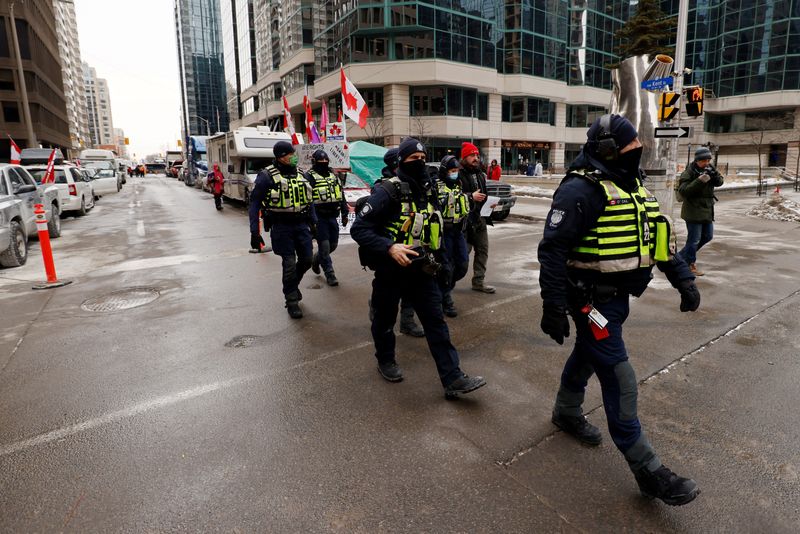 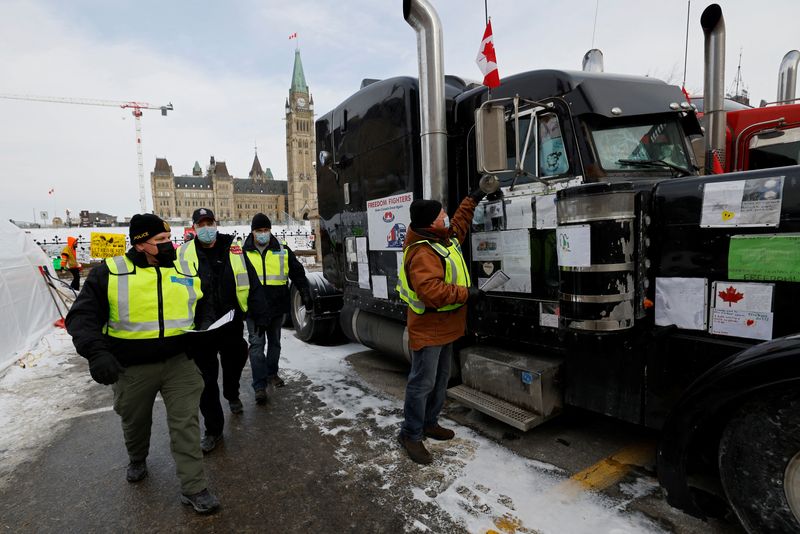 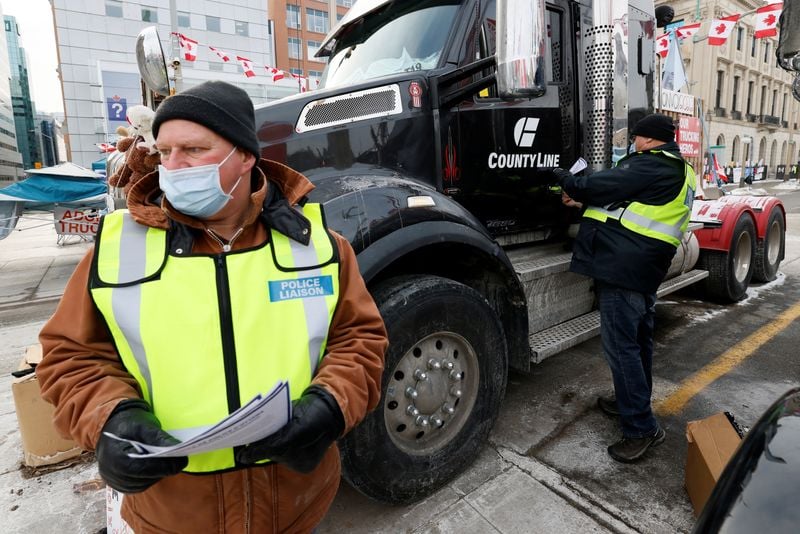 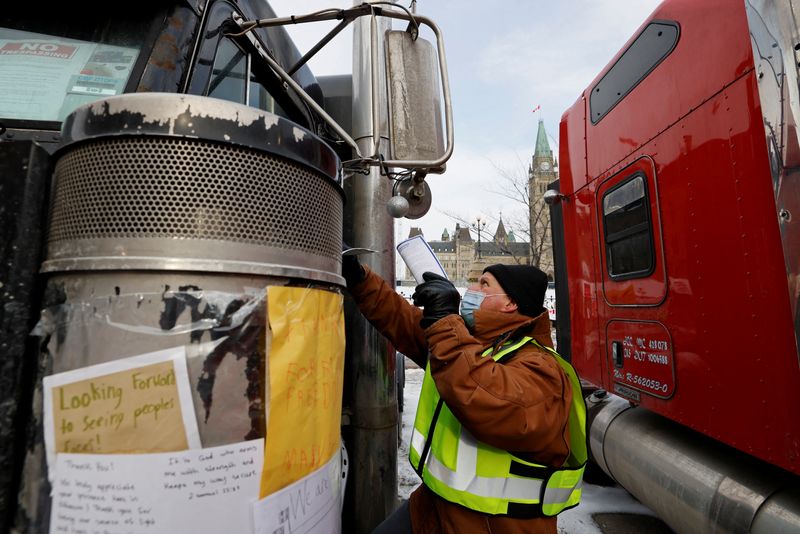