By Sarah Marsh and Madeline Chambers

MOSCOW/BERLIN – German Chancellor Olaf Scholz has faced accusations of weak leadership in the Ukraine crisis and of being too soft on Russia, but his unexpectedly combative stance in talks in the Kremlin with President Vladimir Putin has earned him plaudits.

Political pundits wondered how the mild-mannered Scholz, who took office in December, would fare on Tuesday stepping into “the lion’s den”.

Russian officials have been known to publicly taunt or seek to outplay visitors in a test of their mettle. Putin invited his Labrador into a meeting in 2007 with Angela Merkel, Scholz’s predecessor as chancellor, despite her well-known fear of dogs.

But while maintaining his trademark quiet, measured tone, Scholz also proved quite assertive at a joint news conference with Putin during a day-trip to Moscow that was part of frantic diplomacy to avert a Russian invasion of Ukraine.

When Putin criticised NATO, saying it had launched a war in Europe by bombing Serbia in 1999, Scholz hit back, saying this was done to prevent genocide, a reference to the persecution of ethnic Albanians in Kosovo.

Putin countered that Russia considered the treatment of ethnic Russians in the Donbass region of eastern Ukraine to be genocide. In a solo news conference later, Scholz said Putin’s use of the word genocide was wrong.

Scholz also poked fun at Putin’s fears of NATO’s eastern enlargement, given it was not on the agenda any time soon, and at the Russian leader’s lengthy time in power.

“I don’t quite know how long the president plans to stay in office,” he said, with a grin towards Putin, who has led Russia as president or prime minister for more than two decades. “I have a feeling this could be a long time, but not forever.”

Asked later by reporters about the jousting with Putin, Scholz smiled, saying this had given a flavour of what had been “intense” four-hour talks.

“In Moscow, Olaf Scholz finally puts his foot down,” wrote Germany’s top-selling Bild newspaper, which has been critical of the Social Democrat chancellor’s performance.

‘BERLIN IS WAKING UP’

On the fundamental issue at stake, critics say Scholz still ceded too much to Russia by minimising the possibility of Ukraine joining NATO. His comment prompted Germany’s ambassador to the United States, Emily Haber, to tweet a clarification that “Ukraine has the sovereign right to seek NATO membership”.

Putin may also have chosen not to confront Scholz too aggressively as Russia still has comparatively close relations with Germany compared to those with other Western countries, said Marcel Dirsus, Non-Resident Fellow at the Institute for Security Policy at Kiel University.

However, the mere fact of the Moscow visit, along with Scholz’s performance, suggest, Dirsus added, that “Berlin is waking up, they’ve realised this is a serious situation one can’t sit out, and their inaction is interpreted as indirect support for Moscow. And they’ve toughened their stance.”

Scholz also voiced concerns at the joint news conference about human rights and media freedoms in Russia, and the first question went to a journalist from Deutsche Welle travelling in his delegation. The Kremlin said this month it was shutting the German channel’s Moscow operations down.

His more assertive tone could go some way to restore his credibility as a player in Europe. French President Emmanuel Macron had taken the lead lately on the Ukraine crisis in Europe with a Moscow visit, albeit with mixed results.

Gwendolyn Sasse, senior fellow at Carnegie Europe, said it was also important that Scholz demonstrated he was speaking for Europe, not just Germany. He headed to Moscow only after meeting in person with the leaders of France, Poland, the Baltic states, and Ukraine. Macron had visited Moscow before going to Kyiv.

“He will have delivered the message that Europe is united,” Sasse said. “And that’s exactly what the Kremlin doesn’t want.”

(Reporting by Sarah Marsh in Berlin, Madeline Chambers in Berlin and Mark Trevelyan in London; Editing by Sam Holmes and Gareth Jones) 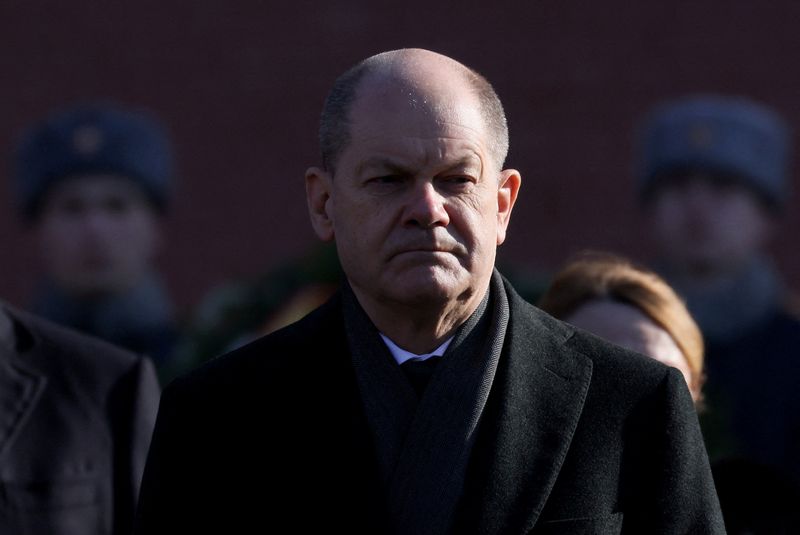