OTTAWA – Canadian Prime Minister Justin Trudeau’s support of vaccine mandates in fighting COVID-19 helped him win re-election five months ago, but now he looks increasingly isolated as restrictions are being lifted around the world.

Denmark, the Netherlands, Ireland, Sweden, Norway, Israel, Britain and Spain and most of the United States are easing or lifting COVID restrictions, and most of Canada’s provincial governments are rolling them back, too.

But Trudeau has doubled down on federal vaccine mandates and this week invoked emergency powers to seek an end to weeks of protests against his government’s pandemic restrictions.

Protesters have occupied the core of Ottawa since late January and last week cut off major trade corridors to the United States.

Trudeau is trying to regain control, but has drawn sharp criticism even from some of his own Liberal Party lawmakers, including Nate Erskine-Smith, who said “divisive rhetoric” should be dropped.

“The challenge for the Prime Minister is that he’s looking dogmatic at not pragmatic,” said independent pollster Nik Nanos, founder of Nanos Research.

“This protest movement has put a spotlight on him being … divisive, because the fact of the matter is all Canadians are frustrated,” Nanos said, adding it would now be tougher for Trudeau to win another election, whenever it may come.

While most Canadians approve of the mandates and 80% are vaccinated, after two years many are tiring of pandemic restrictions.

During the protests, the majority of the country’s 10 provinces – including Ontario and Quebec – began lifting them, saying they moved because of the rapidly falling COVID-19 case numbers in the past few weeks, rather than due to pressure from demonstrators.

“The world is done with (the pandemic), so let’s just move forward,” Ontario Premier Doug Ford said on Tuesday.

Ford said he would lift proof-of-vaccination requirements used by non-essential businesses like restaurants on March 1. A Leger survey from last week said a third of Canadians think now is the time to lift all restrictions.

Trudeau says vaccination remains the best way to get through the pandemic, defending the mandates despite the sharp reduction in cases linked to the Omicron variant.

The Trudeau government’s approval rating fell six percentage points between Jan. 12, before the protests began and Feb. 8, while they were ongoing, an Abacus Data poll said this week.

Last week, one of Trudeau’s own lawmakers, Joel Lightbound, accused the prime minister of being divisive when he embraced vaccine mandates as a wedge issue in last year’s campaign.

“It’s time to stop dividing Canadians, to stop pitting one part of the population against another,” Lightbound said on Feb. 8. “Time to stop with the division and the distractions. It’s time to choose positive, not coercive methods.”

A handful of backbench legislators, including Erskine-Smith, have since expressed support for some of Lightbound’s views. While Lightbound resigned as Quebec caucus chair, he remains a Liberal lawmaker.

The Liberals say the recent election makes it clear what Canadians want.

“We campaigned on vaccine mandates, and parties that supported vaccine mandates got the majority in the house. And that’s why we were able to do them as soon as we got elected,” said a senior Liberal Party source when asked about the criticism from within the party.

The vaccine mandate for federal workers introduced after the election has brought the vaccination rate among federal employees to 98.2%. One for cross-border truckers that started in January and sparked the ongoing protests has helped bring the vaccination rate to 90% among international drivers.

When Trudeau this week invoked emergency powers to put an end to the protests, he recognized that there was a split in public sentiment.

“I know people are frustrated. I hear it … But blockading streets and critical infrastructure and depriving your neighbors of their freedoms” is not the right way to protest, he said. 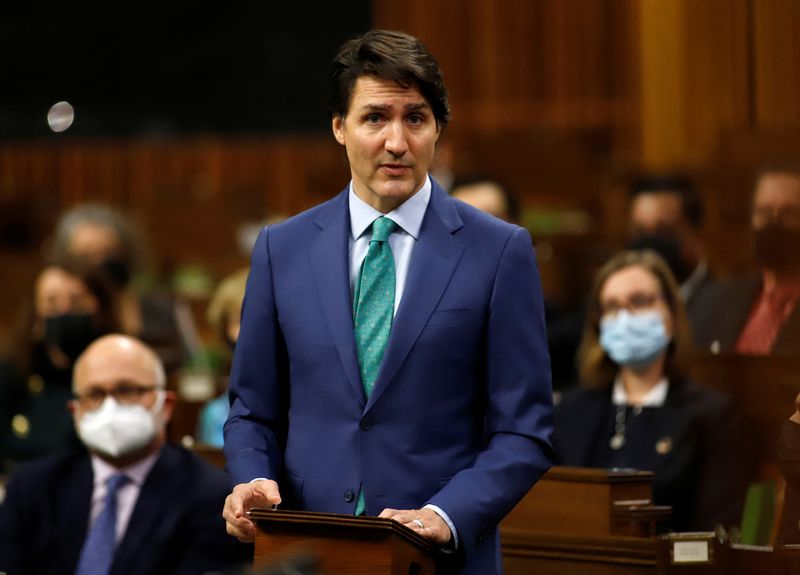