WASHINGTON – Canadian Finance Minister Chrystia Freeland stepped well beyond economic policy at a G20 finance meeting on Friday to issue an “impassioned” warning to her Russian counterparts not to invade neighboring Ukraine, two sources familiar with her remarks said.

During a contentious G20 meeting hosted by Indonesia, Freeland directly addressed Russian Finance Minister Anton Siluanov and central bank governor Elvira Nabiullina and warned them that Russia would face “crushing” sanctions in the event of an invasion.

“If Ukraine is invaded, all of our economies and citizens will suffer,” Freeland told them, according to one of the sources. “The economic sanctions on Russia will be swift, they will be coordinated, they will be crushing. Like-minded countries agree on this course of action. And we are united and resolute.”

Freeland’s press secretary, Adrienne Vaupshas, did not respond to a Reuters request for comment on her speech. Freeland participated in the meeting on a web link from Ottawa.

The source said that Freeland, previously Canada’s foreign minister, took an opportunity to speak directly to influential Russian policy makers at a critical moment as tensions intensified on the Ukraine-Russian border, where Russia has amassed more than 100,000 troops.

“Do not hurt yourselves in doing this,” Freeland said, according to the sources. “Let’s not endanger the collective here, including economically.

A second source said that the Russian officials responded to Freeland’s “impassioned” speech by saying that reports on the threat of an invasion were “fake news.”

G20 finance officials on Friday argued over communique language describing geopolitical risks to the global economy, deleting a reference to “current” tensions in a final statement after objections by Russia and China.

The disagreements over this issue and treatment of debts for poor countries delayed the communique for hours as markets fretted over the prospect of war in Ukraine.

Freeland, a fluent Russian speaker who once served as the Financial Times’ Moscow bureau chief and whose grandfather was born in Ukraine, delivered one line in Russian, according to the first source, but said in English: “You may think that for a number of us like-minded democracies here, you may think that democracies are weak. But do not doubt us and do not doubt our resolve.” 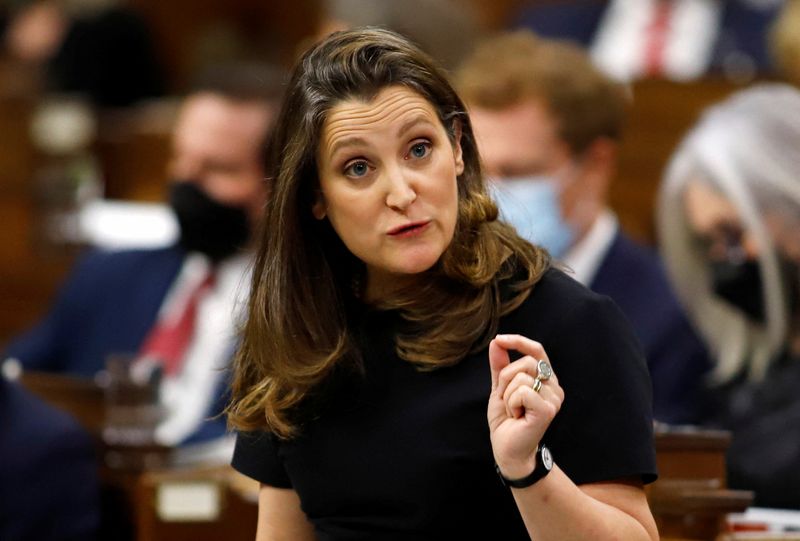