By Sabine Siebold and Matthias Williams

MUNICH/KYIV -Reports that Ukraine has been shelling regions controlled by Moscow-backed separatists and inside the Russian border are “pure lies”, Ukraine’s president said on Saturday, adding that his country would not respond to provocations.

President Voldymyr Zelenskiy was addressing senior Western security officials at the annual Munich Security Conference amid reports of explosions inside Russian territory to Ukraine’s east, and in breakaway regions of Ukraine.

“What was shown yesterday in the temporarily occupied territories, some shells allegedly flying from our side, some flying all the way to Rostov, these are pure lies,” he said. “They are blowing up something on their side.”

He urged Western countries not to wait for a possible Russian invasion to impose sanctions on Russia.

Russia, which has massed some 150,000 troops along Ukraine’s eastern borders, has said that for its own long-term security it needs a commitment that Kyiv will never join the NATO military alliance.

But leaders of Western countries, which believe Russia is preparing a possible invasion of Ukraine, said Russia would face severe consequences if it attacked, warning Moscow against attempts to redraw Europe’s borders.

“We have prepared economic measures that will be swift, severe, and united,” she said. “We will target Russia’s financial institutions and key industries.”

Both Ukraine and NATO members have refused to rule out Kyiv one day joining the alliance, though few expect that soon.

But, referring to an explosion at a kindergarten in the occupied east, Zelenskiy urged delegates not to let the rhetoric obscure the plight of ordinary people.

“Those kids aren’t heading towards NATO. They are heading to their classrooms,” he said.

Many delegates at the conference called for a de-escalation by Russian President Vladimir Putin, who on Saturday presided over a nuclear preparedness exercise involving firing ballistic missiles.

“History has not yet been written: there is an exit that the Russian government can choose at any time,” said German Foreign Minister Annalena Baerbock after a meeting of Western foreign ministers.

“Our common message to them is very clear: Don’t make this fatal mistake. Withdraw your troops … Let’s talk.”

She said Western countries had agreed tailor-made sanctions packages that were ready to go in the case of various scenarios, including if Russia created a pretext for an invasion by accusing Ukraine of aggression.

German Chancellor Olaf Scholz said Putin appeared to be guided by a particular understanding of history in his approach to Ukraine, but warned that down that path lay endless conflict.

“Putin has clearly been dabbling lately in Russian history,” Scholz said, pointing to Putin’s published texts lamenting the collapse of the Soviet Union and demise of “historical Russia” as well as his talks with the Russian leader this week.

He also dismissed Putin’s talk of a genocide in east Ukraine as “ridiculous”.

The Russian foreign ministry retorted that Scholz’s remark was “unacceptable”, according to Interfax news agency.

Chinese Foreign Minister Wang Yi, whose country and Russia are diplomatically aligned, had harsh words for all sides in the dispute, seeing a revived “Cold War mentality” in the confrontation.

He said no country, not even a superpower, should replace international norms with its own will.

But British Prime Minister Boris Johnson drew a parallel between Russia’s intentions towards Ukraine and China’s towards Taiwan, arguing that Western leaders had a duty to be firm. [L8N2UU0AS]

“If Ukraine is invaded, the shock will echo around the world. And those echoes will be heard in east Asia and will be heard in Taiwan,” he said. “People would draw the conclusion that aggression pays, and that might is right.” 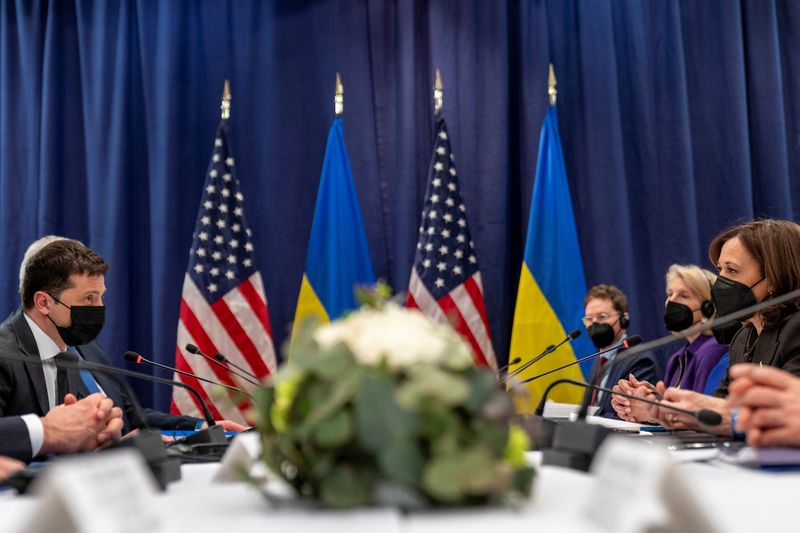