BRUSSELS – The European Union will be ready to launch a second package of sanctions against Russia, including export controls, if Russian troops move beyond the Ukrainian regions held by Russian-backed separatists, European Commission Executive Vice President Valdis Dombrovskis told Reuters on Wednesday.

Russian President Vladimir Putin on Monday recognised the independence of two breakaway regions in the Donbass region of eastern Ukraine that adjoin Russia.

Moscow sent troops there on Tuesday, prompting the EU, the United States and Britain to slap sanctions on Russian politicians and banks and curbing the government’s ability to raise capital via the EU’s financial markets.

But the EU is concerned Russia may continue its invasion beyond the areas controlled by the separatists and EU leaders will hold an emergency summit on Thursday to discuss what to do next.

“Russia decided to go for a major escalation of this conflict by the recognition of the independence of the Donetsk and Lugansk Republics and clarifying that they mean this in the territory of not what is actually controlled by the so-called republics, but the entire Donbass territory, so we are facing a major escalation,” Dombrovskis said in an interview.

“If there is further Russian aggression and further incursion into Ukraine territory we are willing to step up our response also in terms of sanctions.”

Asked what such a stepping up would mean, Dombrovskis said:

“It would concern economic sanctions in the area of trade, for example export controls. The EU has been working on a sanctions package for several weeks, so there are ways how we are able to act quickly and further step up sanctions and do this in cooperation with the United States, Britain and other countries.”

He said the conflict, the sanctions and potential Russian counter-sanctions would have economic repercussions for the EU, but that the seriousness of what is at stake meant the 27-nation bloc would have to accept them.

“Coming with strong sanctions against Russia is going to have some impact on the EU economy and we need to be ready for this,” Dombrovskis said.

“But here we have the security and territorial integrity of Ukraine at stake, and we have the broader security architecture at sake, so we need to be able to react and also take some economic cost, if it is necessary.” 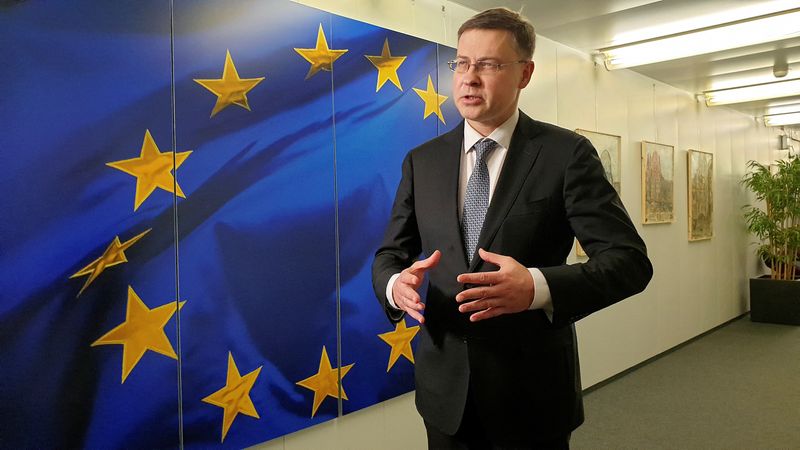