By Julia Harte and Tyler Clifford

Despite freezing temperatures, hundreds of protesters in Manhattan marched to the Russian mission to the United Nations, some cloaked in Ukrainian flags and chanting “stop the war” and “stop Russia now.” New York City has the largest Ukrainian community in the United States.

“I was born in Ukraine … but today I think everybody is Ukrainian,” said Ivana Lotoshynski, a U.S. citizen protesting in Times Square. “It doesn’t matter where you were born, where you live. People are losing their lives right now. Ukrainians are fighting against this regime from Russia and … it’s really devastating.”

Marcin Branowski, a Polish student living in New York, said he felt compelled to show his support for Ukraine.

“My whole family is in Poland and I’m pretty terrified as to what’s going to happen if the situation continues,” Branowski said.

Anstasiia Yashchenko, a resident of Kyiv, told Reuters her family and friends were foremost on her mind while she attended the protest with her boyfriend, who had flown her to New York City 10 days earlier.

“I packed everything in like two suitcases and I just ran out of the apartment and just left,” said Yashchenko, 23. She said she had hoped tensions would lessen, and could not believe her eyes when watching the invasion unfold early Thursday.

In sunny Los Angeles, on the other side of the country, about 300 people gathered outside a federal government building, holding banners and waving Ukrainian flags while many passing motorists honked horns in support.

“We have to show solidarity,” said Andrew, 37, who had his young child strapped to him in a baby carrier. “We stand here for our people,” he said, adding that he had family in both Ukraine and Russia.

The earliest protest on Thursday occurred outside Russia’s embassy in Washington around 1 a.m. EST (0600 GMT), shortly after news broke that Russian forces had launched a massive attack against its neighbor.

Additional protests took place on Thursday in other U.S. cities, including Washington, Houston, and Denver, as well as cities around the world.

Russia’s invasion, the biggest attack on a European country since World War Two, has left many Ukrainian-Americans fearful for the safety of loved ones still living in the eastern European country.

One of the people at Washington’s early-morning protest, which dispersed before sunrise, told Washington television station WUSA that he had been pleading with his parents and sister to leave and get to safety for weeks, to no avail.

Dozens of Ukrainians began fleeing Ukraine into Poland and other neighboring central European countries after Russia’s assault began on Thursday, some taking only what they could carry and leaving behind possessions and pets.

In Russia, protesters defied an official warning explicitly threatening criminal prosecution and even jail time for those calling for or taking part in protests. Hundreds rallied in cities including Moscow, St Petersburg and Yekaterinburg.

By evening, police had detained no fewer than 1,667 people in 53 cities, the OVD-Info rights monitor said. Six hundred were arrested in Moscow alone, the Tass news agency reported.

Russians also joined the U.S. protests. Outside the Russian U.N. mission in Manhattan on Thursday, Julia Makhalova, a 34-year-old who immigrated to New York from Russia in 2017, said she feared Putin’s actions would escalate into a full-blown world war.

“I think it’s very scary overall,” she said in an interview. “The president is literally crazy.”

(Reporting by Julia Harte and Tyler Clifford in New York and Costas Pitas in Los Angeles; editing by Jonathan Oatis) 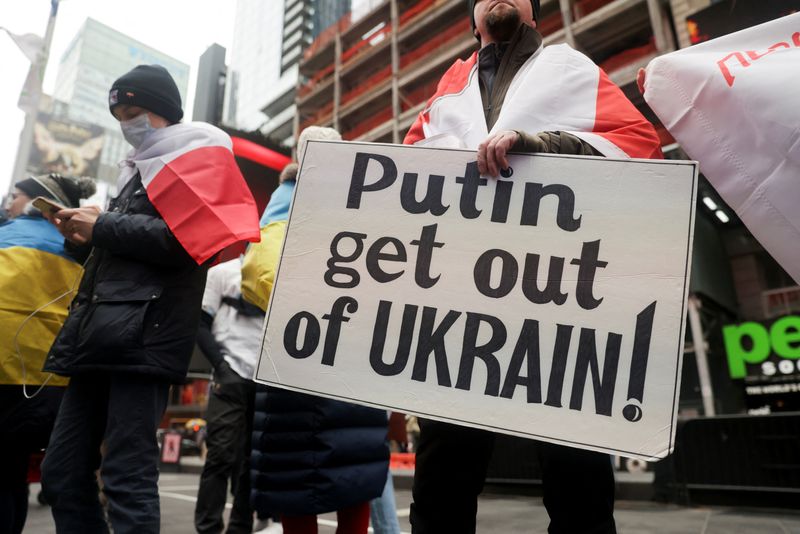 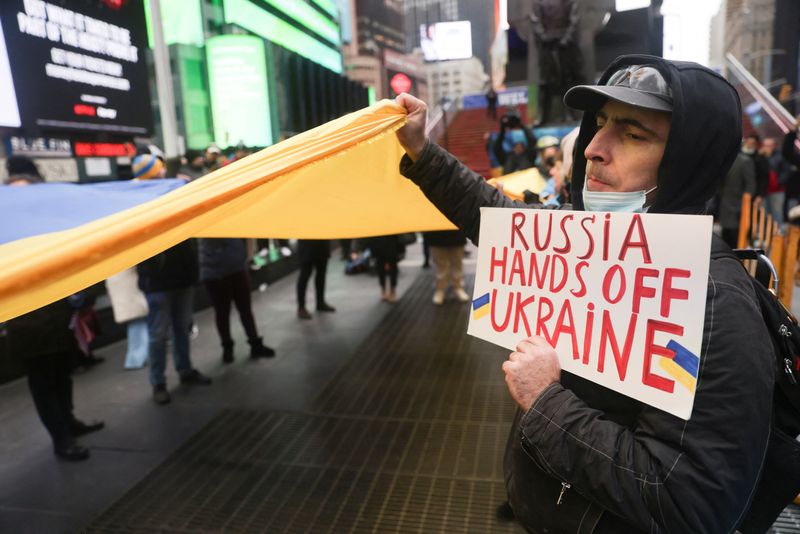 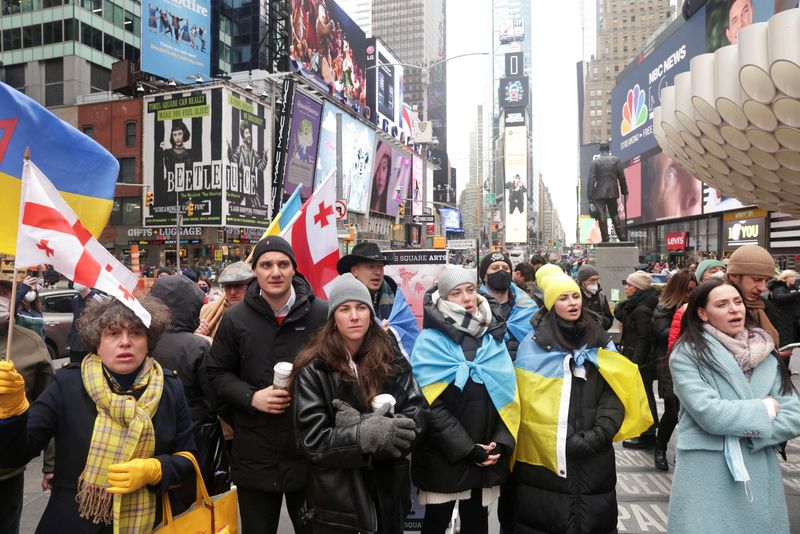 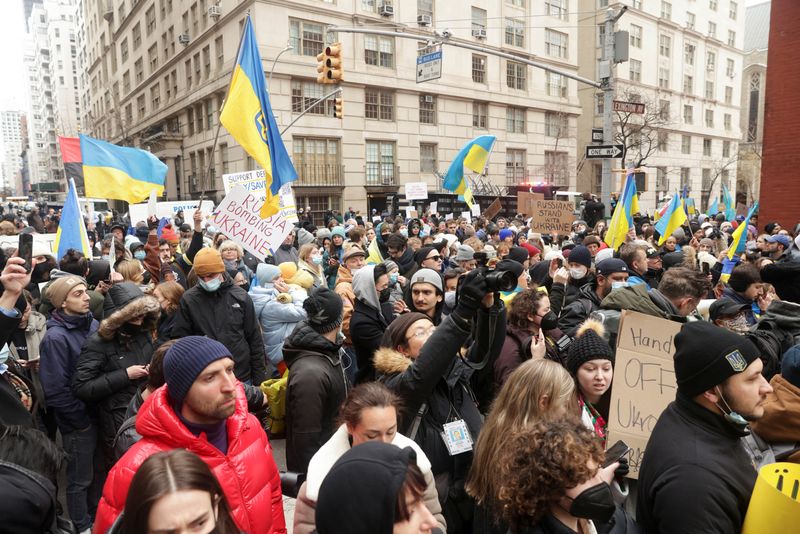 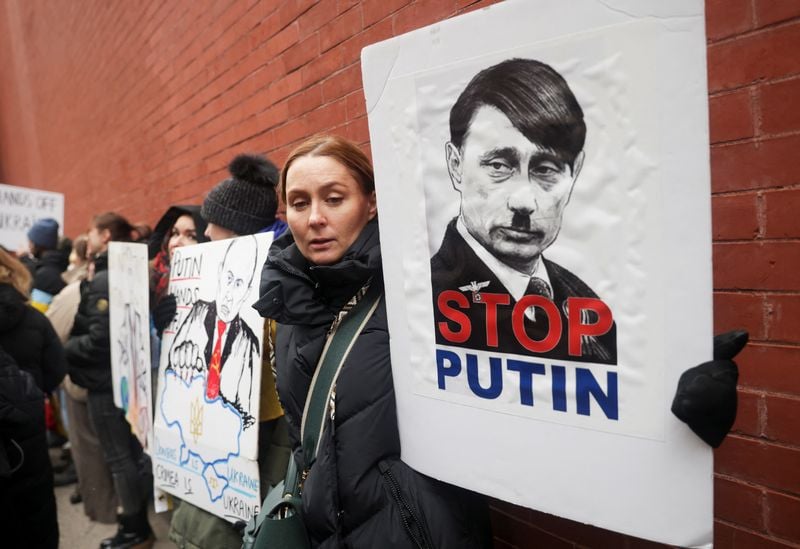