By Tom Sims and Carolyn Cohn

FRANKFURT/LONDON -European and U.S. bank shares on Friday clawed back some of the previous day’s steep losses as the sector started to get to grips with a slew of sanctions unveiled this week in retaliation for Russia’s invasion of Ukraine.

Shares got off to a jittery start as missiles pounded the Ukrainian capital and President Volodymyr Zelenskiy pleaded with the international community to do more, saying sanctions announced so far were not enough.

Investors have been on high alert for sanctions against Russia over fears of rippling complexity and compliance risks for global banks. But many U.S. and European industry executives say they had already reduced their exposure to Russia.

After early losses, leading European banks later edged up, with a European banking sector index 4.27% higher by mid-afternoon, having fallen 8% on Thursday.

After the market close late on Friday, the European Union said in a statement it had adopted further sanctions that will have “massive and severe consequences” for Russia.

The EU imposed a ban on issuing bonds, shares or loans in the bloc for refinancing Russia’s Alfa Bank and Bank Otkritie.

The bloc also set a cap of 100,000 euros for EU bank accounts of Russian citizens, who will not be allowed to buy euro-denominated shares, while Russian President Vladimir Putin and Foreign Minister Sergey Lavrov were put on the EU sanctions list.

Swiss financial watchdog FINMA told banks on Friday to freeze assets of people and entities on the EU’s sanctions list.

Behind the scenes, bankers said they and their lawyers were scrambling to determine the impact of sanctions.

Washington on Friday also imposed sanctions on Putin and Lavrov, following on from a tranche of sanctions against Russian banks and individuals on Thursday.

“What banks are focused on right now is updating their screening mechanisms within their compliance programs to make sure they are capturing all the entities that have been designated by the Treasury Department,” said Caroline Brown, a partner at Crowell & Moring in Washington.

Germany’s financial regulator, BaFin, said that it was in close contact with the banks it oversees regarding risks from the crisis and it expected full compliance with sanctions.

In a sign that sanctions were beginning to bite, the London Stock Exchange suspended the membership of VTB’s subsidiary VTB Capital.

In a report on Friday, JP Morgan analysts said sanctions would have a limited impact on banks directly and the bigger problem was the impact on the economy.

The prospect of higher interest rates had brightened the earnings outlook for banks after years of ultra-low and negative rates ate away at their profit margins.

On the ground in Ukraine, banks have been carrying out emergency measures. Germany’s Solarisbank said that it had evacuated its tech hub in Kyiv, which it opened last year with dozens of employees.

“It is sad to think that just one week ago, I was in Kyiv, working and developing business. Now we have to rebuild our plans and to adapt,” the bank’s Ukraine chief, Dumitru Condrea, posted on LinkedIn.

On Thursday, banks with the biggest exposure to Russia fell the most.

That included Austria’s Raiffeisen Bank International, which lost 23%, regaining 4.6% on Friday. Societe Generale, which lost 12% on Thursday, was up 4.2% on Friday.

Some investors had already cut exposure to Russia.

“We had our own screening view of what businesses would most likely be impacted through strong sanctions and that had been an area where we’ve been seeking to reduce our exposure,” said Andrew Formica, the chief executive of Jupiter Fund Management.

For European banks, the greatest concern has been that governments would cut Russia out of the SWIFT international payment network, but so far that hasn’t happened.

Bankers have argued cutting Russia off from the international payments network could seriously hurt its economy and everyday citizens, and would create enormous complexity and compliance risks for the global banking industry.

While Britain is pushing to cut Russia out of SWIFT, French Finance Minister Bruno Le Maire said on Friday that option would only be used as a last resort but is being assessed for its impact. 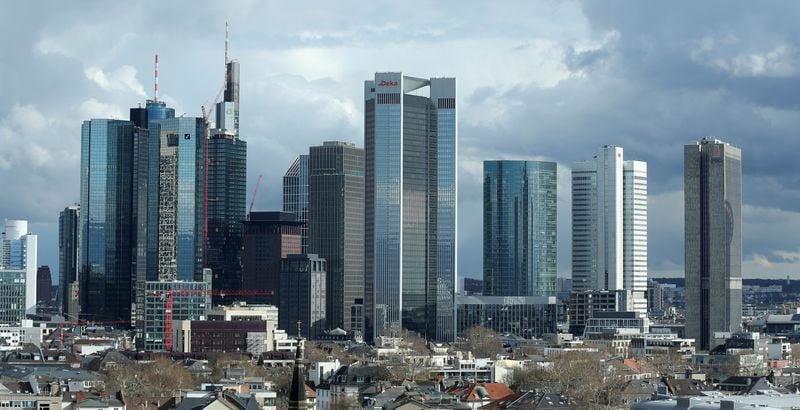