-The United States, Britain and other Western nations have hit Russia with new sanctions following Russian’s invasion of Ukraine on Thursday.

The European Union broadly agreed new measures, details of which were to be discussed by EU foreign ministers at an emergency session on Friday.

Japan said on Friday it would strengthen its sanctions to include financial institutions and military equipment exports, and Australia imposed more curbs.

Below are details on the measures proposed so far and what other sanctions could target Russia:

The United States and Britain announced restrictions that, combined with previous sanctions, would in effect kick the vast majority of Russian banking assets out of both countries. New targets included Sberbank and VTB Bank, Russia’s two largest lenders. [L1N2UZ2UK]

EU leaders have agreed sanctions targeting 70% of the Russian banking market and important state-owned companies, including in defence.

Russia’s large banks are deeply integrated into the global financial system, meaning sanctions could be felt far beyond its borders. Data from the Bank for International Settlements showed European lenders hold the lion’s share of the around $120 billion in foreign banks’ exposure to Russia.

According to data from Russia’s central bank, total Russian banking foreign assets and liabilities stood at $200.6 billion and $134.5 billion, respectively, with the U.S.-dollar share amounting to around 53% of both, down from 76%-81% two decades ago.

The coming package of EU measures EU will “target the ability of the Russian state and government to access the EU’s capital and financial markets and services, to limit the financing of escalatory and aggressive policies,” the bloc said. It will ban EU investors from trading in Russian state bonds.

Washington announced new restrictions on dealings in Russia sovereign debt on Tuesday. Americans – already barred from investing in Russian sovereign debt directly – will be banned from purchasing it in the secondary market after March 1.

Even before the latest events, access to Russian bonds had become increasingly restricted.

The United States, the EU and Britain have already imposed asset freezes, travel bans and other curbs on Russian individuals.

Britain will also introduce legislation to limit deposits that Russian nationals can hold in UK bank accounts. The limit will be 50,000 pounds ($66,860) at British banks.

The United States sanctioned Fradkov and Bortnikov on Tuesday, as well as Vladimir Kiriyenko, the son of a former prime minister.

Biden said on Thursday he would consider personal sanctions on Putin, a move Moscow has said would not harm the president personally but would prove “politically destructive”.

The EU has already imposed sanctions on five people who were involved in a Russian parliamentary election in annexed Crimea last September, and said it would blacklist all lawmakers who voted to recognise two regions controlled by pro-Russian separatists in eastern Ukraine, freeze any assets they have in the EU and ban them from travelling to the bloc.

The United States and the EU already have sanctions in place on Russia’s energy and defence sectors, with state-owned gas company Gazprom, its oil arm Gazpromneft and oil producers Lukoil, Rosneft and Surgutneftegaz facing various types of curbs on exports/imports and debt-raising.

Sanctions could be deepened, with one possible option being to prevent companies settling in U.S. dollars.

Nord Stream 2, a recently completed pipeline from Russia to Germany, was awaiting regulatory approval by EU and German authorities before Berlin put its certification on ice.

The U.S. on Wednesday imposed sanctions on the company in charge of building Russia’s Nord Stream 2 gas pipeline.

The EU has vowed to introduce measures to crimp Russia’s technological position in key areas – from high-tech components to cutting-edge software.

The U.S. Commerce Department said on Thursday it was implementing export controls that will severely restrict Russia’s access to semiconductors, computers, telecommunications, information security equipment, lasers, and sensors that it needs to sustain its military capabilities.

Similar measures were deployed during the Cold War, when sanctions kept the Soviet Union technologically backward and crimped economic growth.

One of the harshest potential measures would be to disconnect the Russian financial system from international payments system SWIFT, used by more than 11,000 financial institutions in over 200 countries.

Ukraine wants Russia removed from the system and the move is under discussion as the EU considers sanctions but leaders have been at odds over this.

British Prime Minister Boris Johnson has called for Russia’s exclusion from SWIFT, but German Chancellor Olaf Scholz said it should not be part of the second EU sanctions package. Biden said on Thursday Washington was not imposing a ban for now. 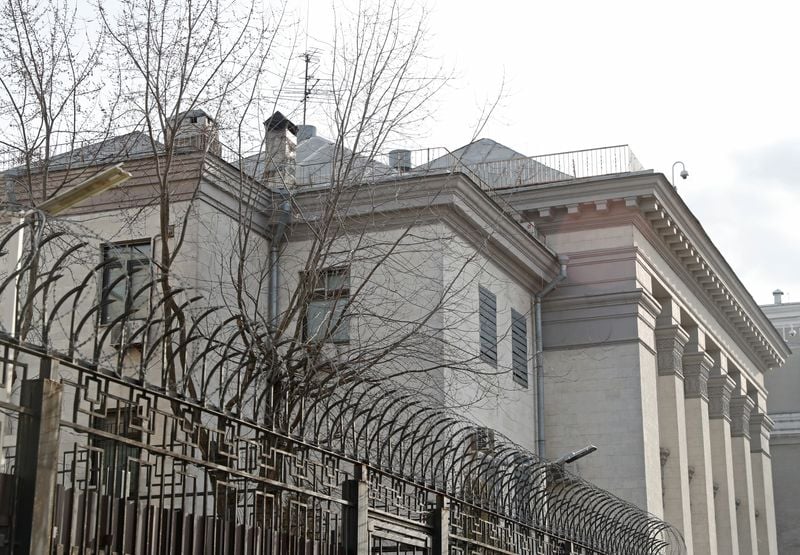