WASHINGTON -Ukraine has asked the International Monetary Fund for emergency financing, IMF managing director Kristalina Georgieva said on Friday, adding that the IMF was exploring all options to aid the war-torn country, including under its existing IMF loan program.

Georgieva said in a statement that she met with the IMF’s executive directors and “assured them that our staff will continue to work closely with the authorities to support Ukraine in every way we can.”

That includes exploring options for further financial support, including under the remaining capacity of about $2.2 billion in Ukraine’s existing $5 billion stand-by loan arrangement.

Georgieva also said the Fund was assessing potential implications for the functioning of the global financial system, on commodity markets and on countries with economic ties to the region.

“We stand ready to support our members as needed, in close coordination with our international partners,” including the World Bank, she said.

Earlier on Friday, Georgieva said that Western sanctions against Russia will add to the economic impacts of the war in Ukraine, which are primarily being transmitted through higher energy and grain prices, adding to inflation.

Georgieva, speaking at a Georgetown Law School event on Black History Month, also said that greater financial market uncertainty caused by the conflict may cause capital “outflows from emerging markets, when we need exactly the opposite — more financing going there.”

She also said that heightened regional tensions may impact economic activity in countries and regions surrounding Ukraine, such as Moldova and the Caucasus.

Russia is among the world’s biggest oil exporters and also is a major wheat exporter along with Ukraine, whose Black Sea ports have been closed to shipping.

Georgieva also said that she was concerned about her brother, who is married to a Ukrainian woman and who is currently in Kharkiv, Ukraine’s second-largest city, where heavy fighting is taking place.

“When I talked to him, I feel strongly for all — for his family of course, but for everybody there — to wake up to the sounds of bombing and to be unsure about what the next would bring,” said Georgieva, a Bulgarian economist who grew up during the country’s communist era. 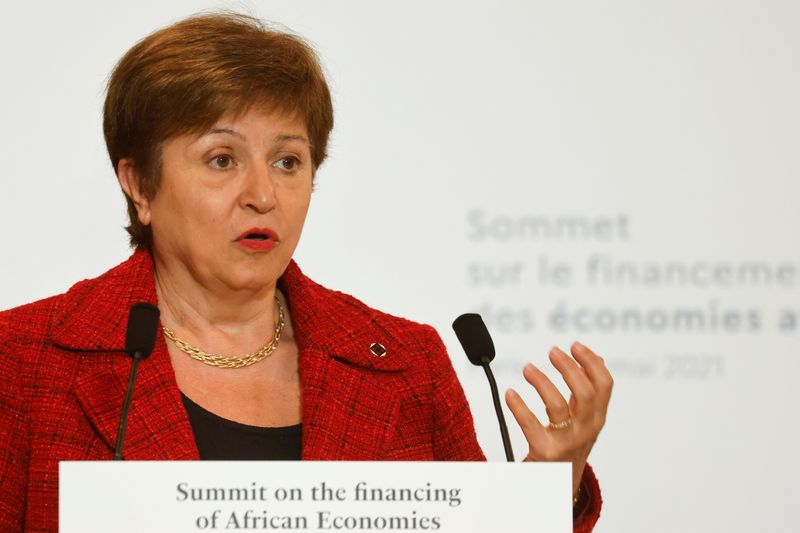