LONDON – Insurers have raised the cost of providing cover for merchant ships through the Black Sea, adding to soaring rates to transport goods through the region for vessels still willing to sail after Russia’s invasion of Ukraine.

Ship owners pay annual war-risk insurance cover as well as an additional “breach” premium when entering high-risk areas. These separate premiums are calculated according to the value of the ship, or hull, for a seven-day period.

Ship insurers have quoted the additional premium rate for seven days at anywhere between 1% to 2% and up to 5% of insurance costs, from an estimated 0.025% on Monday before Russia’s invasion began, according to indicative rates from marine insurance sources.

This would mean additional costs of hundreds of thousands of dollars for a ship voyage depending on the destination.

“Given the Russian offensive from land, sea and air, it would not be surprising if some insurers will be reluctant (to provide cover),” one insurance source said.

A Moldovan-flagged chemical tanker was hit by a missile on Friday near Ukraine’s port of Odessa, seriously wounding two crew.

On Thursday, a Turkish-owned ship was hit by a bomb off Odessa with no casualties and the ship sailed safely into Romanian waters.

Ukraine has appealed to Turkey to block Russian warships from passing through the Dardanelles and Bosphorus straits which lead to the Black Sea, after Moscow on Thursday launched a full-blown assault on Ukraine.

Russian forces landed at Ukraine’s Black and Azov Sea ports as part of the invasion.

Ukraine’s military has suspended commercial shipping at its ports although some Russian Black Sea ports remain open, including Novorossiisk, traders said on Friday.

“Due to the sea invasion potential and Crimea’s location in the Black Sea, freight destined for surrounding countries will likely see re-routings and longer transit to meet its final destination,” added Glenn Koepke with supply-chain tracking platform FourKites.

Mark Nugent, with shipbroker Braemar ACM, citing satellite tracking data, said a number of dry bulk vessels in the Black Sea had reversed course and were sailing towards the Bosphorus to exit the region.

Freight rates have jumped after shipping companies including the world’s top container lines MSC and Maersk and many oil tanker owners suspended sailings through the region.

Average earnings for smaller aframax tankers trading in the Black Sea jumped to over $100,000 a day on Thursday from $8,000 a day on Monday, shipping sources said.

Earlier this month, London’s marine insurance market added the Ukrainian and Russian waters around the Black Sea and Sea of Azov to its list of areas deemed high risk, which prompted some shipping companies to hold back on sending vessels into the area.

(Additional reporting by Michael Hogan in Hamburg and Carolyn Cohn in London; Editing by Nick Macfie) 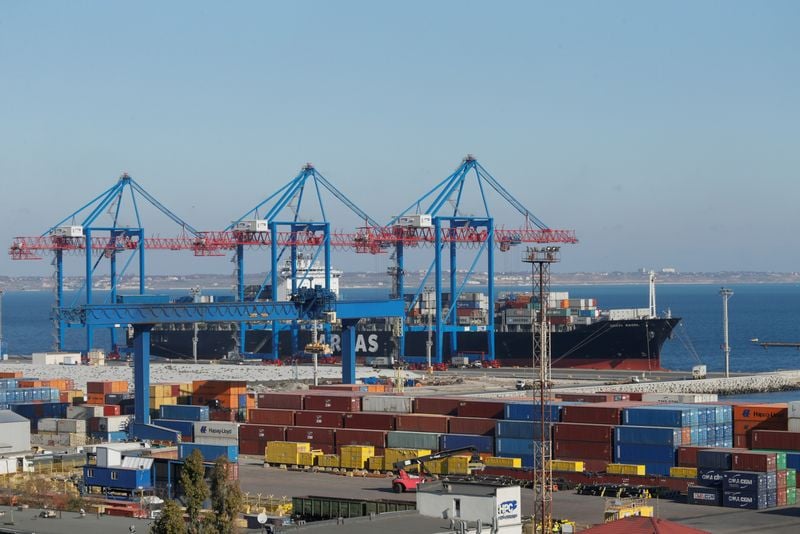