WASHINGTON – U.S. consumer spending increased more than expected in January, offering the economy a strong boost at the start of the first quarter, but price pressures continued to mount, with annual inflation surging at rates last experienced four decades ago.

Growth prospects were further brightened by other data on Friday showing solid demand by businesses for equipment last month. The reports from the Commerce Department suggested underlying strength in the economy that could sustain the expansion as the Federal Reserve starts raising interest rates to quell inflation, and provide a shield against the fallout from Russia’s invasion of Ukraine.

The first rate hike from the U.S. central bank is expected next month. Economists are anticipating as many as seven rate increases this year. Morgan Stanley boosted its first-quarter GDP growth estimate to a 5.4% annualized rate from a 3.8% pace. The economy grew at a 7.0% rate in the fourth quarter.

“The real economy appears to be in stronger health than we feared, suggesting that the Fed will push on with its planned rate hikes starting in March, although the Ukraine conflict makes a 50 basis points hike less likely,” said Paul Ashworth, chief U.S. economist at Capital Economics in Toronto.

Consumer spending, which accounts for more than two-thirds of U.S. economic activity, surged 2.1% last month after falling 0.8% in December. Spending was driven by purchases of motor vehicles, nondurable goods like apparel and recreational goods as well as outlays on heating amid freezing temperatures across many parts of the country.

But a resurgence in COVID-19 infections, fueled by the Omicron variant, undercut spending at restaurants and bars as well as at hotels and motels. Spending on air travel also fell.

Economists polled by Reuters had forecast consumer spending rebounding 1.5%. The surge in spending was despite consumer sentiment as measured by the University of Michigan slumping to a more than decade low.

Consumer spending is being supported by massive savings and strong wage growth amid a tightening labor market. That is offsetting a reduction in government money to households, following the expiration of the Child Tax Credit payments.

Personal income was unchanged last month as a 0.5% increase in wages was offset by a decrease in government social benefits. Economists shrugged off the drop in the saving rate, which fell to 6.4%, the lowest since December 2013, from 8.2% in December.

“Households, in aggregate, still have about $2 trillion saved up from earlier in the pandemic, and some of the January drop in saving came from a reduction in Child Tax Credit payments,” said Gus Faucher, chief economist at PNC Financial in Pittsburgh, Pennsylvania. “Households will adjust to the reduced tax credit and the saving rate will return to above 7%.”

Stocks on Wall Street rose for a second day. The dollar fell against a basket of currencies. U.S. Treasury prices were lower.

In the 12 months through January, the PCE price index jumped 6.1%. That was the largest rise since February 1982 and followed a 5.8% year-on-year increase in December.

Excluding the volatile food and energy components, the PCE price index soared 0.5% after advancing 0.5% in December.

With inflation well above the Fed’s 2% target, households’ buying power is being reduced. Income at the disposal of households after accounting for inflation fell 0.5%.

Price pressures could continue to spiral because of the Russia-Ukraine conflict. Brent crude prices on Thursday soared above $100 per barrel for the first time since 2014, before retreating to below $97 a barrel at one point on Friday.

When adjusted for inflation, consumer spending rebounded 1.5% in January after declining 1.3% in December.

Some economists believe growth this quarter would be below a 2.0% rate because of the drag from inventories.

Inventory investment accounted for the bulk of GDP growth in the fourth quarter. The Atlanta Fed is estimating the economy growing at only a 0.6% pace this quarter.

Households accumulated more than $2 trillion in excess savings during the pandemic. Subsiding coronavirus infections are likely to boost spending on services. The United States is reporting an average of 74,668 new COVID-19 infections a day, a fraction of the more than 700,000 in mid-January, according to a Reuters analysis of official data.

The economy got a lift from another report from the Commerce Department showing orders for non-defense capital goods excluding aircraft, a closely watched proxy for business spending plans, jumped 0.9% last month, beating economists’ expectations for a 0.5% gain.

“It would appear that capital spending is likely to make a solid contribution to first-quarter real GDP growth,” said Conrad DeQuadros, senior economic advisor at Brean Capital in New York. 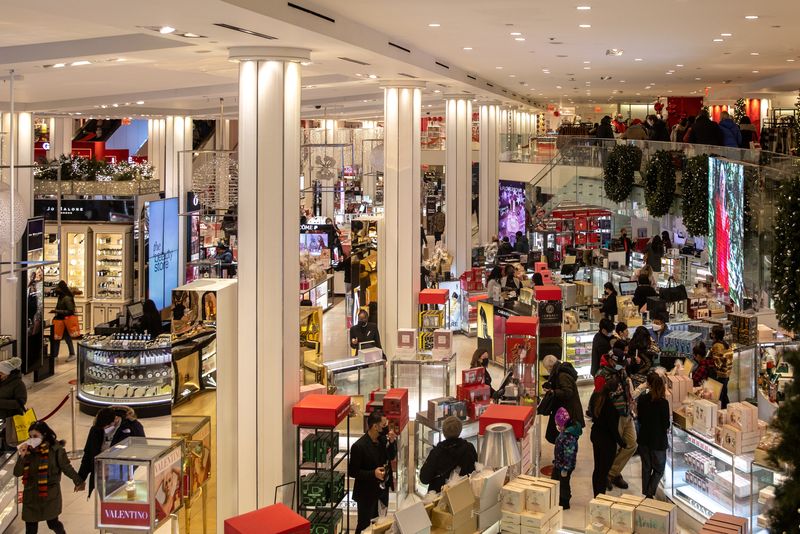